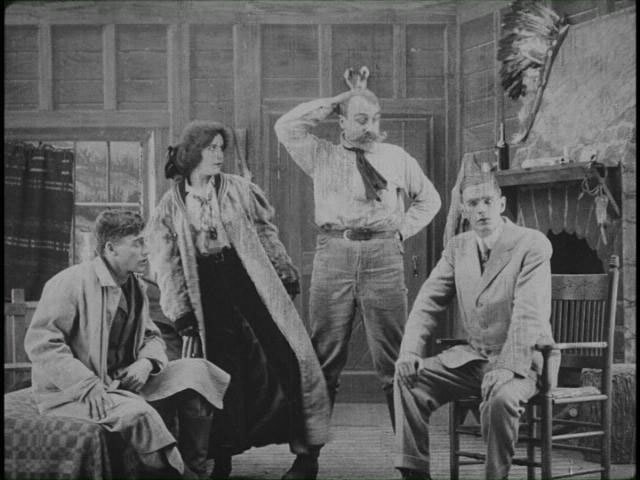 Although Pearl White (1889–1938) wasn’t the only serial queen of the 1910s, she was by far the most popular. In 1916 she was voted the top female star by readers of Motion Picture Magazine. Although she quit films in 1924, her name lives on as the most daring American action heroine of the silent era.

Born on a family farm in Green Ridge, Missouri, Pearl left home at 18 to join a traveling theater company. In 1910 she signed on with New York-based Powers Picture Plays, but soon moved on to Lubin, Pathé Frères, and the Crystal Film Company. In 1914 Pathé Frères lured her back to star in The Perils of Pauline. A huge hit, the 20-episode serial gave her a career-making role. Whether riding a steel girder 20 stories above Manhattan or exiting a plane via a dangling rope ladder, Pearl was famed for doing her own stunts. She came to epitomize the “new woman”—who, when the chips are down, proves herself just as tough as a man, and then some.

Although not a serial, The Woman Hater anticipates elements of Pearl White’s later films. It tells the story of Hal, a spurned socialite who retreats out West to escape all women. Much to Hal’s annoyance, his host’s niece, played by Pearl, shows up for a visit and becomes smitten. When Indians capture Hal and plan to burn him at the stake, the niece orchestrates his rescue. While Pearl doesn’t do any risky stunts, she’s no shrinking violet either. With a vigorous handshake and more-than-capable equestrian skills, she eschews traditional female roles and boldly goes after what she wants. As the film ends, Pearl, spoonfeeding the bandaged Hal, asks, “Do you hate all women?” All he can do is shake his head…and give her a kiss.

About the Preservation
The Woman Hater was preserved under the direction of George Eastman Museum from a tinted nitrate print discovered in 2010 at the New Zealand Film Archive. The preservation work was completed in 2012 by Colorlab Corp. and funded through a generous donation from Susan C. Weiner, as part of the NFPF’s Save America’s Treasures project. Thank you Susan!

About the Music
In addition to sponsoring the preservation of the film itself, Susan Weiner also enabled the NFPF to present The Woman Hater with a specially commissioned score by Michael D. Mortilla.

Further Viewing
Pearl White is only of the several serial queens who thrilled audiences of the 1910s. Mary Fuller’s exploits in The Active Life of Dolly of the Dailies (1914) can be seen in an episode titled “The Chinese Fan” (also discovered at the NZFA); the intrepid Helen Holmes stars in early episodes of The Hazards of Helen (1915), which can be sampled on More Treasures from American Film Archives and Treasures III; and Ruth Roland appears in the exhibitor’s reel for the “cyclonic Western serial” Hands Up (1918) featured in More Treasures.