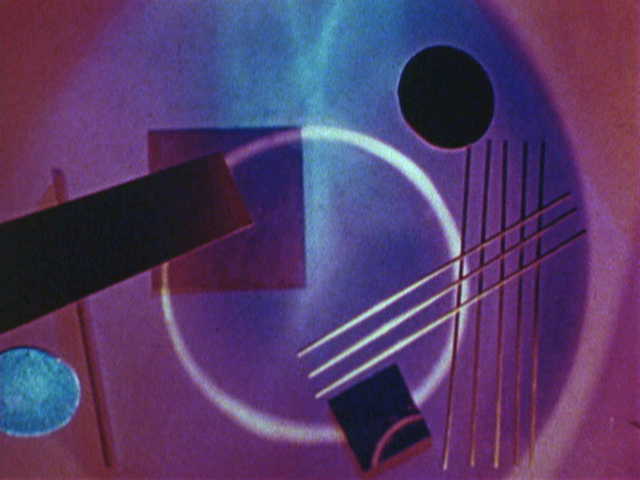 Made more than sixty years ago, Dwinell Grant’s Themis looks very modern, a constructivist painting bursting into life. Born in Springfield, Ohio, in 1912, Grant had trained at the National Academy of Design in New York and returned to teach at Wittenberg University in Spring­field. After seven years as a nonobjective painter, he became impatient with the limitations of canvas. As its full title suggests, Composition 1 (Themis) was Grant’s first film, “a simple attempt,” he said, “to add the element of time and motion to abstract composition.” He ani­mated the wood, glass, and paper forms by stop-motion, and his­ experience teaching stage lighting aided the film’s early color effects. Grant pushed his subsequent Compositions further into experiments with three-dimensional space, until Composition 4 (Stereoscopic) (1945) re­quired polarized glasses to experience its depth effects.

In 1940, he wrote about nonobjective painting in a way that also evokes that year’s Themis: “In creating it we do not say something about something else, but rather we produce a rhythm which is part of nature’s rhythm and just as deep and fundamental as a heartbeat.... Nature is not something to be commented on, it is something to be.”

The tradition of abstract animation on film that Grant advanced has remained known almost exclusively through its German pioneers, Walter Ruttmann and Oskar Fischinger, and through artists such as Fernand Léger, Man Ray, Lázló Moholy-Nagy, and Marcel Duchamp, who made occasional films in France. Grant and the U.S. filmmakers who preceded him, most notably Mary Ellen Bute, began to create nonrepresentational art on film before World War II, when it was little appreciated in America. They created “action painting” too early. Grant’s experimental filmmaking of the 1940s received little notice until its rediscovery and preservation by Anthology Film Archives in the 1970s. He returned to abstract filmmaking in the 1980s. Dwinell Grant died in 1991. —Scott Simmon

About the Music
The score is based—very freely—on a fugue by Antonin Reicha (1770–1836) that the composer published in 36 Fugues, op. 36 (1805). I made this choice for two reasons. First, many abstract films tend by their very nature to evoke the rhythms and textures of fugal polyphony. (Conversely, many experimental film animators have drawn abstract patterns to preexistent fugues, an approach demon­strated, even if somewhat clumsily, by the “visualization” of a Bach fugue in Disney’s Fantasia.) Second, it seemed best to use a polyphonic piece by a minor composer rather than by a giant of fugal style such as Bach or, to name one of Dwinell Grant’s great contemporaries, Paul Hindemith. The problem with using music by such eminent composers is that the structural logic is too strong: The music is apt to work against the film after a while, and it is too “well made” to be altered without wrecking the structure.

Enter Reicha. Although a minor composer, he took an innovative approach to fugue style, so that his music still sounds quite modern. At the same time, what he composed is not well known and certainly not sacrosanct; this makes it possible to mold a piece by Reicha to fit a film by Grant with the freedom the latter requires. —Martin Marks