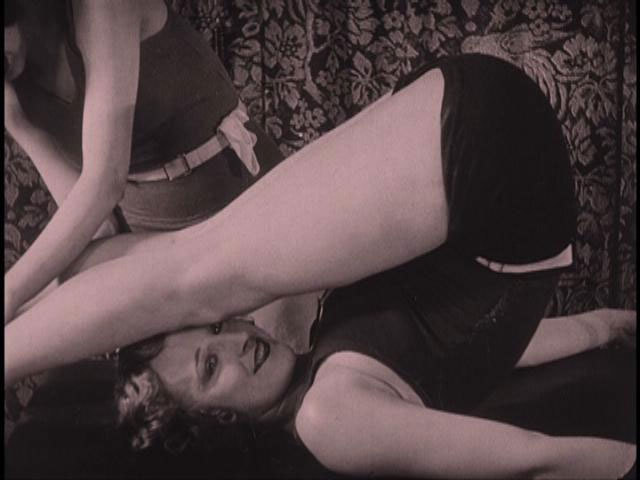 Torture de Luxe, a provocative peak at how Broadway beauties keep in shape, is a segment from Pathé Review, the American weekly begun in 1920 as “the Magazine of the Screen.” Leaving coronations, baseball playoffs, and other front-page events to its sister series Pathé News, the one-reel Review focused exclusively on human-interest stories like this profile of “Broadway’s beauty expert, Dr. Philadelphia Jack O’Brien.”

Torture de Luxe teases the audience with a glimpse of two ladies removing their stockings before moving on to its subject, “champion pugilist” Jack O’Brien (1878–1942). Born James Frances Hagen in Philadelphia, he left America in 1900 and returned two years later as the conquering hero who had brought defeat to 18 of Britain’s best boxers. In 1905, he won accolades as light heavyweight champion. O’Brien continued boxing until 1912, chalking up 93 wins and 14 draws in 120 matches.

The champ wasn’t just good with his fists. He excelled at PR right from the start, promoting his British victories to the folks back home via stories sent to the Associated Press. In launching his gym on Broadway in the 1920s, this marketing savvy served him well. The newly minted personal training guru publicized his regimen via a morning exercise show on New York radio and in a series of syndicated newspaper articles titled “How to Raise a Physically Perfect Daughter.” Torture de Luxe brings his fitness program to the big screen.

While ostensibly showcasing O’Brien, this Pathé Review segment reserves most of its attention to the shapely young women who demonstrate his exercise devices. Four decades after Edison’s invention, movies still knew how to conjure up their peep show roots.

About the Preservation
This film was preserved under the direction of George Eastman Museum from a tinted nitrate print uncovered in 2011 at the New Zealand Film Archive. The work was completed in 2012 by Colorlab Corp. with support from the NFPF.

Further Viewing
For another example of the visual delights offered up by Pathé Review, see Cockeyed: Gems from the Memory of a Nutty Cameraman (ca. 1925), featured in program three of More Treasures from American Film Archives.