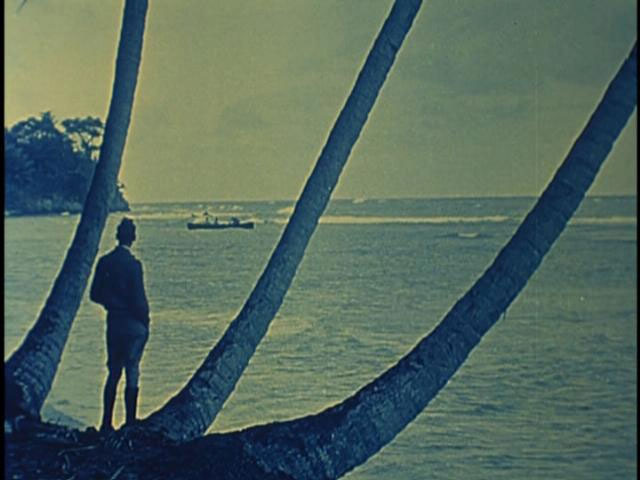 Three decades into the history of movies, short travelogues, called scenics, had become a regular part of the theater program. Among specialized producers of these films, Robert C. Bruce Scenics was in a class of its own.

Robert C. Bruce (1887–1948) had begun working for Educational Films in 1915. His scenics, sometimes inspired by literature, were among the most popular in the company’s catalog. By 1920, the company had become a travelogue specialist, acquiring Chester Comedies and Chester Scenics, arranging a distribution deal with the National Geographic Society, and setting up a distribution chain in Europe. In the same year, Educational Films sent Bruce to the West Indies for two months of location shooting. Working in Cuba, Jamaica, and nearby locales, he created such lyrically-titled shorts as Isle of Desire (1920) and The Log of the Viajera (1920). Tropical Nights was the first film released from this expedition.

Tropical Nights is a true “scenic.” Putting aside conventional narrative, the film tells its story by following the lights and shadows on a Caribbean island over the course of a diurnal cycle. As day evolves into night and back to dawn, the camera moves from close-up to striking vistas, with color toning accentuating the mood. For hometown audiences who had rarely traveled farther than their local theater, the film conjured up—in the intertitle’s words—“that indescribable Something which makes up a Tropical Night.”

Bruce produced, directed, or wrote almost 150 travelogue-style short documentaries between 1916 and 1934. They were available individually or as part of a package offered through the Education Film Corporation of America’s subscription service. The filmmaker was promoted to the press in 1920 as “the only scenic artist in the world who actually cuts and titles his own pictures.” (Whatever the truth of this, the intertitles of Tropical Nights are “branded” with his logo—the surname Bruce bounded by a tight circle.) Bruce’s skill as a cinematographer eventually led him to Paramount Pictures, where he filmed the studio’s first three-color Technicolor feature, The Trail of the Lonesome Pine (1936).

(Many thanks to Feroz Hassan, a graduate student of Richard Abel at the University of Michigan—Ann Arbor, for his informative paper about this film.)

About the Preservation
Tropical Nights was preserved by George Eastman Museum from a tinted 35mm nitrate print found in the New Zealand Film Archive in 2010. The work was funded by the National Film Preservation Foundation.