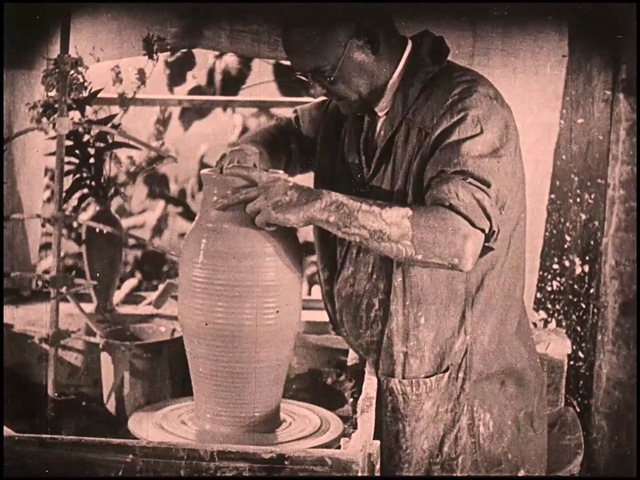 Rookwood Pottery was founded in Cincinnati in 1880 by Maria Longworth Nichols, the daughter of Nicholas Longworth, a winemaker, a pioneering viticulturist, and one of America’s wealthiest men. Nichols was determined to make pottery similar to the pieces coming out of France in the mid-1870s as well as works based on the Japanese aesthetic that had become influential after the opening of Japan to the West in the 1850s. Fine pottery requires gifted artists, and Nichols found many at the local Art Academy of Cincinnati and in one instance hired a Japanese ceramic painter, Kataro Shirayamadani, who became one of Rookwood’s best, working there from 1887 until 1948.

Nichols’ efforts to produce pottery worthy of international acclaim led Rookwood to win top prizes in major competitions, including the Exposition Universelle (Paris, 1889 and 1900), the Pan-American Exposition (Buffalo, 1901), and the Louisiana Purchase Exposition (St. Louis, 1904). Over the years, Rookwood sustained its success with a combination of amazing and competent technology and well-trained artists who could translate their ideas into works of clay.

Among the finest producers of art pottery, Rookwood was both a factory with a clear division of labor and an artist colony that nurtured the abilities of scores of talented people.

The division of labor at Rookwood was not different from that of any other factory mass-producing a product except for the fact that the product was some of the highest-quality art pottery created in the world from 1880 until the present day. When this film was made in 1925, Rookwood had reached a high point in pottery making, achieving a rare meeting of technical skills and great artistry. Each vase was the sum total of effort by a dozen workers—from those who worked the clay to make it pure, to the potter who formed the wet clay into a vase form, to the artist who imparted a unique design on the vase using liquid clay and metal oxides for color, to the kiln men who fired the vase and the glazer who added the final finish before the final firing in the giant beehive kiln.

Having been a dealer and collector of Rookwood for nearly 50 years, I am amazed to see moving images of the Rookwood artists at work. Artists whom we collectors talk about as if they were acquaintances suddenly come to life, working on pieces that might actually be in someone’s collection or come on the market someday. The names we know and admire now have facial expressions and movement. We can see them making the Rookwood pottery that we love and cherish.

Although we don’t know the mixers and kiln men shown in the film, we can identify master potter Rueben Earl Menzel (employed at Rookwood from 1896 until 1959) throwing two pieces that he will hand off to the artists for decoration. We also see Sara Sax, a longtime decorator at Rookwood (1896 until 1931) and a personal favorite. Then comes William Hentschel (at Rookwood from 1907 until 1939), a master of art deco design working on a floral vase, followed by someone we assume to be Lenore Asbury (employed from 1894 until sometime after 1931). There are few still photos of Asbury, but the vase painting shown in the film is enough to make me believe it is her.

We always wonder what it would have been like to be at Rookwood when some of the things we collect were made: to hear what the artists had to say about their work and to see the pieces emerging from the kiln to be evaluated by the Rookwood staff and artists to determine if they are a major success or a terrible failure.

At least we now have a glimpse into the workings at Rookwood and an opportunity to witness some of the creative people whose works have inspired our appreciation of art pottery. Rookwood Pottery continues to operate in Cincinnati, keeping the tradition of fine ceramic art alive and thriving.

About the Preservation
Uncommon Clay was preserved in 2016 at Colorlab Corp. using the only known surviving element: a 35mm tinted nitrate print from EYE Filmmuseum. The intertitles were translated from the Dutch and are modern re-creations. The work was supervised by the Academy of Motion Picture Arts and Sciences and funded through a National Endowment for the Humanities grant secured by the NFPF.