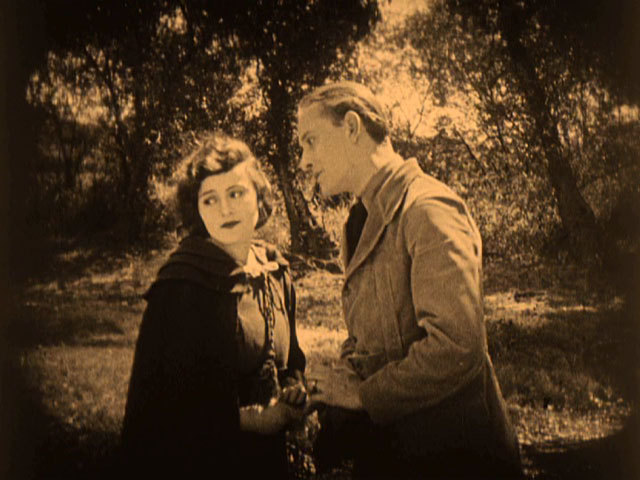 Trade publications like Exhibitor’s Herald had little doubt about the appeal of the Spiritualist-themed Unseen Forces: “it is expected that exhibitors will capitalize [on] the current interest in matters relating to spirit communication and life after death by showing this feature.” Spiritualism had reached its height after World War One, when many longed to communicate with the recently dead. Among those were the movement’s most famous leaders, physicist Oliver Lodge and Arthur Conan Doyle, creator of arch-rationalist Sherlock Holmes (“The world is big enough for us. No ghosts need apply.”).

According to a publicity piece for Unseen Forces, star Sylvia Breamer was “a staunch supporter of Sir Oliver Lodge and claim[ed] that she herself communicated with her dead father, the late Commander Breamer of the British Navy.” In the film, Breamer’s character, Miriam Holt (“the girl who sees around corners”), proves her psychic powers by locating children who went missing during the war. Her childhood love Clyde Brunton (Conrad Nagel) is unhappily married to a social climber, but Miriam’s ability to commune with the spirits of the dead (“those we love are always with us”) finds a way to resolve the problem. Missing scenes caused by nitrate decomposition along with post-release edits blur the lines of the dramatic love triangle, but the story remains fully comprehensible, despite occasional choppiness.

Director Sidney A. Franklin, who also served as producer, a role he would resume at MGM with pictures such as Mrs. Miniver (1942) and The Yearling (1946), was then an up-and-coming talent. Having started out directing children’s films with his brother Chester, he ascended to star vehicles for Norma and Constance Talmadge, Mary Pickford, and Marion Davies before crafting prestige adaptations such as Private Lives (1931) and The Good Earth (1937).

Franklin invests Unseen Forces with enough stylish verve to overcome the treacly spirituality of the story. His compositions use linear perspective to draw the viewer through space with the assurance of a skilled medium conducting a séance. Stuffy interiors are contrasted with ethereal pastorals; during a snow scene the camera is mounted on a toboggan. Instead of a flashback, there is a playful movie-within-the-movie, with characters reacting to themselves in the audience. Variety, praising Franklin for “bringing points to a nicety,” deemed Unseen Forces “a program feature of merit” that “should appeal to the female followers of the screen.” Regardless of sex, today’s viewers might still feel the power of Unseen Forces.

About the Preservation
Unseen Forces was preserved at Colorlab Corp. under the direction of the Library of Congress from a 35mm tinted nitrate print found in the collection of the New Zealand Film Archive in 2010. The work was funded with the support of Turner Classic Movies as part of a Save America’s Treasures project organized by the NFPF.

Further Reading and Viewing
Kevin Brownlow provides an overview of Franklin’s career in “The Modest Pioneer: Sidney A. Franklin” (Focus on Film, No. 10, 1972). Sidney and Chester’s children’s film Gretchen the Greenhorn (1916), is available on the NFPF’s DVD set More Treasures from American Film Archives. Chester’s solo work The Toll of the Sea (1922), the earliest surviving feature in the two-color Technicolor process, appears in Treasures from American Film Archives. Several of Sidney Franklin’s star vehicles are represented in Rags and Riches: The Mary Pickford Collection (Milestone) and The Constance Talmadge Collection (Kino Lorber).