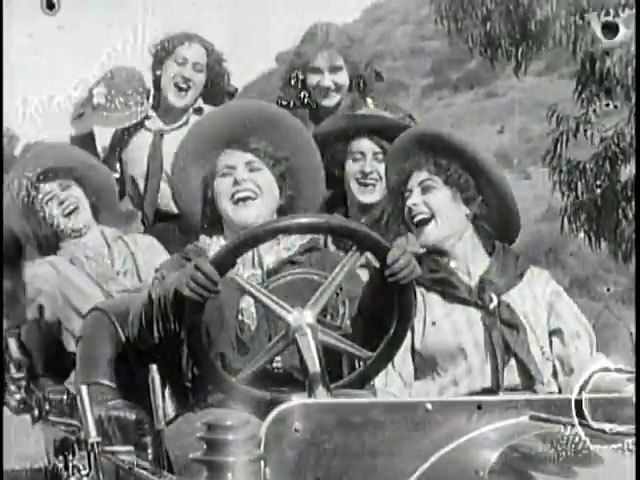 The concept for Walk,—You, Walk! is as old as the battle of the sexes: When Rose’s date tries to get fresh, she walks out and teaches him a lesson, with the help of her sister. What makes this 1912 Kalem comedy so much fun is the sheer pleasure shown by the women in outsmarting the men. It’s a Kristen Wiig comedy 100 years ahead of its time.

The resourceful sisters are played by Ruth Roland and Marin Sais, two Kalem girls who starred as take-charge heroines throughout the late teens and early 1920s. Born into a San Francisco theatrical family, Roland started at Kalem in 1909 and was soon churning out 50 films a year at the Los Angeles studio. Boxing, riding, swimming, diving, shooting—Roland did whatever her roles required, moving effortlessly from Westerns to comedies, dramas, and finally serials. With her big break in the popular Girl Detective series, she switched to Balboa Amusement Producing Company and eventually formed her own production company. Longer than any other serial queen, she thrived in the action roles that, by the early 1920s, were increasingly being given to men. In 1923, having amassed a fortune through movies and real estate, she gave up production work and rarely appeared in movies afterwards. Marin Sais, the scion of the old Alta California family that gave Marin County its name, assumed the Girl Detective lead on Roland’s departure and continued with Kalem in such two-reel detective, Western, and adventure serials as Mysteries of the Grand Hotel, The Girl from Frisco, and American Girl. In the late teens, the actress branched out into serious dramatic features, playing opposite matinee idol Sessue Hayakawa, but with her marriage to cowboy star Jack Hoxie, she returned to her roots. Sais continued as a B-Western regular through the 1930s and 1940s.

Lest the nitrate decay that starts at minute seven discourage viewing from start to finish, a few plot points are helpful. When Sam takes Rose for a spin in his new car, he can’t resist making a pass. The irate Rose walks back to the ranch and complains to her sister Nell. The two decide to turn the tables. At Nell’s invitation, Sam drives the sisters back to the same deserted road and scampers out to pick a bouquet. The sisters speed off laughing, leaving Sam to walk the same dusty road back. Soon the sisters pick up girlfriends for a joy ride and have the law on their tail. But the posse is no match for them. When the car breaks down, the girls take to the hills and double back to steal the horses, leaving even more men to eat dust. It won’t spoil the ending to reveal that the girls get off scot-free.

While Moving Picture World dismissed Walk,—You Walk! as “a rather dull farce,” Kalem knew its niche. Streaming to movie theaters in the early teens were more and more female moviegoers, who took orders from men at home, sweat shops, factories, and offices, and hungered to see actresses take control on the big screen. In fact, this one-reeler may have struck a little too close to home. The same reviewer who snubbed the comedy as “filler” also wrote about a kerfuffle during its screening: It seems that while watching Walk,—You Walk!, a group of girls so outraged a young man that he tried to hit one of them in the face. Fortunately a “country cop” stepped in and “jerked him away so that he fanned the air.” Now that’s a guy who can’t take a joke. Enjoy!

About the Preservation
Walk,—You, Walk! was preserved under the direction of the Library of Congress from a black-and-white nitrate print uncovered at the New Zealand Film Archive. The work was completed in 2010 by Colorlab Corp. with support from the NFPF.

Further Viewing and Reading
For a peek at Ruth Roland as the “Amazon of a hundred perils”, see the exhibitors’ reel for Hands Up—A Cyclonic Western (1918) included in the NFPF’s More Treasures DVD set (2004). Other active Kalem heroines save the day in The Confederate Ironclad (1912) in Treasures from American Film Archives: Encore Edition (2005) and in Mexican Fillibusters (1911) in the NFPF’s Treasures 5: The West (2011).

Shelley Stamp’s Movie Struck Girls: Women and Motion Picture Culture after the Nickelodeon (2000) includes a chapter about the serial queens of the 1910s.