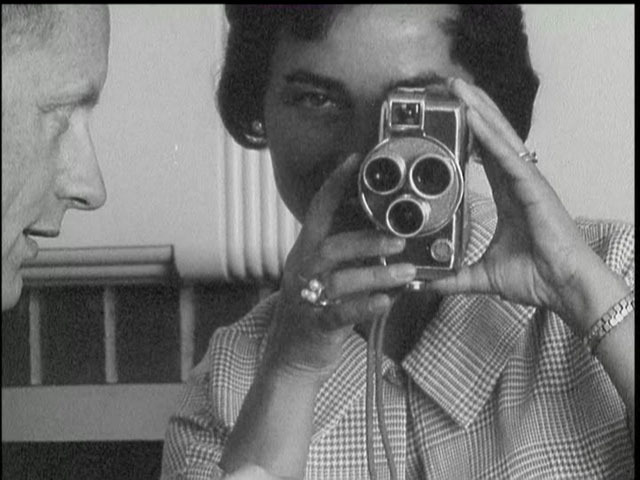 In 1923 Eastman Kodak unveiled a film stock that would radically expand the scope of filmmaking. The company’s 16mm reversal safety film brought motion picture technology out of the exclusive domain of the professional studios and into the homes and workshops of amateur filmmakers. Cheaper, safer, and easier to use than 35mm film, the new stock was squarely marketed at a movie-obsessed public eager to tell its own stories. Local clubs soon sprung up across the United States, and in 1926 a national organization, the Amateur Cinema League, was founded in New York City. With the introduction of 8mm in 1932 and color Kodachrome in 1935, the amateur ranks grew even larger.

While Hollywood marshaled its industrial resources for theatrical features, amateur filmmakers shot their own low-budget narratives starring family and friends. Home moviemakers documented subject of personal interest—from birthday parties and town parades to the 1932 Olympic competition and the building of Hoover Dam. Made for fun, not commercial return, amateur films could experiment with techniques and approaches and became a testing ground for some avant-garde filmmakers.

This “anything goes” spirit can be seen even in an ostensibly straightforward film like Welcome San Francisco Movie Makers, made by Dr. Frank S. Zach to welcome new members to the amateur film club. It begins with a nod to Hollywood—a shot of the Golden Gate Bridge inspired by Vertigo—followed by a quick series of panoramic views of the city. Having established the location, the film moves on to its central purpose—to introduce the club and explain the basics of amateur filmmaking.

The second half of Welcome San Francisco Movie Makers consists of a fairly detailed demonstration of the film hobbyist’s tools: camera, projector, and sound recording system. These carefully staged sequences reveal that the popularity of home moviemaking was partially due to its “gear-head” appeal. Magazines like Popular Science routinely featured articles—and advertisements—targeting the amateur filmmaker.

These how-to sequences also illustrate the personal angle of amateur filmmaking that made it attractive to so many. Accompanied by a music track, Dr. Zach’s wife Helga and her partner give a technical demonstration, not in a film lab but in the comfort of a living room, where they sneak glances with each other and the filmmaker Dr. Zach. Such intimacies break down the “fourth wall” typical of commercial narratives to create the feeling of a shared experience between audience and filmmaker.

Seen today, Welcome San Francisco Movie Makers presents a cinematographic survey of San Francisco prior to the urban development of the past 50 years and offers a rare glimpse at the workings of an amateur cinema club. But it’s the quirky, personal touches that make it such a memorable film.

About the Preservation
The original 16mm reversal print of Welcome San Francisco Movie Makers was among several of the late Dr. Zach’s films deeded to the San Francisco Media Archive by his wife Helga. It was preserved by the SFMA in 2002 with a grant of contributed services from the NFPF. The preservation work and video reference copy were donated by Colorlab and Erickson Archival Telecine.

About the Archive
The San Francisco Media Archive specializes in the collection and preservation of amateur, educational, and industrial films, particularly those related to the San Francisco Bay Area. Its collection includes more than 50,000 films, tapes, and other moving image materials. The archive organizes public screenings and hosts Home Movie Day in San Francisco.