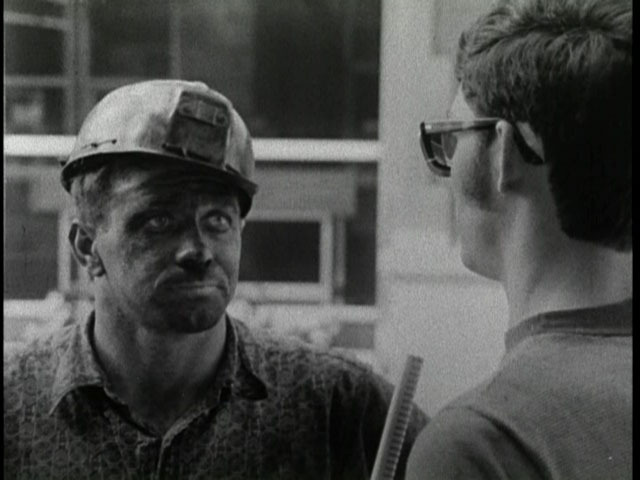 “Could you tell us…your opinion about young people ‘round here—what do they have to do?” begins this 1971 profile of Whitesburg, Kentucky, a hamlet of 1,137 in southern Appalachia. “Next to nothing,” answer a thoughtful miner, a young housewife, businessmen, and other townsfolk captured in one-on-one interviews with students of Whitesburg High School. Not much, that is, until Appalshop opened its doors.

Founded in 1969 through a joint project of the Office of Economic Opportunity and the American Film Institute, Appalshop started operations in an abandoned tire shop with a goal of training locals for film and television careers. The federal War on Poverty program initially put 16mm movie cameras into the hands of unemployed teenagers. As the OEO and AFI support ended, Appalshop was able to find new funding sources that made it possible to branch into recording music and storytelling, broadcasting radio, publishing books and magazines, starting a theater group, and hosting a photography workshop—all documenting the culture, traditions, and social issues of the region.

Whitesburg Epic, like other films from Appalshop, shows a community through the eyes of its own inhabitants. In this small town “epic,” people speak directly to the camera about unemployment, student unrest, and the Vietnam War. The down home candor of the exchanges presents a revolutionary alternative to the voice-over narration then common in commercial productions. Stripped to the basics, the documentary has an energy and immediacy only possible in a film made by the participants themselves.

A striking evocation of a specific time and place, Whitesburg Epic continues to be a local favorite. Three decades later the film inspired students of Whitesburg High School and New York University’s Tisch School of the Arts to collaborate on a video remake, Whitesburg Epic 2005, in which residents discuss the still relevant topics of the tedium of small town teenage life and American participation in foreign wars. Nor does the documentary’s influence end there. After its NFPF-funded preservation, the Appalachian Media Institute screened the film as part of its summer training program, enabling one generation of students to learn from another across the span of four decades. Now, thanks to this online presentation, Whitesburg Epic can be seen by anyone with an Internet connection—including high school filmmakers everywhere.

About the Preservation
Working from the original 16mm dupe negative and optical track negative, Appalshop restored the sound track and created a preservation negative and viewing prints.

More Information
During 2010 and 2011, Appalshop is celebrating its fortieth anniversary. Many of its films are available for purchase or online sampling on its Web site, www.appalshop.org.