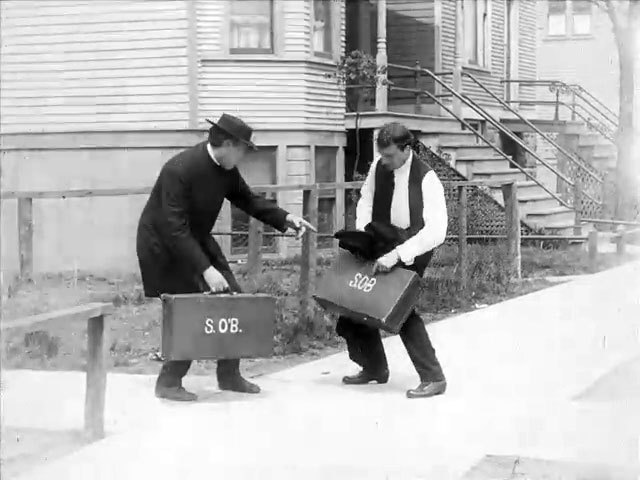 The Essanay Film Manufacturing Company is regarded today as one of the important early American motion picture studios. It was formed in Chicago in 1907 by George K. Spoor and Gilbert M. Anderson (the “S and A” of the company name). Spoor was a former opera house manager who began providing films to vaudeville houses with his Kinodrome Company and National Film Renting Company and was looking for more product to distribute. Anderson had worked, not too successfully, as an actor onstage and in vaudeville before getting involved in early movies. After working at the Edison Manufacturing Company, where he played multiple roles in The Great Train Robbery (1903), he began writing and directing for the Vitagraph Company of America and Selig Polyscope Company. The pair made a good team, as Anderson had the filmmaking know-how and Spoor the business experience.

From the start Essanay was strong on comedy. Its first release was An Awful Skate; or, the Hobo on Rollers (1907), and its title character, a hobo who dons roller skates and runs into all kinds of innocent pedestrians, was played by its first full-time employee, Ben Turpin (who besides performing also filled in as carpenter, scene painter, prop man, and janitor). At the beginning the company had no real studio space, using an open lot behind Spoor’s Kinodrome business with hanging painted canvases for interiors, so its films were essentially shot entirely on the streets of Chicago. Three years later Who’s Who still has a bit of that feel, as aside from three interior sets the rest of the film is shot in real locations like the train station and a couple of streets (where you can see a few puzzled-looking bystanders). The best-known actor in the short is J. Warren Kerrigan, the handsome young guest at the fake minister’s reception, who started working at Essanay, moved to the American Film Manufacturing Company, and eventually became a popular leading man and the star of The Covered Wagon (1923).

As with the first films Who’s Who is a split-reeler, a short and sweet five or six minutes that would be released with another comedy split-reeler. Who’s Who’s companion film was You Stole My Purse, a trifle, featuring Augustus Carney, about a poor husband who accidentally gets another woman’s purse in his coat pocket and all the hell that’s visited on him when his wife and mother-in-law find it. Together the shorts were touted in the company’s advertising as “a reel of exceptionally clever comedy with the usual snap and life, characteristic of the Essanay product.” The plot of Who’s Who, about a minister and a rough-and-tumble type who are mistaken for each other, was a popular theme and used many times, most memorably in The Wrong Mr. Fox (1917) with Victor Moore and Charlie Chaplin’s The Pilgrim (1923).

At the time that Who’s Who was made G.M. Anderson was heading out West and would soon set up his operations in Niles, California, where he had the necessary locations for his Broncho Billy Westerns and rural “Snakeville” comedies. George Spoor stayed in Chicago and produced a gamut of comedies and dramas. In 1915 Essanay hired Charlie Chaplin away from Mack Sennett for a year’s worth of wildly popular shorts, but after he moved on the studio’s fortunes ebbed, and it closed in 1918.

About the Preservation
Who's Who was preserved in 2014 at Colorlab Corp using a 35mm nitrate print from EYE Filmmuseum. The work was supervised by the Library of Congress with funding provided by the National Film Preservation Foundation.