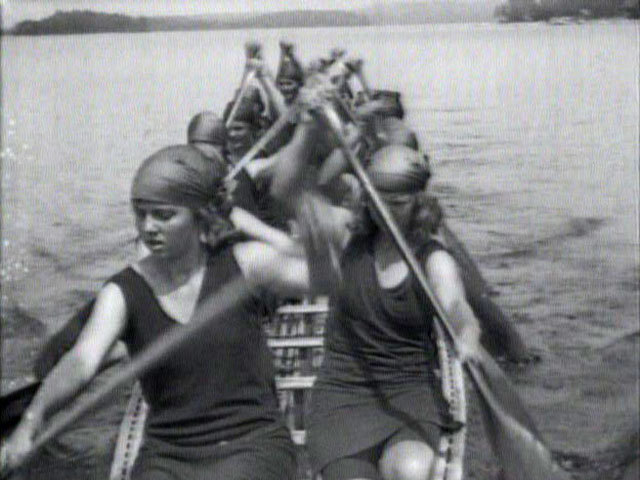 For information about accessing this film, please contact the Northeast Historic Film.

"On the shores of Lake Sebago, Maine, dozens of radiant clear-eyed girls made the Luther Gulick camp, Wohelo, their own." So begins this promotional film about the pioneering all-girls summer camp founded by Dr. Luther Halsey Gulick and his wife Charlotte Vetter Gulick in 1907. The camps name, Wohelo, was coined by Charlotte from the first two letters of the words Work, Health, and Love, the three principles that inspired the Gulicks in their lifelong dedication to helping children and adolescents live "a well rounded life a vivid, intense life of joy and service."

The son of Congregationalist missionaries, Luther Gulick brought a near religious zeal to his interest in childhood development. By all accounts, he was a remarkable person: founder of the YMCA Athletic League; Director of Physical Education in the New York Public Schools; and President of the Camp Fire Girls, which he established with his wife in 1910. Luther also designed the YMCA’s triangular logo (symbolizing the interrelationship of body, mind, and spirit) and helped invent the game of basketball when he asked a young YMCA instructor to create an indoor sport emphasizing teamwork.

Charlotte Gulick was no less remarkable. She was the driving force behind Camp Wohelo, which grew from a family camp that she and her husband had started in Connecticut. Charlotte ran the camp and designed the educational programs that would later become an essential component of the Gulicks’ work with the Camp Fire Girls. When the family camp outgrew its grounds, Charlotte decided to establish a summer camp in Maine: Wohelo.

But although it delivered, as the films first title card says, "an intensive course of outdoor work," Wohelo was a camp with an educational mission. The film shows that fun was an important aspect of the curriculum. We see the girls involved in a wide range of activities, from jewelry making and pottery to canoeing, gardening, and horseback riding. While watching Charlotte Gulick start a fire without matches may remind viewers today of the trials and tribulations of Survivor, Camp Wohelo was definitely not an exercise in survivalism. Constantly foregrounded are the principles of play and cooperation, best exemplified by the scene of a group of girls making a synchronized backwards dive off of their canoe. As the title card reminds, it is "the spirit of camaraderie that makes for perfect teamwork."

Today, we may take organizations like Camp Fire and Girls Scouts for granted, but back in the early 1910s before the ratification in 1920 of the Nineteenth Amendment, which gave women the right to vote, the creation of all-girl camps was a revolutionary development towards equality of the sexes. While Luther Gulick sometimes gets the lion's share of credit for founding Camp Fire Girls, the film suggests that he was, in the words of a title card describing a scene of Charlotte Gulick holding a boy toddler, "one small warrior in a camp of Amazons." Wohelo Camp, filmed a year after Luther’s death, is a fascinating tribute to the pioneering organization that preceded Camp Fire and to its matriarch Charlotte Vetter Gulick and her "Amazon" girls, "hard as nails and dipped in sunshine."

About the Preservation
The single known surviving print of Wohelo Camp, placed on permanent loan by Wohelo–The Luther Gulick Camps, was preserved by Northeast Historic Film in 2002 with a grant from the National Film Preservation Foundation. A 35mm preservation negative was created, as well as a new viewing print.