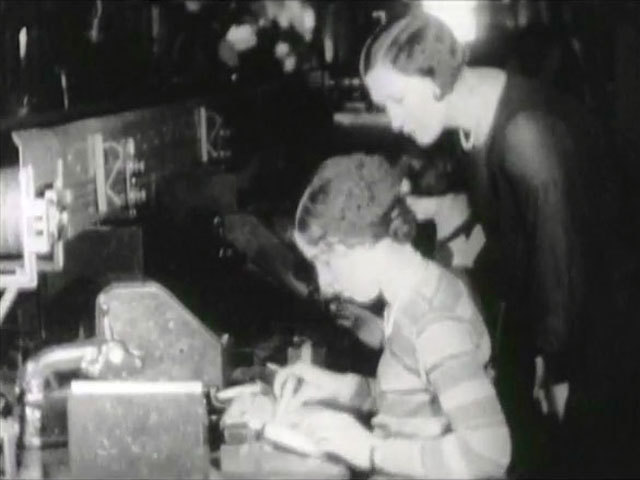 For information about accessing this film, please contact the National Museum of American History.

This film and its new music score, along with the following program notes, originally appeared in Treasures from American Film Archives.

The use of film for in-house corporate training received a boost in the mid-1920s with the introduction of easy-to-use 16mm cameras. Early training films, originally intended only for employees, are now a time capsule of past technologies, working conditions, and corporate culture.

Seen here are the opening and conclusion of a longer and more technical film made in late 1928 or early 1929 by Western Union, when the near monopolistic telegraph company was at its height. Nine­teen twenty-nine marked the zenith of U.S. communication by telegraph, with 284 million telegrams sent that year. The Depression cut that number by almost half, and inroads soon came from emerging communication methods—teletype, long-distance telephone, and airmail.

Accuracy First is part of a series of 16mm films made by Western Union to standardize training for telegraph operators across its far-flung branches. Other didactic titles included Keyboard Errors (illustrating the hazards of long fingernails and the “heavy thumb”), Speed Killers (about wasteful work habits), and Gumming (demonstrating the multitude of ways that telegraph tape can be incorrectly gummed onto the form). The films used rudimentary narratives to promote precision and provide how-to instruction. Accuracy First tells of a $2,200 brokerage loss due to two less-than-perfect operators: “Sally Lee,” who carries her love of a “good time” into inappropriate office chatter, and “Edna Greene,” who assumes too much authority in correcting an error. The “X” message that they scramble is Western Union’s symbol for telegrams ordering stock transactions—in this case a sale of commodities futures. (The difficult-to-read pencil notation on the telegraph ticker indicates “E and space rubbed out,”—omitted, that is, owing to Sally’s interruption.)

This cautionary tale also reveals corporate unease over the changing workforce. For women, employment opportunities were rapidly expanding only on the lower rungs of the white-collar hierarchy: salesclerks, secretaries, typists, and—Western Union’s particular interest—telegraph operators. Female shop clerks in New York department stores faced post­ers reading DO NOT GIGGLE, FLIRT, OR IDLE AWAY YOUR TIME. Accuracy First is a gender morality movie: The men of the stock exchange pay dearly for the woman who takes company time to gossip with Sally and toy gently with her ringleted hair. —Scott Simmon

About the Music
Little studied as a genre, corporate films have also been ignored with respect to their music. Did someone at Western Union hire musicians to play for Accuracy First when it was screened for its employees? The question remains to be answered, but we do know that after the coming of synchronized sound, specialists in such films assembled music and sound effects from prerecorded stock librar­ies. These libraries, like the musical anthologies of the silent period, contained generic pieces by minor composers, organized by setting, mood, type of action, and so forth.

I decided to give Accuracy First such an accompaniment, though my preference was to keep the music light, as a counter to the film’s didactic style. For the film’s central “character” (“Sally Lee”), I chose two early song hits by Irving Berlin: “Nobody Knows” (1919) and “I Love a Piano” (1915). For the main part of the “story,” it seemed appropriate to use “Le Secret (Intermezzo),” by L. Gautier. This salon music keeps the fingers busy (and accurate, one hopes), thus conveying the detached yet apparently contented mood of the film’s female workers at their teletypewriters. For the final segment, when the mood becomes more serious, I shifted to a paraphrase of another once popular salon piece, “Curious Story,” by S. Heller. It tells a simple tale in a manner that is partly playful, partly mock-serious. Both of these pieces were well known to pianists of the silent period. —Martin Marks

About the Preservation
The Smithsonian Institution’s National Museum of American History preserved Accuracy First and the other Western Union titles mentioned above in 1999 through Treasures of American Film Archives funding.