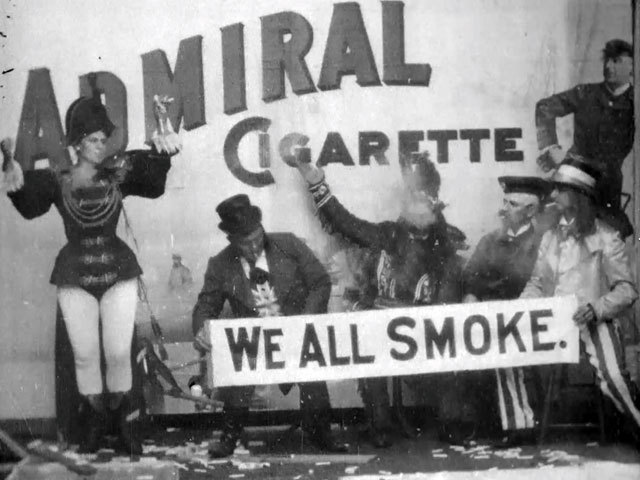 Films made with the support of railroad corporations are arguably the earliest movie ads—or at least the earliest form of “product placement”—and by 1897, New York film companies had begun making ads for such products as Dewar’s Scotch Whiskey, Pabst’s Milwaukee Beer, and local cigar shops. Among the first in these liquor and tobacco promotions is the Edison Manufacturing Company’s Admiral Cigarette. (A few years later, Thomas Edison would be a prominent antismoking campaigner, vowing to “employ no person who smokes cigarettes.”) Lining up to testify with their WE ALL SMOKE banner are various national emblems, including John Bull, Uncle Sam, and an Indian (this last figure long associated with tobacco advertising). The showgirl who leaps from the pack already smoking and who rains cigarettes on the men was also the Admiral Cigarette brand’s sex goddess in magazine ads. Filmed ads were exhibited in free outdoor screenings in 1897 via rooftop projection, which an early trade journal reported were “attracting the attention nightly of thousands of people” and apparently proved disruptive enough that projectionist Edwin S. Porter was detained by police for blocking traffic on Broadway at Thirty-Fourth Street. —Scott Simmon

About the Music
Admiral Cigarette is as quick and inventive as today’s TV ads. Just as the latter are often adorned with memorable, easily recognized music to promote product recognition, I have coupled this film with its own “brand” of famous music—tongue in cheek, of course. For the gathering of iconic male figures, there is a snatch of “My Country ’Tis of Thee.” Then the mood changes abruptly when the female “admiral” pops out of her box, to the opening sailors’ chorus from H.M.S. Pinafore (“We sail the ocean blue, and our saucy ship’s a beauty…”). —Martin Marks

About the Preservation
Admiral Cigarette was preserved by the Library of Congress. It was copied onto 35mm in 1995 from the paper print submitted by the Edison Manufacturing Company for copyright in 1897.