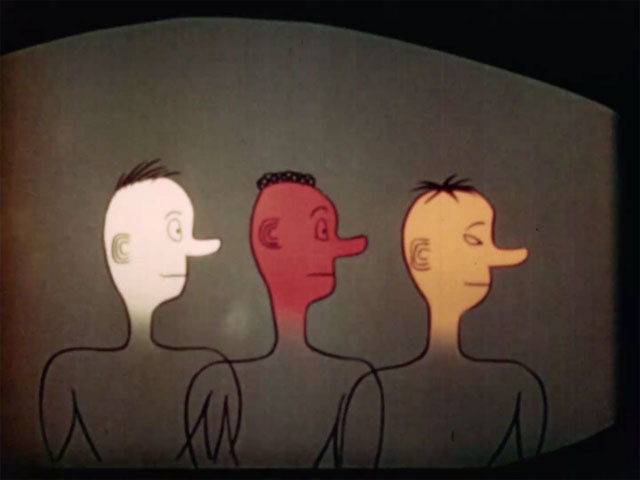 Animated film speaking out for racial tolerance. Using small green demons to caricature racial prejudice, the cartoon argues that the only real difference among the races is skin color and that underneath, all people are the same. Bosley Crowther wrote that the UAW, seeking to widen labor support in the auto industry, sponsored the film “to counteract a critical race-relations problem among the workers in Detroit.”

Note: Based on the pamphlet Races of Mankind by Ruth Benedict and Gene Weltfish, Brotherhood of Man premiered at the Museum of Modern Art. Anticommunists attacked the film because of the involvement of known leftists, such as Ring Lardner Jr., one of the “Hollywood Ten,” and Maurice Rapf, a blacklisted screenwriter who helped organize the Screen Writers Guild. For more on similar labor-sponsored films of the period, see “The UAW-CIO Pioneers Use of Films among Labor Unions,” Business Screen 6, no. 4 (1945): 46; and Elizabeth A. Fones-Wolf, Selling Free Enterprise: The Business Assault on Labor and Liberalism, 1945–60 (Urbana and Chicago, IL: University of Illinois Press, 1994), 125.