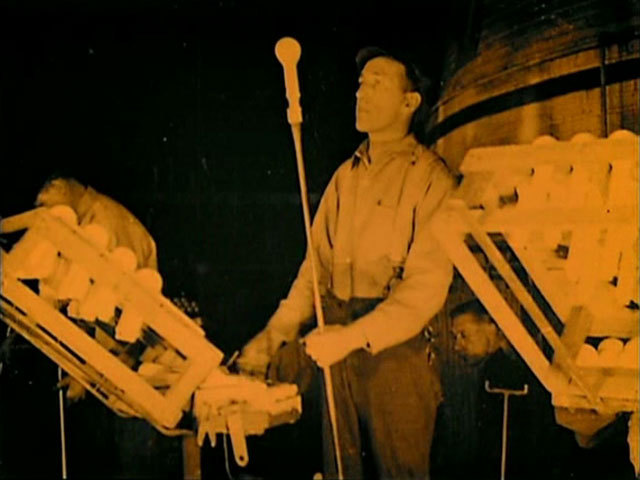 The “educational film” was something to which everyone involved in early film production paid at least lip service, especially because movies were widely criticized for their immorality. Moving Picture World began its weekly column on educational films in 1910 (opening with discussion of a film about diseases spread by houseflies). Such corporations as General Electric, Otis Elevator, and Colgate came to understand exhibitors’ need for respectability as well as for short films to “balance” their programs. Thus the sponsored film, if high-minded and provided at little charge, would win a place in movie houses, particularly in small towns.

De-Light: Making an Electric Light Bulb is a 1920 episode from the Ford Educational Weekly, a series seen in YMCA halls, churches, and a few schools, as well as in movie theaters. Ford Motor Company had entered regular film production in 1914 with an early newsreel series titled the Ford Animated Weekly, and its Educational offshoot, which ran from 1916 to 1921, usually explored for a full reel a single subject, including papermaking and Florida fishing in other 1920 episodes. Probably the most frequent type of early educational film depicted some manufacturing process, as in the 1919 Ford Educational Weekly episode about pottery with the memorable title From Mud to Mug (which survives at the Library of Congress).

A more complex process is detailed with fascinating clarity in De-Light. Practical lightbulbs with carbon or bamboo filaments had been in use for forty years (after the development of efficient vacuum pumps), but the breakthrough for the modern lightbulb had come around 1910 with the invention of drawn filaments made of tungsten—with its high melting point and low evaporation rate—especially as manufactured through the “Coolidge process” seen in the film: Powdered tungsten is pressed into one-inch square bars and gradually stretched at high temperatures into wire filaments. As new and high-tech as this was in 1920, we may be struck now by how much of the lightbulb manufacturing process looks handcrafted and even artisanal. The workers’ gender division is precise, with men mining tungsten and blowing glass bulbs, while women sit at assembly lines, tending to the “spools” and mounting delicate filament coils.

Ford Motor Company’s stake in all this was “soft-sell.” Henry Ford had famously refined the assembly line for the manufacture of reduced-cost Model Ts in 1913. The following year—when 500,000 Model Ts were already on the road— the company began its sponsored newsreels. Without overt claims De-Light nevertheless promotes a vision of American progress through the wonders of the assembly line. The Ford name appears only modestly within the film’s elaborate artwork intertitles, in which Grandma will obtain her reading light thanks to mass production. —Scott Simmon

About the Music
“Educational” films used to put me and my elementary school classmates to sleep, not least because of the monotonous music. I took it as a challenge to keep the score lively, which is why it contains so many pieces, decidedly varied in style. The film tells its story methodically; the assembly line of musical pieces, however, is unpredictable. Classical music lovers might recognize a rather stiff minuet by Beethoven from his first Piano Sonata, a driving prelude and a cheerful fugue by Bach from his Well-Tempered Clavier (vol. 1), some magical Schubert waltzes, or the exotic “March and Procession of Bacchus” from the ballet Sylvia by Délibes. Each of these pieces imparts to their film segments some momentum and high-toned color. As for the other pieces, they are there simply for the fun of it. Especially enjoyable is “The Glow Worm,” which, heard at the beginning and end, could be said to function as the film’s theme song. Once enormously popular, the song was composed by Paul Lincke and originally published in German in 1902; five years later the English version was introduced to American audiences in the Broadway show The Girl Behind the Counter. I like to think it adds to this film’s delight by, as it were, turning tungsten into gold. —Martin Marks

About the Preservation
De-Light was preserved, before the original was lost to deterioration, from a tinted nitrate print in UCLA Film & Television Archive’s Hearst Metrotone News Collection, with funding from the David and Lucile Packard Foundation.