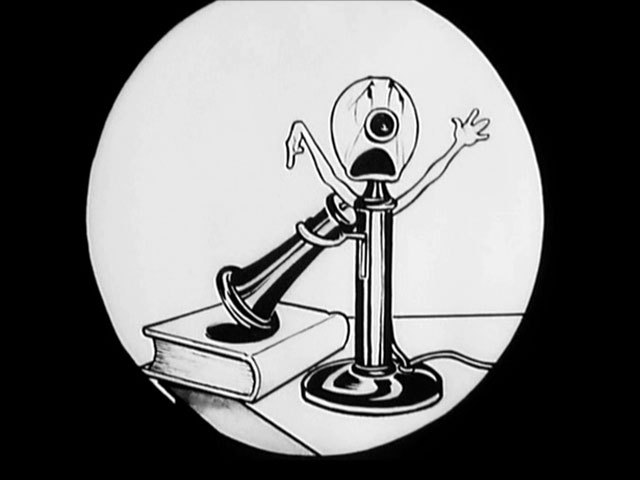 Dave and Max Fleischer’s Now You’re Talking combines animation and live action into the most entertaining sort of sponsored instructional film. Here’s everything you needed to know in the 1920s about the telephone, its etiquette, and its treatment.

Instructional films had long been enlivened by animation. Max Fleischer himself had barely begun as an animator when he enlisted in World War I and was assigned to direct such animated training films for the army as How to Read a Map (1917). In the 1920s, he and his brother Dave flourished with their inventive Out of the Inkwell cartoons until the financial collapse of their company, Red Seal, in late 1926. During the year before they joined up with Paramount Pictures, the brothers evidently had time for some unusual one-shot projects, including this little instructional comedy, which has gone vir­tually unseen for seventy-five years. It was distributed by the YMCA to nontheatrical venues and apparently funded by American Telephone and Telegraph, the government-sanctioned monopoly, whose bell logo appears in the film discreetly. (AT&T’s sponsorship of educational films with inventive animation extended through Frank Capra’s memorable Our Mr. Sun of 1956 and Hemo the Magnificent of 1957.)

The Fleischer brothers had experience in popularizing the workings of technology. Red Seal distributed science documentaries, and Max had been art editor of Popular Science Monthly before World War I. In 1923, he produced for distribution to schools the four-reel Einstein’s Theory of Relativity, whose simplifications pained his consulting astronomer, but it brought an admiring note from Einstein himself. The focus of Now You’re Talking, also known as Tale of the Upright Telephone, is on a more everyday piece of technology, the desk telephone, which then consisted of a receiver earpiece and a transmitter attached to a desk stand, with most of the electronics and the ringer mounted separately on the wall. Dial telephones had been introduced at the start of the 1920s, but most users, including those depicted here, still relied on operators to place calls.

The short film is elaborately structured as a double frame tale. As with the Out of the Inkwell films, it begins with what the Fleischers called “the actual”: a live-action opening of an anxious and apparently sleep-deprived man who absentmindedly abuses his phone and neglects to speak directly into its transmitter cone. In the man’s animated dream, an ambulance rushes “William Telephone” to a hospital, where the telephone’s diary narrates the abuses he’s suffered, including twisted cords, rainwater on his electronics, and an oddball set of dangerous attachments. The film warns too against the social rudeness of failing to answer a phone and the embarrassment of numerical dyslexia (even in this era of shorter phone numbers, which ran from three to seven digits, depending on the size of the city; AT&T standardized local numbers at seven digits in 1945). The happy resolution of the animated story suits its subject. A bearded doctor determines that nothing is physically wrong with Mr. Telephone. He’s merely “upset” and then cures himself by talking. Freud and the telephone company would equally approve. —Scott Simmon

About the Music
My principal goal here was to play up the film’s comedy by using a mixture of traditional and more modern devices. On the traditional side stand some humorous pieces of the period —most notably The Chevy Chase Fox Trot (1914) by a very young J. Herbert “Eubie” Blake. Material from this original piece runs through most of the animated section of the film. On the modern side, I improvised musical jokes, including quick burlesques of Chopin’s Funeral March, Beethoven’s Fifth, and “Jingle Bells,” as well as my own “ringing” motif. The latter is part sound effect and part musical idea. It is probably not the sort of music people would have played at the time—but then, what would have been played? In nontheatrical venues, accompaniments, if played at all, were unremarkable. Moreover, although ragtime piano commonly accompanied earlier films, by the late twenties, audiences eager for the latest up-tempo fox-trot, Charleston, or Gershwin song might have found the Eubie Blake number out of date (no matter how much we appreciate its artistry today). Only at the end of the film do I play a song that they—and I hope we—would immediately get: This is “Smiles,” by J. Will Callahan and Lee S. Roberts (published in 1917). Watching the film’s protagonist change his attitude and his phone etiquette, then seeing him rewarded with good news over the phone, to which he reacts by smiling broadly, it is time for a song about people communicating face-to-face: “There are smiles,” runs the final part of the chorus, “that have a tender meaning / That the eyes of love alone may see / And the smiles that fill my life with sunshine / Are the smiles that you give to me.” Now you’re singing! —Martin Marks

About the Preservation
Now You’re Talking was restored in 1998 by the Library of Congress from two 1920s prints on diacetate, a nonflammable base for films such as this that were shown mainly in non­theatrical settings.