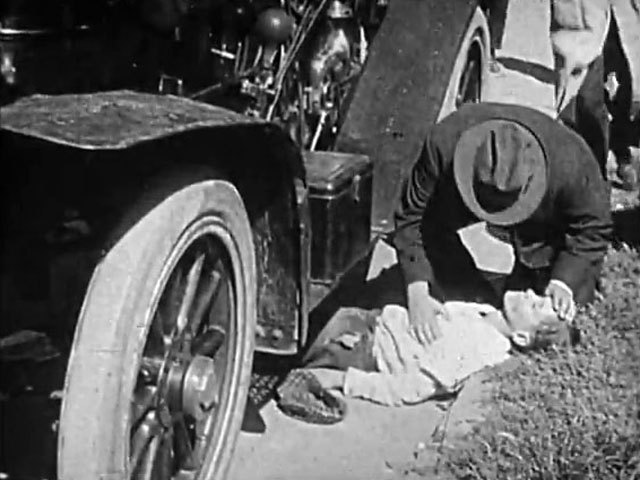 For information about accessing this film, please contact the George Eastman Museum.

The Cost of Carelessness is a precursor to those infamous traffic-safety films—Last Date (1950), Red Asphalt (1964), Highways of Agony (1969), and their ilk—that traumatized generations of American public school students. This remarkably early example of the school-screened form was professionally filmed in 1913 by the new Universal Film Manufacturing Company and sponsored by the Brooklyn Rapid Transit Company as part of a campaign to reduce accidents involving their electric trolley cars.

As urban densities increased (Brooklyn had more than doubled in population since 1890 to about 1.7 million residents), the sense also grew that city life was fraught with perils—especially for children and for women newly out on their own. Such fears were not without reason. In 1913, there were on average 30 accidents each day in Brooklyn in which a trolley car “and a pedestrian or a vehicle come in violent contact.” The transit company tried to argue that from a larger perspective this wasn’t all that bad. About 750 million rides were taken in a year on Brooklyn’s trolleys, which made 30,000 trips each day, and that worked out to just one accident per 1,000 trips. Still, 30 accidents per day made for shocking headlines, and the company responded with a “Safety Crusade,” which involved enrolling girls in “Careful Clubs,” recruiting boys for “Safety Patrols,” and bringing lecturers—and films—to schools.

Unseen for 90 years, The Cost of Carelessness must be the earliest film to depict a film being shown in a classroom—through a double-exposure special effect. Several additional short films (all presumed lost) were made for this Brook­lyn campaign, and the students are portrayed as viewing one of these. In that film-within-a-film, a boy roller-skating in the streets is struck down by an auto. He survives but (in subsequent shots unseen here) must watch from his wheelchair, “suffering stamped upon his features,” as girls dance around a maypole and other boys play ball in the safety of a park. The innovative safety campaign merited a Sunday New York Times article on January 25, 1914 (“‘Movies’ of Street Car Accidents Shown in Brooklyn Schools”), that justified the films’ narratives of injury and death: “While there is an element of horror in the scenes as shown, the effect on the children was manifestly for their own good. On their fresh minds the realism of the scenarios bit in a strong and terrible lesson.”

As with later films in the safety genre, what engages viewers is not the awkward slogans (“ONE THINK BEFORE AN ACCIDENT IS WORTH A MILLION THINKS AFTERWARDS”) but the lively reenactments reminding us of the deadly dangers of everyday carelessness. Through stunts that still look dangerous, we get live-action versions of the warnings introduced on the lecturer’s classroom sketches (“SHE CLEARED THE CAR BUT HOW ABOUT THE AUTO?” and “THE RIGHT WAY TO GET OFF”). The filmmakers demonstrate the effectiveness of the trolley’s safety wheel guard by simply having the trolley run over a boy! (Watch it in slow motion.) Hauled up by the uniformed driver, the boy gamely enacts the extra humiliation of being written up for his violation of safety. Throughout the staged documentary, there’s an endearing freedom in the “performances,” with the children half acting, half playing, staring at the camera, and full of the giggly vitality that does appear accident prone—and worth all efforts to cherish.

The Brooklyn Institution for Safety collected data the following year, 1914, on traffic accidents serious enough to require children to be taken to three major hospitals by ambulance. In those incidents, 16 children had been run over by electric trolleys and 82 had been injured by automobiles, but the largest number, 105, had been injured by a type of conveyance glimpsed only in the background of the film: horse-drawn vehicles. The Cost of Carelessness looks ahead to the motorized age even before greater New York City had a single traffic light. —Scott Simmon

About the Music
Scott Simmon mentions the “freedom in the performances” in this film. I cannot think of a more apt phrase to describe this musical score by the Aardett Sextet. The six musicians—Peter Bloom (flute), John Funkhouser (bass), Mark Harvey (trumpet), Tim Ray (piano), Phil Scarff (saxophone), and Harry Wellott (percussion)—have so mastered the art of collective improvisation that within an hour of looking at the film they came up with a polished product. (Mark and I had viewed the short several days before and had a preliminary musical “lesson plan” for this classroom traffic-safety film. All the same, the plan was extremely sketchy, and the performance was improvised on the spot.) If the music sounds like a pre-composed score, that is because, as Mark has written, “in the jazz tradition collective improvisation is composition: literally a putting-together of musical elements in real time. It was the bedrock of New Orleans style in the 1920s and an approach rediscovered by the free jazz movement of the 1950s and ’60s.”

That this jazz score brings a lighthearted spirit to this surprising film—which is alternately slow paced and abrupt, methodical and disconnected—may be due to the inherent disrespect for authority that is part of the jazz ethos and the tendency of jazz musicians to make life “swing.” After all, why not? Though not of the period, the music certainly sweetens the film’s rhetoric.

Its humor notwithstanding, the Aardett’s score is responsive to the film’s episodic structure. Consider, for example, the music’s solemn beginning, with its descending melodic fragments and wind chimes: This is a free march derived from Edward Elgar’s famous Pomp and Circumstance, which suits the film’s opening “academic” scenes. Gradually the music begins to warm up, and by the time the film reaches the lively episode showing how “dangerous [it is] to play in the street,” the ensemble has moved to an easy swing version of the popular waltz song “Take Me Out to the Ball Game,” a clever way to convey the boys’ blithe ignorance of peril. The moving automobiles seen in the final third of the film are matched to a quicker fox trot. Then, as the reckless chauffeur races down the road, the music goes bebop wild, coming to a noisy climax when the streetcar and the auto collide. Things calm down for the scenes showing the mortal price of reckless behavior, and the concluding inspirational quote is neatly accom­panied with tranquil recollection of the score’s opening. Returning to its point of departure, the music proves that for all its jazzy freedom, it has come full circle without the slightest bit of carelessness. —Martin Marks

About the Preservation
The Cost of Carelessness survived as a 28mm print and was restored in 35mm by George Eastman Museum through a Save America’s Treasures grant administered by the National Endowment for the Humanities and the National Park Service. Printed on nonflammable diacetate plastic, 28mm helped popularize movie viewing in schools and other venues that did not have the fireproof projection booths needed for nitrate film—hence the film’s end title: “ENCLOSING BOOTH NOT REQUIRED.”

Further Reading and Viewing
Ben Singer’s Melodrama and Modernity: Early Sensational Cinema and Its Contexts (Columbia University Press, 2001) explores the relationship of the threats and thrills of the modern city with stage plays and film.

Several post–World War II traffic-safety films, including Last Date, are in the Prelinger Archives and viewable online at the Internet Archive.