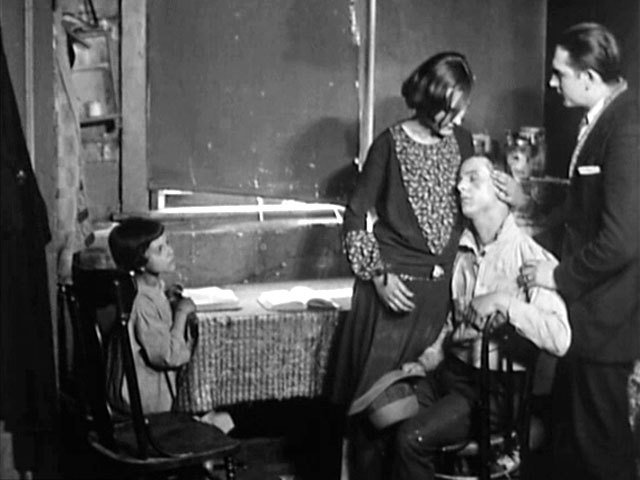 In January 1926, some sixteen thousand low-paid, mainly immigrant workers in the wool mills of Passaic and nearby New Jersey cities went out on strike. It proved to be one of the longest, most bitter, and most widely publicized strikes in U.S. labor history. Remarkably, the strikers themselves organized a feature-length film about the strike while it was still ongoing. Although two of the seven reels of The Passaic Textile Strike remain lost, the self-contained “Prologue” survives essentially complete and is seen here. Production costs seem to have been covered almost entirely by the American Communist Party, and involvement of Communists in leading the strike—in instigating it, the mill owners contended—was one of the many contentious issues. Indeed, because the strike was not fully settled for more than a year, much of the battle became a media war for public sympathy, fought through newspapers, pamphlets, and newsreels. Were the villains Red agitators or fat-cat capitalists? This engaged movie served simultaneously as a propaganda tool, a source of pride for the strikers (ten thousand of whom packed the open-air premiere in September 1926), and a method of raising relief funds through a national screening tour.

According to figures provided by the Passaic mill owners, their workers earned on average about twenty-one dollars per week before the strike. Discontent had grown after a 10 percent wage cut in November 1925, and the strike itself was precipitated by the firing of a handful of workers caught organizing a union. Gustav Deak, who took over leadership of the strike midway, plays a featured role in the Prologue as the friend who comes to the aid of “Stefan” when he collapses from overwork and brings him home to his family. The next day Deak is seen telling a group of workers, “They are making slaves of us. Let’s organize a union.” He had entered the textile mills at fourteen (like the family’s daughter in the Prologue) and testified about working conditions before a U.S. Senate investigative committee in May 1926: “I started at ten cents an hour. I worked for seven years and I got fifty-five cents an hour before the wage cut.” He labored in the wool drying rooms at “one hundred and ten degrees, without change, right straight through.”

Such raw facts needed an emotionally engaging lead-in, and the Prologue fulfills that function through what we’d now call a docudrama. It’s a fictional story intended to convey representative truths and acted almost entirely by the strikers themselves (although individual acting credits do not survive). “One of the most important features of the Passaic strike is its educational aspect,” argued the Communist Daily Worker, which in its report on the premiere admitted that the film contained some “hokum”—if “bigger and better hokum” than usual. At least one experienced filmmaker was hired from Boston, and the result is a professional-looking and unabashed rich-versus-poor melodrama, which nevertheless reflected social truths. The city of Passaic was divided by railroad tracks, with its comfortable suburban community to the west and more than half of its 1926 population of seventy thousand crowded into a sixth of the city’s area to the east, where 90 percent of the residents were foreign born and where the film’s tenement interiors were shot. The Prologue tells its story through a family of Polish immigrants—a husband and wife given the names Stefan and Kada Breznac, and their children—but it might equally have opted for another of the many nationalities, mainly eastern European, among the workers. The first meeting to pro­test wage cuts included speeches in Hungarian, Italian, Russian, and Serbo-Croatian, as well as Polish—an ethnic mix that was a challenge to the strike’s united front.

Even the lechery and statutory rape from the Prologue’s “big boss” represents a truth through melodrama. Mill wages for men alone were insufficient to support a family. Women and child workers outnumbered men in Passaic and were hired primarily for night shifts, when sexual harassment and other hazards increased. Women typically earned about forty-two cents per hour, as against fifty-five cents for men, and as again dramatized in the film, hours were highly variable—cut back during slack seasons and extended with mandatory overtime during rush periods. In the Prologue’s tale, Stefan dies from overwork and perhaps from one of the diseases common to workers exposed to textile dust and chemical dyes. The Prologue ends with nothing of the happy resolution of the more mainstream Children Who Labor, whose exteriors were shot a few miles north, outside the silk mills of Paterson, New Jersey.

What survives of the rest of The Passaic Textile Strike consists of documentary sequences of union meetings, picket lines, rallies, and speeches—requiring long intertitle texts—as well as several remarkable shots of brutal police tactics, taken by cameras hidden on rooftops. (The Passaic police made the public relations mistake of clubbing cameramen from the Fox and Pathé newsreels, smashing several thousand dollars’ worth of cameras. The newsmen returned in bulletproof cars with signs reading NEWS PHOTOGRAPHERS GETTING PICTURES AT THE PASSAIC FRONT.)

The strike’s resolution—gradually reached several months after the film’s release—was not a clear-cut victory for either side, and much depended on where one worked. The Botany Consolidated Mills, where the strike began, agreed to rescind the wage cut and granted union recognition (“providing it is not of communistic origin or purpose”), but other mills simply refused to rehire, partly because demand for woven woolens had been reduced by fashion shifts to fine knits, furs, and silk.

For all their sacrifices during the yearlong struggle, most workers were no better off than before, and many were left jobless. To the extent, however, that the Passaic textile strike was a media war, the workers look to have come out on top. Through this film, they get the last word. —Scott Simmon

About the Music
This Prologue begins with propagandistic intertitles and documentary shots as an introduction to the fictional story that follows. Seeing this sequence, I had only one thought: The first number must be “The Internationale.” This song is bound up with the international labor movement during the late nineteenth century. (Eugène Pottier, a Parisian Communard, drafted the poem in 1871, and Pierre Degeyter, a factory worker and composer from Lille, set it to music in 1888. As it happens, Lille, like Passaic, was a town dependent on the textile industry.) By the early 1900s, this march was being fervently sung at international workers congresses. Thus, well before it became the official anthem of the USSR, its inspirational power had become clear. However, my rendition is left unfinished, because in this film the outcome of the strike is uncertain. In the remainder of the Prologue, only one ghostly wisp of the tune can be heard—at the moment when Gustav Deak calls for the mill workers to organize a union.

In the surviving portions of the rest of The Passaic Textile Strike there are several more uplifting segments, where it would have been just as appropriate to play—and perhaps even to have choristers sing—“The Internationale.” But by itself the Prologue descends, after the briefest of hopeful beginnings, into stark naturalistic tragedy—and thus the rest of my score contains simple piano pieces designed to add to the story’s pathos and power. Two of these pieces are beloved “Impromptus” (from the op. 90 set) by Franz Schubert, one of the greatest masters of lyric pathos. At the start comes his “Impromptu no. 1,” a dark and halting march, which immediately undercuts the optimism of the preceding “Internationale.” The score culminates with part of Schubert’s second “Impromptu”—a ferocious dance (of death?), meant here to convey the terrifying power of the factory machines and the industrial system that drives them. One other notable piece that permeates the score is a “Mazurka” (op. 40, no. 2) by Erik Meyer-Helmund (1861–1932). The mazurka was by origin a Polish peasant dance in moderate triple time, but it was elevated to the most artful realm of piano music by Chopin. Meyer-Helmund’s mazurka is not at Chopin’s level, but it blends easily with the other pieces of the score. I use it for most of the scenes of the Polish immigrant family. Its character of poignant nostalgia accords well with this tale of people rendered helpless in our land of opportunity. —Martin Marks

About the Preservation
The single known, incomplete print of The Passaic Textile Strike was rediscovered by pioneer distributor Thomas Brandon (founder of Brandon Films in 1940) in his project to recover lost films about American labor. He donated this and a number of other rare left-wing independent films in 1974 through the American Film Institute to the Library of Congress and the Museum of Modern Art.

Further Reading
Kevin Brownlow ends his wide-ranging, beautifully illustrated sur­vey of silent social-conscience films, Behind the Mask of Innocence (Knopf, 1990), with a discussion of The Passaic Textile Strike.