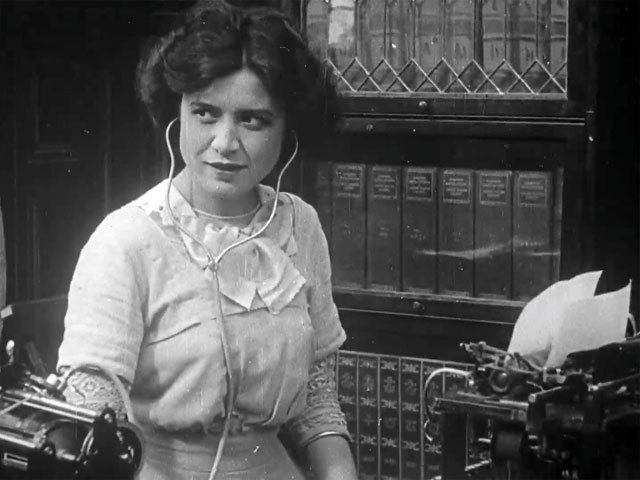 The Stenographer’s Friend; or, What Was Accomplished by an Edison Business Phonograph (1910)
Sponsor/Production Co.: Edison Mfg. Co. Cast: John Cumpson. Transfer Note: Copied at 18 frames per second from a 35mm print preserved by the Library of Congress (Edison Collection). Running Time: 8 minutes.

The Stenographer’s Friend; or, What Was Accomplished by an Edison Business Phonograph successfully incorporates product demonstration into a light comic fable about how productivity and office politics improve with the introduction of the Edison company’s wax-cylinder dictating machine. When he invented the phonograph in the 1870s, Edison and others assumed that the machine’s ultimate value would be for business. By the 1890s, it was praised as “a stenographer which will take with unfailing accuracy from the most rapid dictation, which never goes out to ‘see a man,’ which is ready for work at any hour of the day,…which is never dissatisfied, sick or ‘looking for a raise.’” One problem the machine faced (beyond complaints of its complexity and proclivity to breaking down) was the flip side to this praise. The opening topic for discussion at the first National Phonograph Association Convention in 1890 was how to overcome opposition to the phonograph from stenographers who feared unemployment, the same sort of opposition that had greeted the introduction of the typewriter. By the time of The Stenographer’s Friend in 1910, Edison’s business phonograph had at long last become a successful product, and the film answers such fears through a little before-and-after drama. Our female stenographer breaks into tears at her long hours until the arrival of her “friend” the phonograph and the miraculous time-saving improvements brought by the ease of transcribing dictation through it. Now with “everybody happy,” the entire office staff bows down to Edison’s jaunty, straw-hatted salesman. —Scott Simmon

About the Music
The score is designed in the usual way for comedies: as a succession of good-humored and tuneful pieces, a scene at a time. At one end comes ballet music from Offenbach’s Bluebeard (1866), to set up the bustle of the office; at the other is Joplin’s Paragon Rag (1909), to celebrate the newfound harmony. None of the music postdates the film, and in theory nothing would have prevented a pianist in 1910 from playing some of it. But one wonders how he or she might have responded to the insert of the “Edison Commercial System” brochure, especially when a hand flips it over to reveal Thomas Edison’s portrait. My solution was to segue from the previous selection, Gilbert and Sullivan’s satirical song “A Magnet Hung in a Hardware Shop” (from Patience, 1881) to George M. Cohan’s enormous hit, “The Yankee Doodle Boy” (from Little Johnny Jones, 1904). This pairing seems doubly appropriate, for not only do biographies of Edison tell us that he loved Gilbert and Sullivan (and disliked “serious” music), but he and Cohan were two of the most famous Americans of their day—and alike in being objects of fervent national pride. —Martin Marks