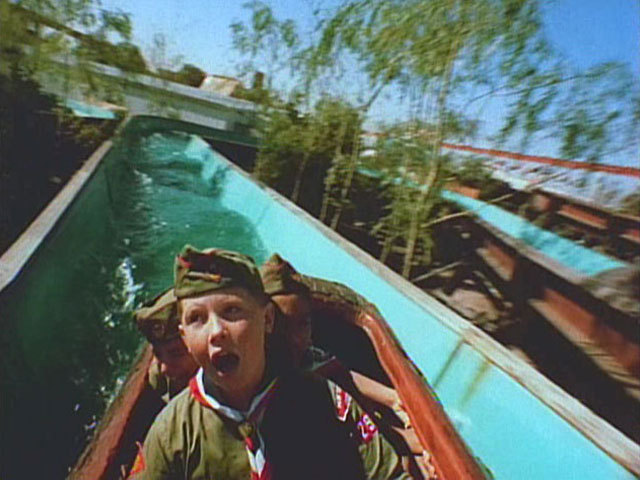 For information about accessing this film, please contact The New York Public Library.

Like all world’s fairs, the New York World’s Fair of 1964–65 was conceived as a one-time celebration and designed to leave few traces behind. Orchestrated by urban planner Robert Moses, the billion-dollar extravaganza was dedicated to the promotion of “peace through understanding” and “man’s achievements in an expanding universe.” When the fair opened to fewer visitors than expected, Alexander Hammid and Francis Thompson were commissioned to produce a promotional film to boost attendance. While memories of the exposition may have faded, the fair lives on in To the Fair! and 307 other films made for the event.

Alexander Hammid (1907–2004), a pioneering figure in the Czech avant-garde, made documentaries before fleeing to America in 1939 to escape the Nazi invasion. Here he collaborated with Maya Deren on Meshes of the Afternoon (1942), probably the most celebrated experimental film of that decade. Returning to sponsored filmmaking, he produced films for the United Nations and the United States government’s Office of War Information, including the Academy Award–nominated documentary Library of Congress (1945). Beginning in 1962, he joined forces with painter/filmmaker Francis Thompson (1908–2003) to produce a series of World’s Fair films: To Be Alive! (1964, for S.C. Johnson & Son’s Wax Pavilion); We Are Young (1967, for Expo 67 in Montreal); and US (1968, for the HemisFair in San Antonio). The Academy Award–winning To Be Alive! was shown on three screens. In 1976, To Fly!, one of the earliest releases in the IMAX format, was made to celebrate the opening of the Smithsonian Institution’s National Air and Space Museum. “Our films just got bigger and bigger and bigger until they were IMAX,” commented Thompson.

To the Fair! shows why Hammid and Thompson’s work was in such demand. The Technicolor short opens with eager fair goers whizzing toward New York in practically every vehicle known to man, including a ten-seat bike, a helicopter, a hydrofoil, and an amphibious car. Crosscutting among groups of visitors, the film gives a fast paced tour of the fairgrounds, including tantalizing glimpses of Futurama, General Motors’ update of its 1939 World’s Fair Exhibition; Disney’s first version of It’s a Small World; and the Indonesia Pavilion, which was later closed due to foreign policy concerns. After such an exciting send-off, what viewer would not want to race off and join these ebullient visitors?

About the Preservation
After the fair’s closing, the World’s Fair Corporation donated its records to the Manuscripts and Archives Division of The New York Public Library. To the Fair! was among the documents. With an NFPF grant, the library pieced together footage from the answer prints and the negative to produce a new preservation master and prints with an optical soundtrack.

More Information
To the Fair! and other collaborations of Hammid and Thompson are described in the NFPF’s The Field Guide to Sponsored Films (2006) by Rick Prelinger.