Please answer both questions below to proceed to the video. Thank you.
Three films from 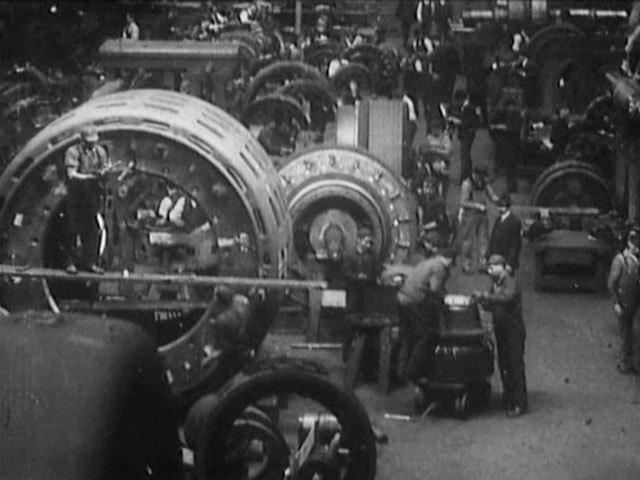 These three single-shot industrial films were photographed at the East Pittsburgh, Pennsylvania, plant of the Westinghouse Electric and Manufacturing Company just over a century ago, in April and May 1904. The full Westinghouse Works series ran to at least twenty-nine films and documented several plants in the conglomerate controlled by inventor and industrialist George Westinghouse (1846–1914). Made originally to promote the corporation’s size and modernity, the films survive now as a remarkable record of an early industrial workplace. Especially in the vertiginous first crane shot, it’s hard to say if the moviemaking or the manufacturing is more breathtaking.

Industrial films were, of course, only possible with the permission and usually the sponsorship of corporations. The Selig Polyscope Company of Chicago may have set the pattern with its (now lost) Stock Yard Series (1901) on the city’s Armour & Company meatpacking plant, some sixty films with such titles as Driving Hogs to Slaughter and Koshering Cattle. After the outcry following the 1906 publication of The Jungle, Upton Sinclair’s vivid muckraking novel about the meatpacking industry, Philip Armour paid for the films’ rerelease.

Although Westinghouse had less urgent need to burnish its image, it had just broken a 1903 strike at this East Pittsburgh factory by refusing to negotiate with the machinists union and hiring replacement scabs. It found in American Mutoscope and Biograph a company with experience in industrial films, including about thirty taken in 1903 for the National Cash Register Company. The Westinghouse series, photographed by Billy Bitzer, was produced with an initial venue in mind: the Westing­house Auditorium at the 1904 St. Louis World’s Fair (celebrating the centennial of the Louisiana Purchase), where the films were shown daily, after a debut in Pittsburgh’s Carnegie Hall on May 11, 1904. The films went on to international sales and, according to a Biograph executive in 1906, proved most popular in Japan.

The Westinghouse plant in East Pittsburgh, built in 1895 and covering some two million square feet, was claimed to be the largest manufacturing facility in the world. The spectacular first film, Panoramic View, Aisle B, suggests as much. It was evidently photographed from one of the cranes that tracked below the roof of the main building, just short of a quarter mile long, where workmen constructed electrical generators and rotary current converters. Recent clients for these huge machines had included the St. Louis World’s Fair (where electric power for the fair was itself an exhibition) and the New York subway system, which would open in October 1904.

The gender division among the era’s manufacturing work­ers is especially pronounced in the second film, Girls Winding Armatures. The seated workers pound copper wires around the iron cores of electric motors, while supervisors apparently test junction connections via the lightbulb indicators along the aisle. The well-illuminated first rows of women and the silhouette of the boy who pushes a motor into the foreground reveal that this interior scene is photographed with artificial lighting—probably the first use of mercury vapor tube lamps from Cooper-Hewitt Electric, another Westinghouse company. The lamps’ bluish green tinge proved ideal for early motion picture stock—which was insensitive to the red portion of the spectrum—and they were successfully installed in Biograph’s new Manhattan studio over the same months.

Westinghouse’s factory in East Pittsburgh had grown to some nine thousand employees by 1904. Back in 1895, one of the most famous of the first projected films had been the Lumière brothers’ Workers Leaving the Factory, shot outside their family’s photographic plant in Lyons, France. For the third Westinghouse Works film here—untitled because uncopyrighted —it looks as if someone decided that America could do it better and bigger. —Scott Simmon

About the Music
A review of the premiere of these films at Carnegie Hall in Pittsburgh notes that “Walter E. Hall rendered some pleasing organ selections during the evening”—implying that Hall provided the films with music. (He might, however, have played around them, with a lecturer providing spoken “accompaniment” during the screenings—as was not infrequently the case for early noncommercial programs, especially when shown in unusual venues.) Whether or not industrial films were normally screened with music in 1904, today these three virtually demand an accompaniment, because of their rhythmic qualities. Though nonnarrative, each film has a particular tempo whose flow is unbroken. Seen one after the other, the three resemble the movements of a coherent, albeit abstract, classical sonata. The first movement—defined literally by the steady motion of the traveling crane shot—impresses by its solemn grandeur; the second, with its shift to a static “feminine” composition, has the quality of a lyrical slow movement; and the third has the speed and wit of a quick-paced finale, with a broad ritard, or slowdown, at the end.

Nevertheless, I decided not to attempt to use a single sonata (or baroque suite) as accompaniment, because such classical works are really too dramatic and complex for these films. Instead I used three pieces of the period to evoke a sonata style, with simple links played during the breaks between films. The first film is matched to a quiet, proto-minimalist “fantasia” on portions of The Gladiator (1886), an early John Philip Sousa march. Next comes a straightforward performance of a lighter piece, The Mill, by Adolf Jensen (1837–79), which appeared originally in his popular Wanderbilder, op. 17, no. 3 (Scenes of travel), reprinted dozens of times at the turn of the century. For the finale comes “real” movie music: a galop from the second volume of J.S. Zamecnik’s seminal series, Sam Fox Moving Picture Music (1913). Zamecnik places it as the final piece of five under the heading “Weekly—Pathé, Gaumont, etc.,” with the pieces labeled “European Army Maneuvers,” “Funeral March,” “Paris Fashions,” “Aero­plane or Regatta Races,” and “Marathon, Horse, or Automobile Races.” The composer thus provided a model for constructing an up-to-date musical medley for a wide range of newsreels. For the third Westinghouse film the happy-go-lucky galop works well. No one wins this “marathon” of a “race” to leave the factory, but all the workers seem more than eager to try! —Martin Marks

About the Preservation
The Library of Congress’s American Memory Web site includes extensive information about the Westinghouse companies as well as the paper print copyright versions of a further nineteen titles in the Westinghouse Works series, available for downloading or streaming: memory.loc.gov/ammem/papr/west/westhome.html.