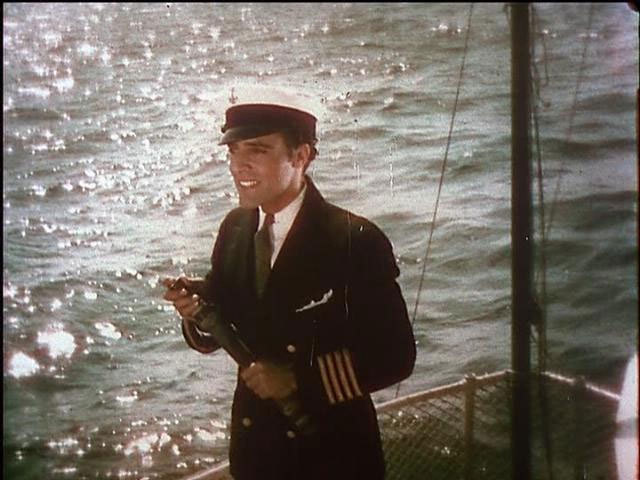 Promoted as “a prismatic novelty,” The Love Charm’s one-reel drama showcased a refinement in the two-color Technicolor process, with Southern California standing in for the South Pacific. Sun‑dappled seas, swaying palms, dancing native girls, a brightly plumed parrot—such visual punctuation was more of a draw than the unknown cast or the rudimentary story. Still, looking back at the film, its production team turns out to have interest too.

Most silent films were seen originally with some sort of color. A few were painstakingly hand colored or stenciled (as with Virginian Types, also on the Treasures New Zealand DVD). Much more common were uniform-color tints (created with dyes) and tones (created through chemical reaction with the silver emulsion), found in most theatrical releases. If silent films screened today are usually only in black-and-white, that’s primarily because tints and tones were lost when the original prints were copied. (In the New Zealand preservation project, the colors were retained, on both the exhibition prints and the DVD.)

Experiments were also made to capture natural colors during filming, and the most commercially successful ones were from the Technicolor Corporation. To capture the full color spectrum on black-and-white film, three records—documenting red, green, and blue—are needed, but most processes in the silent era had trouble enough incorporating two records, usually the green and red. An intertitle in The Love Charm about the “sapphire sea” adds to the fantasy, as blue is the most evidently missing part of the palette. Released in November 1928, the film was made with the improved two-color process introduced by Technicolor earlier that year. As with the company’s previous two-color processes, starting back in 1916, the camera captured light through a beam-splitting prism and two filters onto a black-and-white negative of double the normal length, with alternate frames for the green and red records. The 1928 innovation was with the release print. After commercially unsuccessful experiments with double-length prints, which required a special projector, Technicolor had moved in 1922 to issuing standard-length “sandwiched” prints, with the green and red records cemented back to back. Theater owners, however, complained about those thick prints buckling and slipping out of focus. The prints for The Love Charm (as with The Viking, the first feature in this process and released the same month) were created through dye-transfer printing onto a single film strip.

The Love Charm’s director, Howard Mitchell, spent most of his career as an actor, onstage from early in the century and as a bit player in some 300 films into the 1950s. The film was produced by the short-lived Colorart Pictures, founded in 1926 by two former Technicolor employees, Howard C. Brown and Curtis F. Nagel, who released a series of one- and two‑reel color shorts through Tiffany Stahl, a low-budget studio then overseen by John Stahl (best remembered as a director of great melodramas in the 1930s and ’40s). Colorart’s collapse in 1929 was hastened by its attempt to finance a genuine South Seas drama: the F.W. Murnau–Robert Flaherty feature eventually released in black-and-white as Tabu (1931).

For The Love Charm Colorart rented Technicolor cameras and its best cameraman too: Ray Rennahan, the Technicolor employee from 1921 through 1943 who after mastering two‑color became in the 1930s the cinematographer to first prove the artistic possibilities of Technicolor’s three-strip camera (so labeled because it recorded the three color records on three separate 35mm black-and-white negatives). He shot the first released short (La Cucaracha, 1934) and feature (Becky Sharp, 1935) in that three-color process and won Academy Awards for his Technicolor cinematography on Gone with the Wind (1939) and Blood and Sand (1941).

Among the actors in The Love Charm, only one might have been recognizable to audiences. Ann Christy, age 19, had starred earlier in 1928 opposite Harold Lloyd in Speedy and here plays “the daughter of a white trader,” Nita, who has evidently grown up native. The lead role of the “bored” yachting captain, who comes to life only after he spots the grass-skirted girls on a nearby island, could have been crafted for the restlessly flamboyant figure identified onscreen under the evident pseudonym Lucio E. Flama (Light and Flame). He is Niccolò Quattrociocchi (1896–1967), who would be the flashy co-owner of Manhattan’s El Borracho nightclub from 1943 through the late 1950s and pen the witty Love and Dishes (Bobbs-Merrill, 1950), an autobiography—with recipes—in which he always has an eye for beautiful girls and tallies his collection of 14,823 signed lipstick prints from visiting female celebrities and friends. Born in Palermo to a noble Sicilian family, he learned seafaring at the city’s Nautical Institute. After World War I service, he moved to Rome, where the poet-politician Gabriele D’Annunzio came up with his stage name Lucio Flamma, under which he appeared in Italian and French films through the mid‑1920s. “Under good direction I soon became a remarkably mediocre actor,” as he put it. Monte Carlo winnings financed his move to Los Angeles, where “on the lucky advice of one of 187 numerologists operating there, I shortened Flamma to Flama, so that nothing could go wrong with my Hollywood career.” He had only minor parts in such films as De Mille’s King of Kings (1927) and the two-reel The Czarina’s Secret (1928), both of which brought him under Technicolor cameras, before the coming of sound ended his film career. The Love Charm seems to be both his only lead and his last role. But he kept up his movie-star socializing, and his financial partner for El Borracho was the silent comic Monty Banks, born in Italy as Mario Bianchi (and whose Brilliantino the Bullfighter [1922], also recovered in New Zealand, can be viewed on the NFPF website). Niccolò Quattrociocchi returned in the 1960s to Palermo, where he was knighted by the Order of Malta and endowed a children’s hospital named for his sister. (For filling out his career, our thanks to his great-grandniece Alice Simonetti-Morrison.)

The background of The Love Charm’s writer, Duncan Renaldo, remains more mysterious. He is best remembered as “the Cisco Kid” through eight films in the late 1940s and more than 150 television episodes in the 1950s. His birthplace was variously reported as Spain or Romania, his upbringing in France or Brazil, and he claimed to have been stranded in the United States as a merchant seaman when his ship caught fire in Baltimore harbor in 1921. By the year of The Love Charm he was getting bit parts, including at Tiffany Stahl, and selling story ideas to Colorart. The gap in his filmography comes between 1934 and 1936, after he was convicted of perjury for claiming U.S. citizenship—evidence being a routine MGM form he signed before African location shooting on Trader Horn (1931)—and jailed for almost two years. While immigration authorities tried to determine where to deport him, President Roosevelt stepped in with a pardon. He was finally awarded U.S. citizenship in 1941.

Renaldo set his fanciful story for The Love Charm on some unnamed island, lost in time and space, where male tourists are apparently a rare sight. Or perhaps “Lucio E. Flama” is just more dashingly debonair than any previous one. After Nita falls from a tree into the arms of our captain, their eyes lock in love-at-first-sight passion. Luckily enough for the era’s racial terms, “he is white, just like me,” as Nita dreamily tells her dad, before she changes into something skimpier for a quick second meeting and misty-eyed parting. The film’s 10-minute love story ends with the restless captain giving navigation instructions to his first mate: Make straight for home, so that we can return to the island without the civilized women. That colorful sequel would presumably need more than one reel…. —Scott Simmon

About the Preservation
The Love Charm was preserved from a two-color Technicolor nitrate print received by the New Zealand Film Archive from Jack Murtagh and Tony Osborne. The preservation work at Film Technology Company, Inc., was directed by George Eastman House and funded by the NFPF.

Further Viewing
Another 1928 Colorart one-reeler shot by Ray Rennahan, The Toy Shop, can be found on Flicker Alley’s DVD of The Garden of Eden (1928). His two-color Technicolor cinematography is at its most striking in the Southwest canyons and pueblos of Redskin (1929), in Treasures III. The Toll of the Sea (1922), the earliest-surviving two-color Technicolor feature, is in the first Treasures from American Film Archives. Competing two-color processes from other companies can be sampled through the three “Early Color Films” in More Treasures from American Film Archives and Sunshine Gatherers (1921) in Treasures 5.