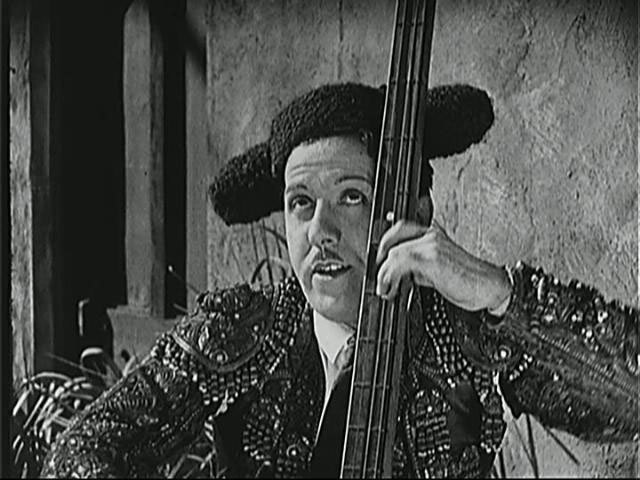 The once well-known comedian Monty Banks (1897–1950), star of a multitude of one- and two-reelers, is not recognized today as one of the great funny men of the silent era. Aside from a few devoted slapstick fans, few even recall his work. As Walter Kerr commented in The Silent Clowns (1975): “It is almost impossible now to describe a once-popular comedian like Monte Banks by speaking of his mannerisms; he doesn’t seem to have any…. He is likeable… but we cannot quite remember the man.” Banks, however, continues to delight supporters, who praise his grace and seemingly effortless stunt work.

Brilliantino the Bullfighter (originally titled Flood and Sand) is one of the first spoofs of Blood and Sand, Paramount’s smoldering matador melodrama that set box offices ablaze. Like Mud and Sand, starring Stan Laurel, the Banks parody was rushed into theaters in November 1922, while memory of the Valentino vehicle was fresh. The concept of Monty Banks impersonating the passionate matador must have been innately hilarious to audiences who had seen the original picture. Playing to his strengths, Banks based his first gag on colliding with a tree. It’s an opening stunt that sets low expectations. Nevertheless, Banks’ physical genius manages to shine through. He follows this thread through to the very end—a crazy tango between our hero and the vampy seductress, whose burning gaze takes a literal turn. And that is just the beginning of the gag.

Banks’s grueling stunt work was not without risks. He took a bad fall during this film and was put under medical care in New York. But the trouper was soon back on his feet and made 10 comedies the following year, including Oils Well!, also discovered from the New Zealand Film Archive.

Born in Italy as Mario Bianchi, Banks’s strong Italian accent encouraged his switch to behind-the-camera production roles with the coming of sound. He continued to appear on screen in small, often uncredited, parts. One of his last appearances was in the 1941 Technicolor remake of Blood and Sand.

About the Preservation
Brilliantino the Bullfighter was preserved in 2011 at Colorlab Corp. from a 35mm tinted nitrate release print found at the New Zealand Film Archive. The work was supervised by UCLA Film & Television Archive and sponsored by Turner Classic Movies as part of the NFPF's Save America's Treasures project. Thank you!