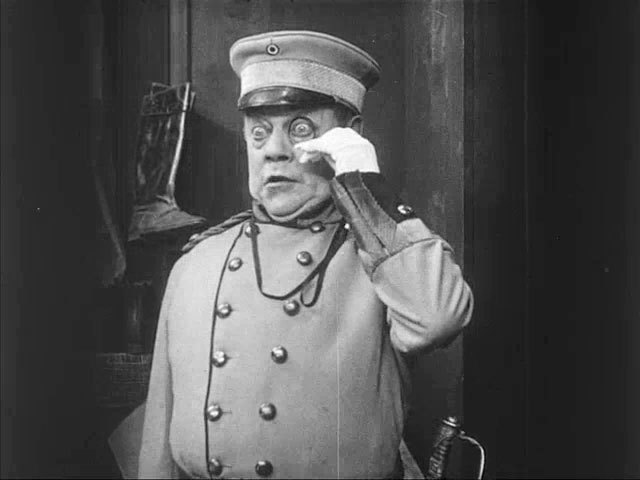 In signing an exclusive motion picture contract with beloved stage star Frank Daniels (1856–1935) in December 1915, Vitagraph scored quite a coup. Daniels, Broadway’s reigning “king of the comic opera” for 30 years, had mastered his craft in Gilbert and Sullivan productions of the late 1870s before hitting pay dirt as Packingham Giltedge in Little Puck, a part he played for seven years. His success in Victor Herbert’s The Wizard of the Nile brought more operettas written specifically for him and his company, including two more with music by Herbert. By the time he retired from the stage in 1912, Daniels had amassed a fortune and owned houses in West Palm Beach and Rye, N.Y. He was so well known that a cigar had been named in his honor.

But like so many old troupers, Daniels appears to have missed the limelight. When Vitagraph promised to develop features tailor-made to his comic talents, he couldn’t refuse. His movie debut as the title lead in Crooky Scruggs (1915), about the escapades of a happy-go-lucky prison escapee who passes as a rich rancher, received rave reviews. Critics singled out the theater business—his “irresistible” expressions and mannerisms—that he triumphantly brought to the screen. “Anyone who does not laugh at his antics is joy-proof,” pronounced Motion Picture News. A second five-reeler, What Happened to Father, released five months later also to excellent notices, continued to capitalize on Daniels’s stage persona.

The success led to Vitagraph’s deal with the actor for a series of weekly one-reel comedies directed by C. Jay Williams, with whom Daniels had worked on the two earlier features. The dozen or so “Mr. Jack” comedies about an elderly gent who continually gets into mischief were followed by a second and longer series inspired by the vaudeville favorite Captain Jinks, who preferred the ladies to the battlefield. (The reluctant soldier of the music hall ditty “Captain Jinks of the Horse Marines” also spawned a satiric novel, a musical comedy, a 1916 feature, and a 1975 comic opera.)

Captain Jinks, the Cobbler was one of two Jinks comedies released by Vitagraph for Christmas 1916 and, according to the U.S. copyright filing, was loosely based on the true story of celebrated conman Friedrich Wilhelm Voigt, who passed as a Prussian officer and commandeered funds from the Köpenick municipal treasury in 1906. In Vitagraph’s adaptation of the tale, the first movie version made in America, an army officer in some unpronounceable Central European town directs Jinks to repair his gear. Hounded by his nagging wife, the cobbler dons the officer’s uniform and parades about town. The impersonation proves so convincing that the burgomeister awards Jinks the officer’s bonus. When the ruse is discovered, the court gives Jinks a choice: two years in jail or at home with his wife. The film ends with cobbler pondering the pros and cons. The master of the arched eyebrow and comic strut, Daniels milks the story for all it’s worth. This is one stage personality who knew how to retool his style for the camera. The survival rate for Daniels’ films from the teens is dismal—neither of his features and virtually none of his nearly three dozen shorts can be seen today. But Captain Jinks, the Cobbler, the earliest in the Captain Jinks series known to exist, gives a glimpse of this comic opera legend at work. (A special thanks to Zoran Sinobad at the Library of Congress for his research assistance!)

About the Preservation
Captain Jinks, the Cobbler was preserved under the direction of the Library of Congress from a black-and-white nitrate print uncovered at the New Zealand Film Archive. The work was completed in 2013 by Colorlab Corp. through the support of a Save America’s Treasures grant secured by the NFPF.

Further Viewing
By Might of His Right, a Vitagraph comedy from 1915 saved through the project with the New Zealand Film Archive, can be viewed here.