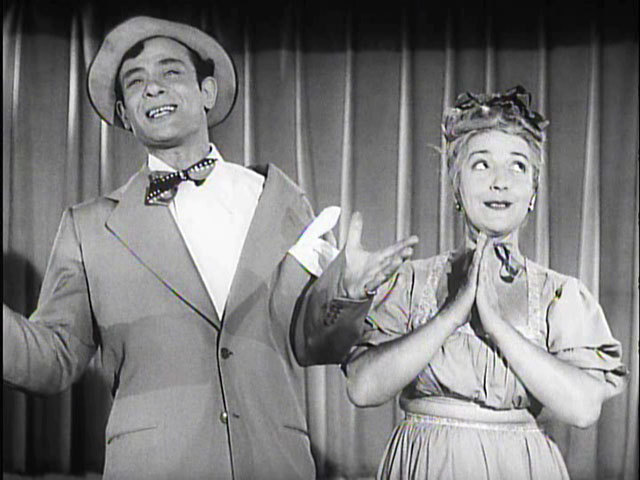 Catskill Honeymoon is a raucous marriage ceremony between Yiddish-American cinema and the Borscht Belt. Billed as a “Yiddish-American Musical Revue,” it was one of the very last Yiddish-language films to premiere on Broadway. Its success demonstrated that by 1950 the center of Jewish-American entertainment had moved from New York City to the Catskill resorts of upstate New York.

After a montage of road signs pointing toward Parksville, New York, the film begins with a female chorus singing about hitch-hiking to Young’s Gap Hotel, “the finest resort that we’ve seen.” Switching to Yiddish, they fantasize about finding love (“We’ll celebrate a honeymoon on top of the moon”) in between footage of the hotel's golf course, tennis courts, and pool. Beyond free advertising, these shots emphasize that for Jewish Americans of limited resources, the Catskill resorts (only a short distance from New York City) were a welcoming haven at a time when Jews were banned from many country clubs.

The film’s slight framing story involves the hotel congratulating an elderly couple on their 50th Wedding Anniversary by hosting a long, eclectic revue of comedy and musical acts in English and Yiddish, emceed by radio personality Al Murray. The music ranges from sacred to profane and classical to kitsch: crooned pop from Bobby Colt, multiple performances from the “great Jewish-American tenor” Jan Bart, “Yiddish folk songs in swing” from the Feder Sisters, prayers veering into arias from Pagliacci by female Cantor Bas Sheva, and “Hava Nagilah.” Viewers should keep in mind that while dialogue is subtitled, many of the Yiddish songs are not.

The Borscht Belt comedy, filled with corny puns and wordplay, is played with broad gesticulations. Mother-in-law jokes alternate with sketches on the outrage of paying ten cents for a bagel and the differences in Yiddish pronunciation between Galicians and Lithuanians. The revue concludes with a musical tribute to the then-two-year old State of Israel, with the Star of David and the American and Israeli flags in the background. The navigation between multiple nations and languages is fitting for a revue whose performers have effortlessly switched from English to Yiddish and back throughout nearly every scene.

Catskill Honeymoon was ideally suited to director Josef Berne, who alternated between directing Yiddish-language dramas and musical shorts for Hollywood. One of the latter, Heavenly Music (1943), won the Academy Award for Best Short Subject. Hymie Jacobson, who devised the revue and specialized in musicals, turned the film into a family affair—his comedian sister Henrietta Jacobson occupies the most screen time, often accompanied by her husband Julius Adler. Both were stars of the Yiddish theater, concentrated in New York’s Lower East Side. Julius had also acted in Maurice Schwartz’s Tevye (1939), a masterwork of Yiddish-language film.

With its performers, emcee, and audience often filmed separately and awkwardly intercut, Catskill Honeymoon has the airless feel of “canned vaudeville,” as critic J. Hoberman put it. Nevertheless, it became one of the longest-running Yiddish films. Up to the late 1970s, it was still a favorite in elderly and rehabilitation homes, having outlasted the Yiddish theatre scene and Young’s Gap Hotel, which closed in 1967. Increased social mobility and assimilation doomed the Catskills resorts, but not before they introduced performers such as Danny Kaye, Mel Brooks, Sid Caesar, and Jerry Lewis. Catskill Honeymoon preserves the performances of a grab-bag of entertainers from this tradition, allowing viewers to enjoy a night in the mountains.

About the Preservation
Catskill Honeymoon was preserved by the G. William Jones Film and Video Collection from an exhibition print believed to be the only surviving 35mm material. A new preservation negative and viewing print were created through lab services generously donated by Film Technology, Inc. and Chace Audio by Deluxe.

Further Reading and Viewing
J. Hoberman’s Bridge of Light: Yiddish Film Between Two Worlds (Temple University Press, 1991) is a seminal work on the subject. The 2010 updated edition from Dartmouth College Press includes the documentary DVD The Yiddish Cinema. The National Center for Jewish Film offers many subtitled Yiddish-language films for purchase, including Der Purimspiler (1937), starring Hymie Jacobson, and Teyve. An excerpt from the latter can be viewed here on the NFPF’s website.

About the Archive
The G. William Jones Film and Video Collection of Southern Methodist University supports education through the study, preservation, and presentation of moving images. Named after an SMU Professor of Cinema and Video, the archive contains over 9,000 film prints.