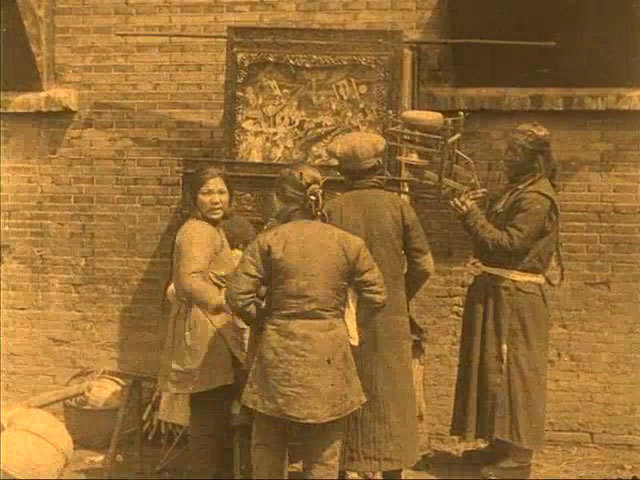 China and the Chinese, Part 2 (1917)
Distribution Company: Educational Films Corporation of America. Transfer Note: Copied at 18 frames per second from a 35mm tinted print provided by the New Zealand Film Archive and preserved by The Museum of Modern Art. Running Time: 16 minutes (silent, no music, incomplete? [Part 2 of a 5-part series]).

On the eve of World War I, as the political struggles in China made the news, Americans knew little about the vast and mysterious country of more than four hundred million people. But by the end of 1917 there were at least 10 documentaries available to satisfy curiosity about America’s new ally in the Far East. Virtually all were short subjects that, like the Burton Holmes travelogues from Paramount, played alongside features. Travel shorts with a more educational slant continued in circulation through schools and nonprofit groups for years afterward.

Of these offerings, the hugely ambitious Trip through China was “so vastly different from the general run of tour films that it stands in a class by itself,” wrote Motion Picture News. Five years in the making (or a less probable ten, in some tellings), the documentary was the brainchild of Benjamin Brodsky, a widely traveled Russian-born businessman who claimed to speak 11 languages. According to a 1912 Moving Picture World profile, the young entrepreneur had moved to China from San Francisco after the 1906 Earthquake and set up shop as a film exhibitor. Soon, as the American representative of Variety Film Exchange, he had a hand in distribution and by 1909 branched into film production in Shanghai and Hong Kong. While juggling business interests, he filmed his travels.

A Trip through China was probably fashioned from the 20,000 feet of negative that Brodsky brought back to San Francisco in 1915. Versions screened locally nine months later and in Los Angeles the following year. When distribution went national in March 1917, the ten-reeler was heralded as a “revelation.” As a “comprehensive” portrait of “every conceivable feature of Chinese life—her customs, fashions, and beliefs. It is at once geographical, historical and scenic, hence very interesting,” applauded Motion Picture News. Motography recommended booking A Trip as a featured attraction and predicted “limitless” advertising possibilities.

No complete copy survives today in the United States but the 18-minute fragment found in New Zealand gives a glimpse of the film’s all-inclusive approach. The section tours Beijing from the foreign legations to the Forbidden City, stopping along the way to sample the bustling markets and meet various dignitaries—American diplomats, revolutionary heroes, and faculty members of what is now Tsinghua University. (Another fragment at the Library of Congress surveys Shanghai.) Brodsky documented both the magnificent and the mundane and commented in the intertitles on what he saw. Always the showman, Brodsky concluded with a memorable finale (not seen in this fragment) of “fifty native maidens, whose headgear both in English and Chinese bore the legend ‘China Cinema Company’.”

Educational Film Corporation’s China and the Chinese had wider markets. As five one-reelers issued sequentially after the national release of Brodsky’s epic, the series packaged its moving-image survey of China in short installments perfect for both the classroom and as short travelogues for commercial movie theaters. Part 2, found at the New Zealand Film Archive, zeros in on urban Chinese workers—peddlers, barbers, cooks, street performers, laborers, and rickshaw drivers—and includes scenic views of Hankou and Chongqing from the water. Today, just watching the street traffic is fascinating.

The material is of such high quality that one wonders if Brodsky licensed footage for reuse in the Educational series, a common practice at the time. Although the footage from Part 2 is not found in the print of A Trip through China acquired by Taiwan's Chinese Taipei Film Archive from the Brodsky family nor the VHS copy deposited with the Library of Congress, both archival copies are far from complete. (Indeed the Chinese Taipei Film Archive restored their 108-minute copy in 2013 and reports that the New Zealand reel includes footage missing from their copy.) If any of you have stumbled on additional reels from either China travelogue, please let us know.

Many thanks to Teresa Huang from the Chinese Taipei Film Archive and Zoran Sinobad from the Library of Congress for helping with the research.

About the Preservation
This fragment from A Trip through China was preserved in 2013 at Colorlab Corp. from a 35mm tinted nitrate release print found at the New Zealand Film Archive. The work was supervised by UCLA Film & Television Archive and funded by the National Film Preservation Foundation.

China and the Chinese, Part 2 was preserved in 2013 at Colorlab Corp. from a 35mm tinted nitrate release print found at the New Zealand Film Archive. The work was supervised by The Museum of Modern Art and funded by the National Film Preservation Foundation.

Further Reading and Viewing
Under the sponsorship of the Imperial Japanese Railroad, Benjamin Brodsky returned to East Asia in 1917 to make a second travel feature, Beautiful Japan (1918). The film survives as a 16mm print at the Smithsonian’s National Museum of Natural History. Excerpts are included in the NFPF’s DVD anthology Treasures from American Film Archives: Encore Edition (2005). Brodsky also repurposed some of his footage in A Trip through Japan with the YWCA, a section of which was recovered through a preservation partnership with the National Film and Sound Archive of Australia and viewable here.

Li-Lin Tseng has written several articles about Brodsky, including “The Story Teller: Benjamin Brodsky and His Epic Travelogue, A Trip Through China (1916),” in The Journal of Northeast Asian History (Winter 2013), pp. 7-46.

For more about educational films, see Paul Saettler’s The Evolution of American Educational Technology (Information Age Publishing Inc., 2004) and the anthology Learning with the Lights Off: Educational Film in the United States (Oxford University Press, 2012), which is supplemented by an invaluable companion website with links for online viewing. Rick Prelinger’s The Field Guide to Sponsored Films (NFPF, 2006), available both as a printed book and a PDF file, also spotlights a number of educational films.