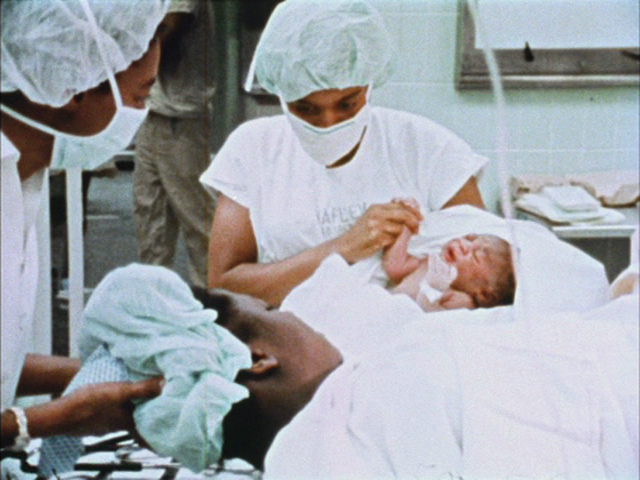 In the early 1970s minorities were grievously underrepresented in the medical professions: Code Blue was a recruiting film created to remedy this problem. It was also “the first real film” of Blackside, Inc., the Boston-based documentary company that went on to produce the Peabody and Emmy–winning series Eyes on the Prize (1987; 1990), widely regarded as the definitive documentary on the Civil Rights movement.

Founded by Henry Hampton (1940–98) in 1968, Blackside was dedicated to chronicling modern stories of civil rights and social justice, especially among the disenfranchised and poor. Starting out with short public service announcement spots and industrial/educational films, it grew into the largest African American–owned film production company during the late 1980s. Code Blue was Blackside’s first calling card and major success.

The impetus for the film came from Dr. Therman E. Evans, an activist for recruiting African Americans into the health professions. After meeting Hampton and filmmaker Howard Dammond, Dr. Evans was eager to work with an African American–owned company and approached Blackside with the idea of making a recruiting film that could reach even wider audiences than his school speaking engagements.

Producer and co-editor Dammond devised a treatment and hired independent filmmaker Romas Slezas as the project’s cinematographer, co-editor, and director. Alongside cameraman Billy Jackson, the team began location shooting in Nashville, Tennessee; Oakland, California; and New York City. The $43,000 budget was largely supplied by the National Institutes of Health and the Bureau of Health Manpower Education.

Code Blue combines Dr. Evans’s advocacy school speeches with cinéma veritié–style footage of a Harlem emergency room and the live birth of an African American baby at the hands of African American doctors, a female doctor conducting outreach in Nashville’s economically distressed areas, and interviews with a diverse array of students and medical practioners. For the latter, the filmmakers tried to find “people who weren’t academics,” in Dammond’s words, but were instead more relatable: “We were trying to recruit people who weren’t necessarily the Phi Beta Kappas and the Harvard people.”

Code Blue won a CINE Golden Eagle Award and screened at Venice’s Festival dei Populi, the oldest European festival dedicated to the documentary films. More importantly, it was used in hundreds of high schools and medical training curricula for over 20 years. Roman Slezas thought Code Blue “was not only important for Blackside but it was important for black kids who saw this and were moved and [thought] about going into medicine. And you didn’t have to be a man to do it, because there were lots of women” featured onscreen. Over the years Dr. Evans would engage in countless conversations with medical students and professionals who approached him to say “that film that you made is responsible for my being in medical school or nursing today.”

About the Preservation
Washington University in St. Louis is the repository of the Henry Hampton Collection, containing all of the archival material belonging to Hampton and Blackside, Inc. No original elements from Code Blue are known to survive, so the university used two 16mm company prints, from which Colorlab produced a 2K scan. This was color corrected to eliminate magenta fading and then output to a 16mm internegative and an answer print. The soundtrack was preserved on magnetic stock and on a negative optical track. All lab work was funded through an NFPF preservation grant.

Further Reading and Viewing
For more on Blackside and Henry Hampton, consult Jon Else’s True South: Henry Hampton and Eyes on the Prize, the Landmark Series That Reframed the Civil Rights Movement (Viking Press, 2017). All of the interviews conducted for Eyes on the Prize I and II can be viewed online. Another documentary co-directed by Warren Slezas, Watermen (1968), can be viewed at Folkstreams’s website.

About the Archive
Washington University’s Film & Media Archive is a unit of its Library’s Department of Special Collections. Opened to the public in 2002 following the acquisition of the Henry Hampton collection, the archive has the mission of preserving, collecting, and making publicly accessible documentary film and other media “which chronicle political and social injustice of the 20th century and beyond with an emphasis on the African American experience." The archive holds 6,500,000 feet of film and has preserved six films through NFPF grants, including the Civil Rights documentary A Regular Bouquet: Mississippi Summer (1964), directed by Richard Beymer.