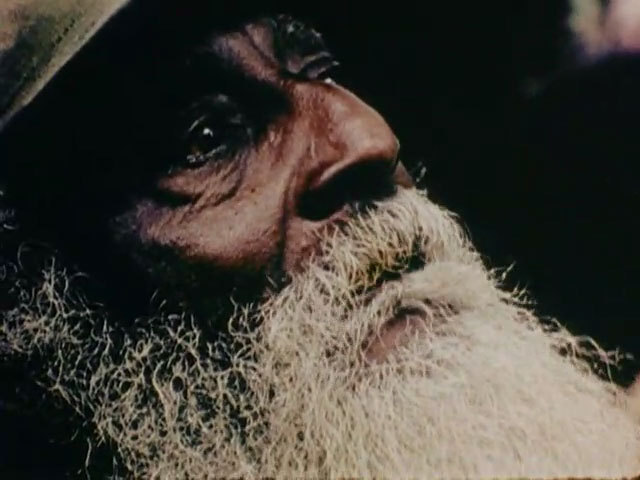 Protean artist Ed Emshwiller (1925–90) combined careers as a painter, illustrator, filmmaker, and teacher. After World War II, he studied at the École des beaux arts in Paris on a veteran’s grant. While producing abstract expressionist canvases, he also came to dominate science fiction illustration throughout the 1950s, producing more than five hundred book and magazine covers. In describing what drew him to filmmaking, he said, “Movies are, by nature, a perfect medium for mating various arts.” Emshwiller’s first released film, Dance Chromatic (1959), superimposed the gestures of action painting on the movements of dancers. By the early 1970s, he was experimenting in video, creating computer-generated variations on his artworks.

George Dumpson’s Place (1965) is one of several short films in which Emshwiller explored the worlds of other artists with whom he felt strong sympathy. George Dumpson was an impoverished African American handyman who squatted on land on Long Island. Emshwiller saw him as a folk artist, a scavenger and assembler of found objects in the tradition of Joseph Cornell (see Rose Hobart): “I felt he was an artist because my definition of an artist is a person reorganizing the world, creating a world in his internal likeness.” In the film Dumpson’s overgrown “place” on Long Island is a densely textured mystery of broken dolls, ruined sculpture, and tangled housewares, a world of uncertain boundaries between rural and urban landscapes, interior and exterior spaces, investigated through the sinuous tracking shots for which Emshwiller was noted. At the heart of his maze is Dumpson, glimpsed at the end of a walkway, followed by the startling close-up flash of his face, all white beard and black skin. Sadly, George Dumpson did not live to see the finished film.

If Emshwiller’s films are difficult, it’s because of their deceptive simplicity. “The perimeters of our understanding are generally defined by our language,” he commented in the year of this film. “I do feel that with exposure people can come to understand and appreciate forms of film other than the word-oriented, visually embellished film. And I feel that films that have more of an architectural or musical, mathematical or emotional tone, which don’t try to spell something out, can be very effective and very powerful.” —Scott Simmon

About the Preservation
In addition to his other careers, Ed Emshwiller was a tireless advocate for a geographically diverse national community of film and media centers—of the sort that this anthology also celebrates—especially through his work in the 1970s for the National Endow­ment for the Arts and the Association of Independent Video and Film­makers. Anthology Film Archives has mounted a project to identify, restore, and make available all of Emshwiller’s films. Although the preprint material for George Dumpson’s Place has been lost, Anthology preserved the film from surviving prints in 1999 through Treasures of American Film Archives funding.