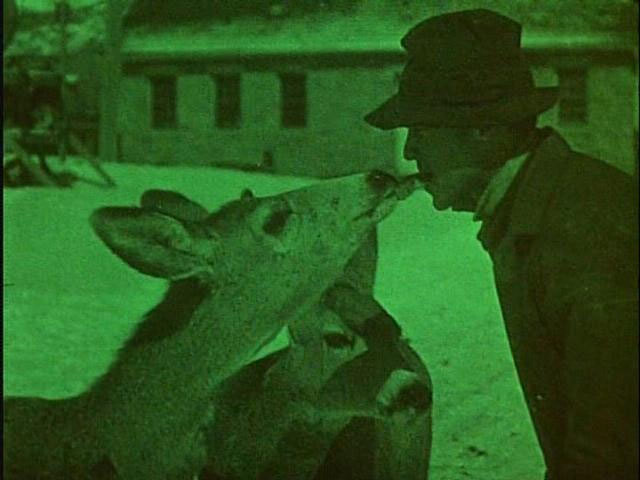 By the 1920s educational films were a staple of the American film industry. More than just a market niche, educational films included nonfiction films of all types—from industrials like Birth of a Hat (ca. 1920) to safety films like Ask Daddy (1923)—and were shown in theaters as well as just about any noncommercial venue that had a projector. Moving Picture Age: A Monthly Publication Devoted to the Subject of Visual Instruction regularly announced scores of new educational releases.

Mules and Gob Talk fed this market. It was just one of some 150 travelogues or “scenics” produced by Chester Films between 1918 and 1921. C.L. Chester, a veteran travel filmmaker for the Edison Company and Paramount, founded his own company in 1916 with the aim, as he proclaimed in Moving Picture World, to “standardize” and improve the production of travel pictures. “In our work every picture will be carefully brought out and ninety per cent of the scenes planned in the office. I have myself visited twenty-eight countries with a motion picture camera and have lived on every continent, except Australia. I know the weather and the light conditions thoroughly.” Although Chester’s ambitious plans called for production to begin that year, the films appear to have been put on hold until he struck a partnership with the popular outdoors magazine Outing. The publication cross-promoted Chester's travelogues as “showing expeditions to savage lands, in strange places, along untraveled trails.”

In 1919, Chester spun off a new series called Screenics, which combined footage of wild animals with humorous intertitles. The concept was not entirely new. One of the selling points of Outing-Chester Pictures had been that they were “edited and titled in a sympathetic spirit that sees the fun, and passes it on to the audience.” Judging by Mules and Gob Talk, Screenics took the formula one step further by anthropomorphizing the animals for easy laughs. The surviving print of Mules and Gob Talk (the original introduction is missing) begins with spectacular vistas of Yellowstone National Park and majestic herds of buffalo (“a snooty lot” in the intertitles) and ends with “wild” deer being fed by tourists and foraging in garbage cans. Were films like the Screenics the harbinger of TV shows like The Planet's Funniest Animals? One thing is certain, Chester knew where to find the most laughs (and probably the most return on his investment). In 1920 he launched Chester Comedies with a series of shorts showcasing the adventures of Snooky the Humanzee, a chimp with the smarts of Rin-Tin-Tin. Snooky’s Twin Troubles (1921) is slated for preservation through the New Zealand Project. Stay tuned!

About the Preservation
Mules and Gob Talk was preserved in 2012 at Film Technology Company, Inc., from a 35mm tinted nitrate release print found at the New Zealand Film Archive. The work was supervised by the Academy Film Archive and funded by the National Film Preservation Foundation through a Save America's Treasures grant.

Further Reading and Viewing
See Paul Saettler’s The Evolution of American Educational Technology (Information Age Publishing Inc., 2004) for a history of educational films and the visual instruction movement of the early 20th century and the anthology Learning with the Lights Off: Educational Film in the United States (Oxford University Press, 2012), which is supplemented by an invaluable companion website with links for online viewing. Rick Prelinger’s The Field Guide to Sponsored Film (NFPF, 2006), available both as a printed book and a PDF file, describes some educational films.

For a more lyrical approach to the scenic, see Tropical Nights (1920), also preserved through the NFPF's partnership with the New Zealand Film Archive.