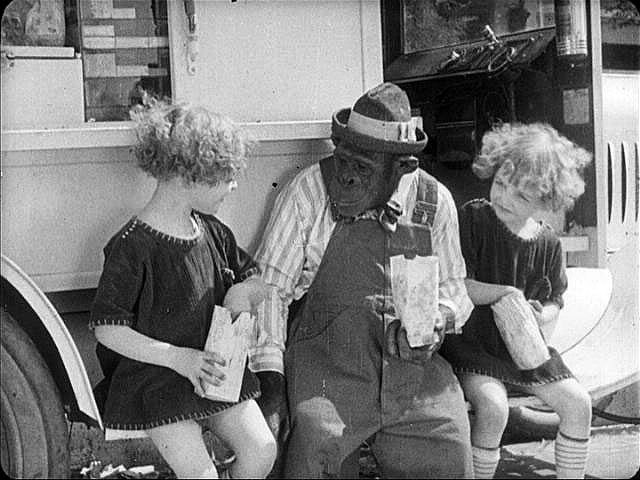 The 1910s and 1920s were golden years for Hollywood animal actors. Leading the pack were Pepper the cat, Susie the chicken, Rex the Wonder Horse, Anna May the elephant, the Dippety-Do-Dads monkeys, and, of course, movie superstar Rin-Tin-Tin and canine knock-offs Sandow, Silverstreak, Peter the Great, and Ranger.

But a special niche was carved out by Snooky, the tobacco-smoking Humanzee. The daughter of stage chimp Napoleon and his partner Sally, the child actor initially appeared on the screen with her parents. But under the tutelage of trainer Frank Rounan, who raised Snooky as his “adopted daughter,” she was destined for much more. Her big break came in 1920 when she donned overalls as the male Snooky for Chester Films. In a series of two-reel comedies released over the next few years, the cross-dressing chimp proved herself the equal of any situation.

In Twin Troubles, Snooky comes to the rescue after Officer Casey’s twin daughters are kidnapped as part of a preposterous plot to enter them in a beauty contest and make off with the $1,000 prize. There is a lot of slapstick business along the way but the real comedy is rooted in the fact that the chimp passes as the Caseys’ next-door neighbor. As American Magazine reported in 1921, Snooky “can perform any ordinary act of a human being…fire a revolver or a rifle, shuffle cards, tie and untie a knot, build and light a fire, shake dice, sweep, and do many other things.” Only when push comes to shove does Snooky show her chimp side, taking off her shoes to tie knots with her toes and save the day.

In 1923, Rounan broke with Chester Films, seeking a court action to stop the distribution of two films. By then, however, Snooky was at least eight, the age at which chimps reach adulthood and become too strong to control before the camera. Colliers had already reported two years earlier that Snooky had bitten a child actor on the set and got a “whipping.” Rounan tried a comeback in 1924, but Snooky was ready for retirement. He left her at the San Diego Zoo, where the chimp did not take well to life behind bars and is reported to have started a fire in her cage after a fan gave her a cigarette.

About the Preservation
Snooky’s Twin Troubles was preserved in 2013 at Colorlab Corp. from a 35mm nitrate release print uncovered at the New Zealand Film Archive. The Library of Congress supervised the NFPF-funded preservation work.

Further Reading and Viewing
Chimps play in the movies only as youngsters and by age 6-8 grow too physically powerful to manage on a set. To accommodate apes whose entertainment careers are over, animal welfare advocates have created a network of primate sanctuaries. For more information, see the website of the North American Primate Sanctuary Alliance.