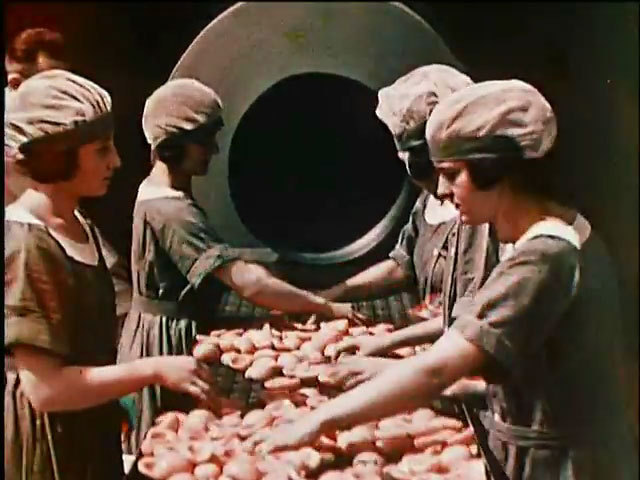 The only initial hint that Sunshine Gatherers is an elaborate advertising pitch is the red shield shape enclosing the title. For viewers of 1921, deluged with magazine ads and grocery shelves sporting this shape and color, the association with the Del Monte brand of fruits and vegetables would have been more than subliminal.

From the 1880s on, colorful art labels on citrus crates shipped east had reinforced an association of California with sunshine, beauty, and health. This abundant “fruited plains” imagery of the West drew from a pastoral myth older than the Wild West of itinerant gunmen and miners. Sunshine Gatherers gives us a California history that opens in peaceful conquest with the arrival in the 1760s of Father Junípero Serra “from Spain’s romantic shores.” Mission revival romanticism was at a height in the early twentieth century, and the adobe remains of Serra’s string of Franciscan missions are frequent backdrops in the first California films. In Sunshine Gatherers the missionaries teach Indians the “first principles of horticulture.”

The distortions here are many. When Spanish missionaries arrived in what became California, more than a quarter-million Native Americans were thriving—and on a diet rich in wild fruits, including peaches, cherries, and raspberries—before most of the population was wiped out, less by massacres than by imported diseases. But the history here is idyllic. Print ads touted Sunshine Gatherers as “the Story of America’s Garden of Eden.”

Dried fruits and less-perishable varieties of citrus had been sent east for decades, but Sunshine Gatherers promotes the canning of delicate fruits like apricots and peaches that had previously been consumed out of season in the Northeast only after the expensive luxury of shipment in refrigerated trains. Now California’s sunshine would be packaged for the nation year-round. The Del Monte shield logo, introduced in 1909, had been featured in an earlier promotional film, the one-reel The Winning of a Peach, made for the state growers’ association by the California Motion Picture Corporation in 1914 (the year it also made Salomy Jane). A larger-scale campaign around the Del Monte brand was launched after the effective monopolization in 1916 of the state’s canneries under the California Packing Corporation.

In Sunshine Gatherers’ soft sell, California’s health is exportable thanks to modern technology. (The three-piece metal canning method demonstrated in the film had been introduced 10 years earlier.) Print ads headlined that Del Monte fruits were “Canned in the Sunny Orchards, where They Grow,” a claim carried over to the film’s smiling young female cannery workers bathed by sunlight from picture windows opening onto orchards. Only halfway through the film does the Del Monte brand appear, unobtrusively on fruit crates and then on cans emptied by graceful hands. Vegetables, presumably not as picturesque, went unseen in the ad campaign. The post–World War I collapse in commodities prices had included fruits, but the campaign of which this film was a part succeeded in almost doubling sales. More than 7 million cases of California peaches were shipped in 1922, up from 4 million the previous year.

The post–World War I Del Monte ads in women’s magazines such as Good Housekeeping and McCall’s were typically in color. Sunshine Gatherers employs “Prizma natural color,” a two-color process inaugurated in 1918. Prizmacolor attempted to capture with two color records as much as possible of the visible spectrum, which requires three records (red, green, and blue). Because the Prizma camera took sequential—rather than simultaneous—images on a double-length negative for its red-orange and blue-green records, any rapid motion resulted in one-color ghosting, as evident here especially with the cascading fruit. A superiority of the two-color process by Technicolor, the rival that effectively ended Prizma after 1923, was that its beam-splitting prism recorded two colors simultaneously on two frames, eliminating this flicker. Both companies made their release prints on film coated on two sides, each tinted with one of the records.

The director of Sunshine Gatherers, George E. Stone, ran his own small film studio and laboratory in Carmel-by-the-Sea, California, near where the opening seaside reenactments were staged. Stone (not to be confused with longtime character actor George E. Stone) made a number of celebrated nonfiction films, including the four-reel How Life Begins (1916); he returned from World War I service in Europe to become Prizma’s West Coast manager. Sunshine Gatherers was, thanks to its color, never merely relegated to the “educational” circuit of schools and churches. In Manhattan it opened in April 1921 alongside a new Fatty Arbuckle comedy, and it was featured in a screening of the previous year’s best advertising films at the National Association of Manufacturers’ 1922 convention, with such intriguing but now-lost films as Johns-Manville’s The Story of Asbestos and DuPont’s Farming with Dynamite.

About the Preservation
In the years before the preservation of Sunshine Gatherers by the Museum of Modern Art, the colors on the original nitrate print deteriorated wherever they came in contact with an intertitle. (Intertitle footage was often originally less carefully processed, leaving a residue of chemicals that can react with the image over time.) Thus a few seconds of poorer-quality color follow each intertitle.

Further Viewing
Excerpts from The Winning of a Peach (1914) are included in the California Packing Corporation’s promotional film Golden Harvest (circa 1955), viewable at the Internet Archive. The earliest surviving feature in the two-color Technicolor process, The Toll of the Sea (1922)—with Santa Monica, California, and the Pacific Coast standing in for China—is in the first Treasures from American Film Archives DVD set. Other color processes are demonstrated in the “Early Color Films” series on More Treasures from American Film Archives and on films in the Discovering Cinema DVD (Flicker Alley).