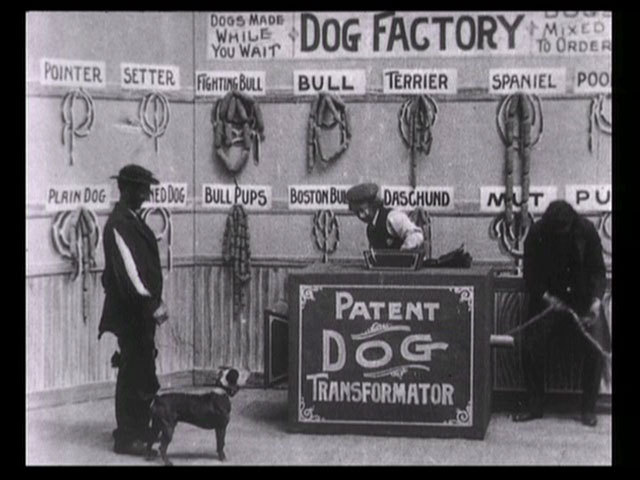 The wonderfully surreal Dog Factory (filmed in Edison’s New York City studio on April 15, 1904) captures a theatrical vaudeville sketch of the sort that made up much narrative film in the first five years of the century. Its director, Edwin S. Porter, had made his landmark full-reel The Great Train Robbery a few months earlier, but shorter films like this were still more typical. Dog Factory is an elaboration on a popular “comic” sketch, which seems grim now, in which dogs were turned into sausages. On film the sketch appeared first in France with the Lumière brothers’ The Sausage Machine (1895) and was copied in Biograph’s Sausage Machine (1897) and Porter’s own Fun in a Butcher Shop (1901), to mention only those U.S. remakes that also survive as paper prints. In the clever elaboration of Dog Factory, it becomes evident that these “sausages” are in fact convenient storage devices for DOGS MADE WHILE YOU WAIT and DOGS MIXED TO ORDER (as the partly obscured signs at the top of the frame read). The two enterprising men—Germans, according to Edison’s catalog—first buy dogs from a tramp and then manufacture, with their patented “Dog Transformator,” appropriate breeds for a range of vaudeville types. —Scott Simmon

About the Music
Since I first saw it, this film has been one of my “pets,” and perhaps that is why, when casting about for an appropriate rag to play, I settled upon Scott Joplin’s “The Favorite” (1904). In nickel­odeons, a film such as this was sure to have been “ragged” by many pianists. Joplin’s jaunty piece works well because the principal tune carries an arresting turn of phrase that neatly matches the dog-into-sausage-and-vice-versa cranking. Again like a nickelodeon pianist, I couldn’t resist referring to various “doggie” songs—particularly “Daddy Wouldn’t Buy Me a Bow-Wow” (Tabrar, 1892), now forgotten but still endearingly flippant. —Martin Marks