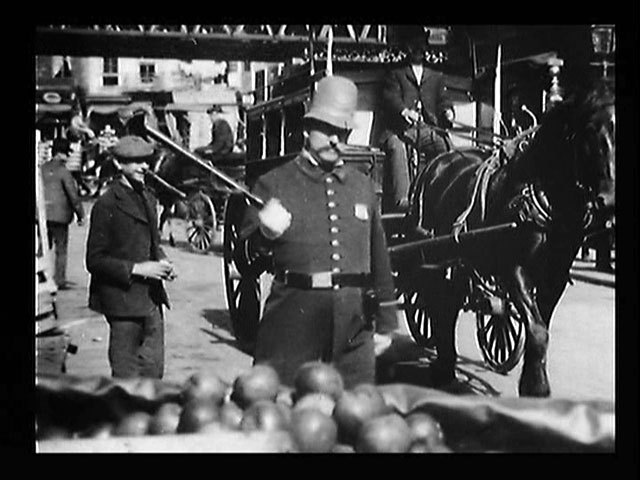 As with many early actualities, it is difficult to say how much of Move On is document and how much was staged for the camera—probably a little of both. Although we treasure the film now for capturing so evocatively the commercial street life of Lower Manhattan in fall 1903, the film was marketed by Edison for its reputedly comic drama of watching police hustle along what we’re told are the Jewish or Italian immigrant pushcart vendors: “It is interesting and amusing to see the expressions of combined fear and anxiety on the faces of the men as they hurry away; the fear of being arrested if they stand, and of losing some of the wares if the carts strike an obstruction in the street. Very fine photographically.” —Scott Simmon

About the Music
For such a brief, one-shot film, a single piece is perfectly sufficient—but what kind? A popular song? A folk song? A dance? Each one of these styles could work, but I chose a classical piece: the third in Schubert’s beloved Moments Musicaux, op. 94. One reason is that the piece has a persistent clip-clop rhythm that seems to “move” with the world on-screen. Furthermore, the music’s rather folklike style, as well as its “Schubertian” mixture of pathos and humor, seemed just right for this seriocomic slice of life. —Martin Marks