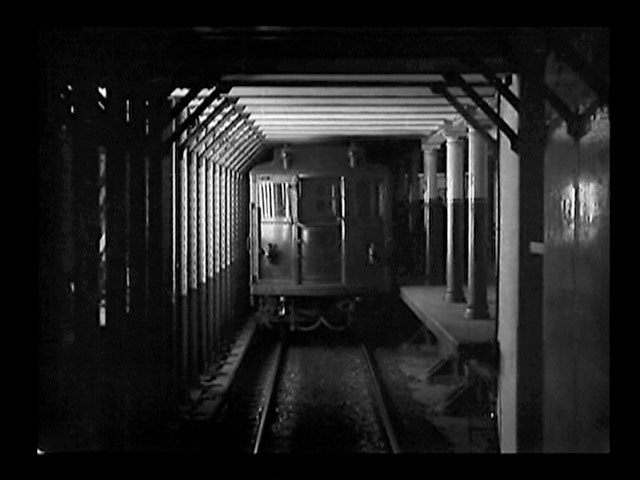 This film documented New York City’s newest marvel, the subway, less than seven months after its opening. What would become the largest system in the world was inaugurated after decades of political wrangling and engineering challenges on October 27, 1904, and photographed by the Biograph cameras on May 21, 1905.

The film is not as simple as it first appears. It required coordinating three trains: the one we watch, the one carrying the camera, and a third (glimpsed on the parallel track) to carry the bank of lights. Films that put the spectator at the front of a train had long been a popular novelty, and they became a brief craze later in 1905 with “Hale’s Tours,” which actually sat audiences in mock train carriages. Interior New York Subway, 14th Street to 42nd Street appears to consist of a single shot, although Billy Bitzer paused his camera at least once to shorten our journey. (Bitzer is best known for his later cinematography for D.W. Griffith’s films, including The Lonedale Operator). We travel beneath Manhattan’s East Side on the Interborough Rapid Transit (IRT) from Union Square at 14th Street to Grand Central Station at 42nd Street, where more elegantly dressed subway patrons must never have been recorded.

The visual syncopation of the pillars in the subway tunnel was difficult to record—both on film and on our transfer to video—and was a cause for concern when the subway opened. “Is subway travel injurious to the eyes?” the New York Times asked in its opening day reportage, and it provided a practical answer: “A well known oculist says that looking at the rows of white columns is very straining. Therefore, don’t look at them.” —Scott Simmon

About the Music
In 1905, musicians might have thought to accompany this film with marches, or perhaps songs whose titles evoked New York. I took a more fanciful approach, hoping to do justice to the film’s beautiful, almost abstract visual qualities. The music is mostly improvised but based on “The Mill,” a once well-known piano piece by Adolf Jensen (1837–79). It can be found in Erno Rapée’s Motion Picture Moods, in­dexed under “Railroad.” Once the subway train stops at Grand Central Station and platform patrons come into view, a change of pace seemed in order, so I switched to a warmer and more intimate period piece—the song hit “Ida! Sweet as Apple Cider” (Leonard, Munson, 1903). —Martin Marks

About the Preservation
This film was preserved by the Museum of Modern Art from the original Biograph camera negative.

Further Viewing
The DVD set More Treasures from American Film Archives includes “The Streets of New York,” three earlier films of Man­hattan, as well as From Leadville to Aspen: A Hold-Up in the Rockies (1906), a “Hale’s Tours” film shot by Billy Bitzer.