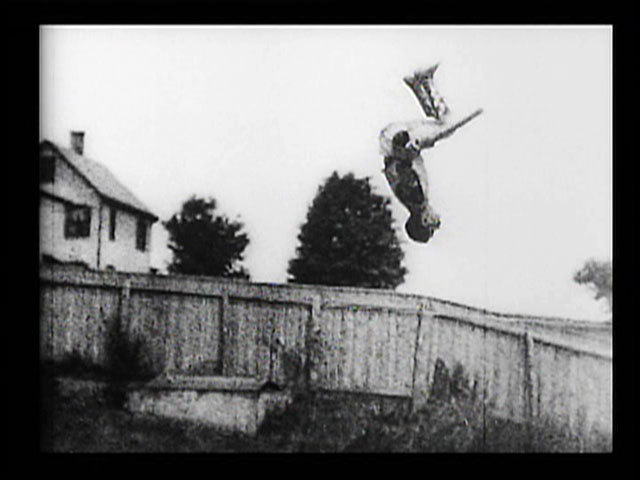 Machines to project films onto screens were invented almost simultaneously in 1895 in France, Germany, England, and the United States. But during the previous year the new phenomenon of moving images was available exclusively through Edison’s “kinetoscope,” the individual viewing machine first demonstrated publicly in 1893 with Blacksmithing Scene. On Saturday, April 14, 1894, the first kinetoscope parlor opened in New York City. Twenty-five cents bought a look into five machines, each showing a film that ran less than a minute. For fifty cents, you could view all ten machines. On the first day of business, the parlor took in about $120, without advertising. The movie business had begun.

The two 1894 films here are among the eighty or so produced by the Edison Manufacturing Company that year for its kinetoscopes (the word was coined by Thomas Edison from the Greek for “movement,” kinet, and for “watching,” scopos). Most of the films drew on vaudeville performers appearing in New York City who could be persuaded to take the short trip over to Edison’s West Orange, New Jersey, laboratory to have their acts “kinetographed.”

Luis Martinetti, Contortionist is typical of the look of films produced in Edison’s New Jersey studio (known as the “Black Maria,” from slang for the police wagon Edison employees thought it resembled). Luis Martinetti, a flying-ring acrobatic contortionist, was one of the two Italian “Martinetti Brothers” who debuted in America in September 1894. “They seem to possess un­limited strength and skill, and performed several feats new to this side of the water. They were recalled several times and made a most pronounced hit,” reported the New York Clipper. For his performance for Edison’s camera on October 11, 1894, Luis was paid $14.20. (The “R” on the image is not a registration mark but indicates that the film was shot for the Raff & Gammon Company, then Edison’s exclusive distributor of kinetoscope machines in North America.)

Caicedo, King of the Slack Wire, in contrast, presents an act that wouldn’t fit into the small studio and so was filmed in the backyard of Edison’s facility. The Venezuelan rope walker Juan Caicedo had been appearing in New York since May 1894 at Koster & Bial’s Music Hall (until being replaced there by Martinetti in September). The New Jersey Orange Chronicle re­ported on Caicedo’s performance for the camera on July 25, 1894: “A remarkable exhibition was given at the Edison laboratory on Wednesday morning, when Signor Caicedo, the king of the tight rope dancers, who has been appearing at Koster & Bial’s, came out and was photographed by Professor W.K.L. Dickson.... Those who have seen Signor Caicedo perform his marvelous acts need no description of them. The kinetographic ‘Black Maria,’ as it is called, in which the pictures are usually made, was of course not available for the purpose, as it would have been impossible to stretch a tight rope in the limited space of the building. The tight rope of wire was therefore stretched in the open air directly north of the building. It is the first time that any kinetographic pictures have been taken in the open air, and the results are looked forward to with interest.” Because the film was photographed at around 40 frames per second, there is a slow-motion effect even at the 24 frames per second seen here. —Scott Simmon

About the Music
Thomas Edison had originally hoped to combine kinetoscope machines with phonographs, so that customers could hear recorded music while watching the films. In fact, only a few such synchronized machines were made. But when kinetoscopes gave way to projected motion pictures, most of the early exhibitions took place in vaudeville theaters. In such venues the acts were routinely accompanied by live music in popular styles (songs, dances, marches, etc.), just as were performances in circuses and the like. These traditions formed the basis for what I played here.

To make the films a complementary pair, I used once familiar songs and rendered them in contrasting styles. (The films being so short, each song is pared down to its essential tune.) Martinetti twists to a famous circus ballad, “[The Man on] The Flying Trapeze” (Leybourne, Lee?, 1868), played quietly, in a low register, with serpentine figures. Caicedo leaps high to a vaudeville favorite, “Ta! Ra! Ra! Boom De Ay!” (Sayers?, 1891), played “big” to match the slow-motion drama. —Martin Marks

About the Preservation
Both films came to the Academy Film Archive through the generosity of Ray Phillips, who has built (or rebuilt) kinetoscope machines for museums around the world and is author of Edison’s Kinetoscope and Its Films (Greenwood Press, 1997). Caicedo, King of the Slack Wire was copied from a print saved by the Archives du film at Bois d’Arcy, France.

Further Reading
For an overview of the earliest American cinema, see Charles Musser, The Emergence of Cinema: The American Screen to 1907 (University of California Press, 1990).