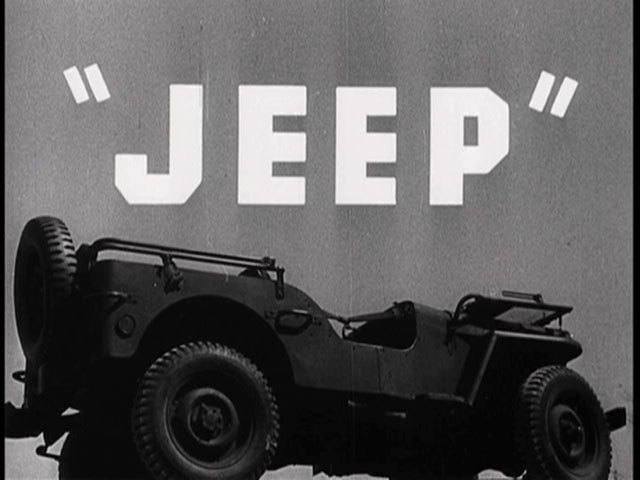 It was the job of the Office of War Information’s Overseas Branch, producer of this film, to convey both facts and feelings about American democratic life to audiences abroad, military and civilian. OWI films are propagandistic and patriotic, befitting their wartime mission, and at their best resonate with a heartfelt optimism.

The Autobiography of a Jeep is narrated by the jeep itself in an un­assuming, populist voice. The film interweaves a lighthearted vision of a democratic vehicle with accurate facts about the jeep’s creation, size, and capabilities. The script was by Joseph Krumgold, whose direct prose also brought him Newberry Medals for his children’s books And Now Miguel (1954) and Onion John (1960). Director Irving Lerner had honed his documentary skills at the Frontier Films collective in the late 1930s and after the war directed critically acclaimed, minuscule-budget independent features.

As it became clear in 1940 that Germany and Italy were racing victoriously through Europe and North Africa, the U.S. Army issued specifications for a simple, rugged vehicle to be created within forty-nine days. The first working prototype was displayed before the Sep­tem­ber deadline. By the end of the war in 1945, more than seven hundred thousand jeeps had been produced by the Willys-Overland Company, owner of the design, and the Ford Motor Company. The film recounts the origin of the name “jeep” in the quick pronunciation of “G.P.”—although the initials initially came not from “General Purpose” but from Ford’s duller production abbreviation: “G” for government vehicle and “P” being the symbol for eighty-inch-wheelbase cars. When The Autobiography of a Jeep was released midwar in 1943, the Allies could look to successes—reflected in the shots of President Roosevelt riding in a jeep to meet with Churchill at Casablanca after the victory in North Africa.

The film celebrates the Amer­i­can can-do spirit of mass production at the same time as it humanizes the vehicle. A surprising number of World War II–era books for children and adults also featured talking jeeps, who typically dislike playing in the mud but end by performing heroically with their soldier pals—The Little Jeep (1942), “Watch Me,” Said the Jeep (1944), and Jerry the Jeep (1945) among them. Clearly the jeep had won acceptance as the people’s vehicle. “The rumor is going around that the jeep is here to stay,” this film ends prophetically. Postwar jeeps were marketed to returning servicemen as farm and construction vehicles in Willys-Overland ads: “When I get back, I’ll get a Jeep. It’ll make a swell delivery car!” —Scott Simmon