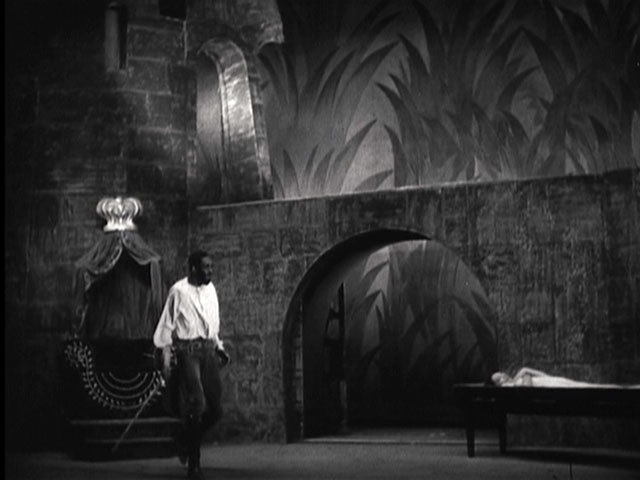 Priceless historical footage can be “lost” within unlikely films. We Work Again, a Depression-era documentary on African American reemployment, also includes a forgotten record of the first professional play staged by Orson Welles.

It had long been assumed that no sound or moving images survived from Welles’s legendary “Voodoo Macbeth,” his 1936 Harlem stage production of Shakespeare’s play, set in Haiti with an African American cast. As one of Welles’s many biographers lamented in 1996, “Nothing remains but still photographs and memories.” However, We Work Again turns out to include the production’s final four minutes.

Made for the U.S. government by Pathé News in 1937, We Work Again promotes the job-training accomplishments of the Works Prog­ress Administration for African Americans, primarily in New York City. (A companion film, Work Pays America [1937], surveyed the WPA’s national programs.) Created in 1935 as President Roosevelt’s primary New Deal jobs program, the WPA found work for more than eight million people in its eight-year existence. Unemployment in Harlem in 1935 was above 80 percent, and riots against white-owned businesses broke out that year under the slogan “Don’t Shop Where You Can’t Work.” We Work Again visually touches on such despair before surveying the new WPA programs for skilled workers, laborers, child welfare, and adult literacy. The presumption in the film of limited employment options for African Americans probably reflects the era more than the WPA itself, which broke ground in federal financing of African Amer­ican artists. Among those seen participating in the WPA’s Federal Music Project is a group led by Juanita Hall (1901–68), subsequently known for her roles in the Broadway and film versions of South Pacific.

Orson Welles was twenty years old when he directed the Macbeth seen here. The offer came from his early mentor John Houseman, who had been appointed head of the Negro Theatre Unit of the WPA’s Federal Theatre Project. (The $23.86 per week salary was not an in­ducement. Welles’s radio voice already earned him a thousand dollars a week, much of which he spent on the production.) After mounting two newly commissioned plays by African Americans, the Negro Theatre Unit was looking to produce a “classical” play with a black cast. Welles’s concept—which he credited to his wife Virginia—was to move Macbeth from medieval Scotland to nineteenth-century Haiti and the court of Henri Christophe (1767?–1820), the former slave who proclaimed himself “King Henry I.” Key to the transposition, as Welles put it at the time, was that “the witch element in the play falls beautifully into the supernatural atmosphere of Haitian voodoo.” If few of the available black actors had experience with blank verse, that was all the better to Welles, who, throughout his career, made Shakespeare less highbrow, often by way of massive textual changes. After a long four-month rehearsal, Macbeth opened at the Lafayette Theater (7th Avenue at 133rd Street) on April 14, 1936.

Captured on film are the production’s final minutes: the arrival of the conquering army disguised as “Birnam Wood,” Macbeth’s death at the hands of Macduff, and “th’ usurper’s cursèd head” mounted “upon a pole.” The narrator of We Work Again could not be more wrong in telling us that “every line in the play has remained intact.” For those who know Shakespeare’s text well, the concluding moment is jolting. Welles brings back a character often cut altogether, the witch queen Hecate, transforms her into a man (played by Eric Burroughs), and gives him a final line—taken from the first act—reaffirming the witches’ power: “The charm’s wound up!” Welles’s version thus ends not with the reestablishment of political order but with the return of repressed instincts. Macbeth is played by six-feet-four-inch Jack Carter, who had experience on Broadway in Porgy... and experience in jail for murder. “The end, which is always somewhat confused,” Jean Cocteau commented after seeing the production, is transformed “into a superb ballet of ruin and death.”

Some mainstream reviewers carped about Welles’s alterations of Shakespeare, or chided the black voices for lacking “poetry.” However, even Brooks Atkinson in the New York Times conceded that “as an experiment in Afro-American showmanship the Macbeth merited the excitement that rocked the Lafayette last night. If it is witches you want, Harlem knows how to overwhelm you with their fury and phantom splendor.” Black reviewers saw something more, an African American–cast play that was neither stereotypical “folklore” nor a slick musical: Roi Ottley in Harlem’s Amsterdam News wrote, “In Macbeth the negro has been given an opportunity to discard the bandana and burnt-cork casting to play a universal character.” The play sold out its sixty-four-perfomance Harlem run (during which Welles reached voting age), with seats given away for each Monday’s performance on presentation of relief cards. Maurice Ellis, seen here as Macduff, took over the title role when the production went on national tour—overcoming the challenges facing a 110-member African American company moving through segregated cities. —Scott Simmon

Further Reading and Viewing
The fullest account of the production is in Simon Callow’s Orson Welles: The Road to Xanadu (Viking Press, 1995). The footage that Welles shot the following year for Mercury Theatre’s production of Too Much Johnson (1938) can be viewed on the NFPF’s website here.