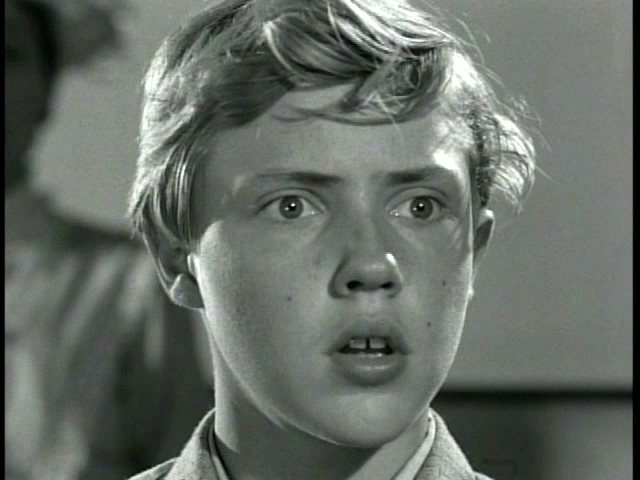 “You must tell Ernest not to stare at people,” hisses the father of an adolescent boy to his mother. The command is understandable if you know Ernest’s piercing stare belongs to a 14-year-old Christopher Walken. Billed as “Ronnie,” Walken plays the title character, who has developed the ability to see through walls, much to the consternation of his stuffy Victorian parents. In this stultifying, bourgeois environment, the ability to see what people are secretly doing—and reveal the hypocrisy of supposedly upstanding citizens—is a dangerous one. Ernest’s parents take him to a wise but cynical doctor, who encourages Ernest tell “a lie in defense of truth.”

The force behind The Boy Who Saw Through was producer Mary Ellen Bute (1906–83), who had made her name as a pioneering experimental animator and director. Born in Houston, Texas, Bute had studied painting at the Philadelphia Academy of the Fine Arts, but was frustrated by its limits in expressing motion and time. After encountering Leon Theremin, inventor of the light organ, and Joseph Schillinger, a composer who applied mathematical concepts to music, she entered experimental film in 1934 “to express music in terms of light.” Crafting modernist abstract animations, often structured by mathematical formulae, Bute collaborated with commercial photographer Ted Nemeth, who became her cinematographer and then her husband. They supported their independent work, and raised two sons, with support from Nemeth’s work on commercials and educational and military training films.

Bute hit her stride in the 1940s, combining animation, program music, and special effects in works such as Polka Graph (1947), a visual translation of the graph pattern of a musical score, Color Rhapsodie (1948), and Pastorale (1953), whose swirling washes of color embody the music of Bach, as conducted by Leopold Stokowski. Her last experimental films, Abstronic (1952) and Mood Contrasts (1953), feature shapes patterned on an oscilloscope through mathematical models. In the words of Art Monthly, Bute was “the first woman artist to experiment with ‘absolute film,’ in the exploration of how to visualize sound.”

Bute’s move into narrative, live-action film production is less surprising if one considers her earlier persistence in screening her work in commercial venues. By 1935 her films were playing at Radio City Music Hall before Hollywood prestige features, and continued doing so into the 1950s. Working as her own theatrical distributor, Bute ensured that her films screened in as many film palaces as film festivals. In the late 1950s, she repurposed her work for use in the Steve Allen Show and RCA Victor sales meetings.

In 1957 Bute was “overcome with a desire to do a movie with a ‘live’ cast.” Recalling a satirical short story she’d enjoyed in Harper’s Bazaar, she enticed Guy Glover—a future producer at the Canadian Film Board—to adapt “The Boy Who Saw Through.” She then decided on a director: George C. Stoney, an experienced maker of educational films whose documentary All My Babies: A Midwife’s Own Story (1953) was inducted into the National Film Registry in 2002. Filming took place in Hempstead and Old Brookville, New York. Ted Nemeth, as usual, handled the photography. Star Christopher (birth name Ronald) Walken was a busy child actor often seen on TV.

The Boy Who Saw Through proved a useful test-run for Bute’s next live-action effort: the feature film Passages from Finnegan’s Wake (1965, also preserved by Yale through an NFPF grant). Directed and produced by Bute, Passages won a prize at the 1966 Cannes Film Festival and stateside critical praise for making a charming film from a notoriously difficult source text. Bute never made her next planned film, an adaptation of Walt Whitman’s writings, but the rediscovery of her work in the late 1970s undoubtedly pleased this tenacious, versatile artist.

About the Preservation
Mary Bute’s papers and films, including the 35mm negative and soundtrack of The Boy Who Saw Through, were donated to the Yale Film Archive in 1985. From these Yale supervised the creation of a composite fine grain master and release print by Cineric, Inc. Lab work was funded by an NFPF Preservation Grant.

Further Reading and Viewing
Mary Ellen Bute’s life and work are examined by Lauren Rabinowitz in chapter 13 of Lovers of Cinema: The First American Film Avant-Garde, 1919–1945 (University of Wisconsin Press, 1995). The Center for Visual Music also maintains a research website on Bute and has made Polka Graph and Abstronic available on the DVD Visual Music from the CVM Archive, 1947–1986 (Center for Visual Music, 2017). Two of her films have been released on the Blu-ray set Early Women Filmmakers: An International Anthology (Flicker Alley, 2017).

About the Archive
The Yale Film Archive is home to a collection of more than 6,000 films on 35mm and 16mm and serves as an archive, study collection, library, and center for screening and research. The collection’s strengths are African-American cinema, newsreels, silent comedies, and documentaries. It also includes original materials on films made by Yale students and alumni, as well as documentaries about the university. The center runs a free, year-round screening program featuring prints from its collection and supports a variety of local and regional screenings. Since 2008 it has preserved 11 titles through NFPF grants, the most recent being Street Corner Stories (1977), a documentary by Warrington Hudlin.