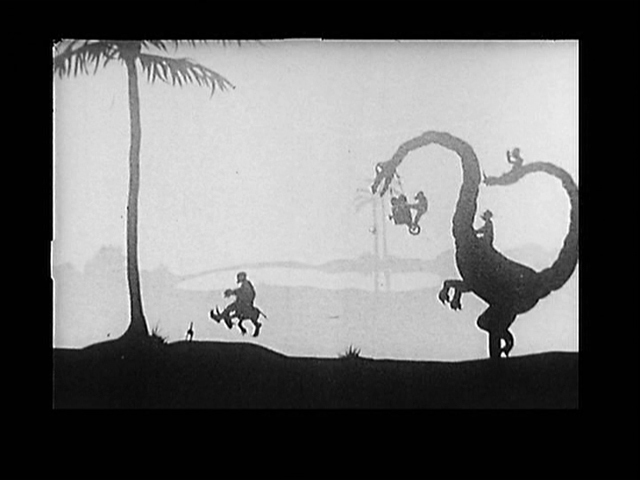 The Original Movie is a satire about the birth of moviemaking whose shad­owgraph style harks back to the origins of cinema in magic-lantern entertainments. “This is the way everyone believes motion pictures were first made,” the cartoon’s first intertitle jokes about Eadweard Muybridge’s pre-cinematic 1870s experiments photographing horses in motion.

Released in April 1922, The Original Movie is an episode in the distinctive animated series Tony Sarg’s Almanac (1921–23). Born in Guate­mala in 1880 of German and British parents, Tony Sarg became America’s most influential puppe­teer, whose elaborate marionette shows toured nationally in the 1920s and 1930s. His best-known creations, however, were balloons first devised for Macy’s 1928 Thanksgiving Parade: the helium-filled, rubberized-silk animals, which he thought of as huge upside-down marionettes, controlled by strings from below.

As with all the episodes in the Almanac series, The Original Movie tracks the origins of modern life back to some Stone Age, a proto-Flintstones world filled with Rube Goldberg–style mechanisms. Sarg, not previously a filmmaker, teamed for this series with Herbert Dawley, who in 1919 produced films featuring clay-animated dinosaurs by Willis O’Brien (later the creator of “King Kong”). If Dawley brought the con­cept of a prehistoric world to the series, Sarg honed the silhouette style, most familiar from Lotte Reiniger’s German films and known earlier through a U.S. film series called Silhouette Fantasies (1915–16). Sarg himself traced it back to Chinese shadow puppetry.

It’s a mark of how quickly the division-of-labor production system overtook Hollywood that already in 1922 The Original Movie can find its satiric “moral” in the inability of writers to recognize their work by the time it reaches the screen. The puritan-cloaked censors who contribute to the caveman filmmaker’s breakdown would have been on everyone’s mind. The Fatty Arbuckle scandal broke in 1921, and that year brought New York’s new censor board as well as a hundred bills in state legislatures to curb perceived Hollywood excess.—Scott Simmon

About the Music
Much wonderful music has been written for sound cartoons, from the late twenties on, as begun by the first master of the genre, Carl Stalling. Stalling’s scores were largely based on the method of parody-pastiche. He learned this method firsthand during the twenties, when it was applied across the board to all types of silent comedies, from shorts to features, both animated and live action. He then took the method to its acme, inspiring me as I played for this film. (Stalling’s music can be heard on Private Snafu: “Spies”.)

I used fourteen pieces for The Original Movie, but to list them all here would please only pedants, besides giving away some small musical jokes. One now unfamiliar piece does deserve mention: a screwy yet ingenious rag by Sydney H. Russell, “Too Much Raspberry” (1916). It can be heard at length early in the film, during the scenes of the be­leaguered director at work in his office (aided by his goat). For the rest, listeners may be able to detect bits of Grieg, Mozart, Stravinsky, Men­delssohn, and Gounod, along with a host of less eminent silent-film chestnuts. In short, my approach was anything but “original,” but I hope it adds to the fun and fluency of this fine, fleet film.—Martin Marks

About the Preservation
Three of the seventeen episodes in Tony Sarg’s Almanac are known to survive. The Academy Film Archive’s 35mm print of The Original Movie was preserved from a 28mm diacetate print by Kemp Niver (the film preservation pioneer also responsible for converting the first Library of Congress “paper prints” back onto film). Diacetate film is nonflammable, and the 28mm gauge was used where professional projectionists and fireproof booths for nitrate film were unavailable.

Further Reading and Viewing
On the origins of animated film, especially in the United States, see Donald Crafton’s Before Mickey: The Animated Film, 1898–1928 (MIT Press, 1982). Another episode of Tony Sarg’s Almanac, titled The First Circus (1921), is among the films preserved by the Library of Congress that can be downloaded or streamed from its Origins of American Animation website.