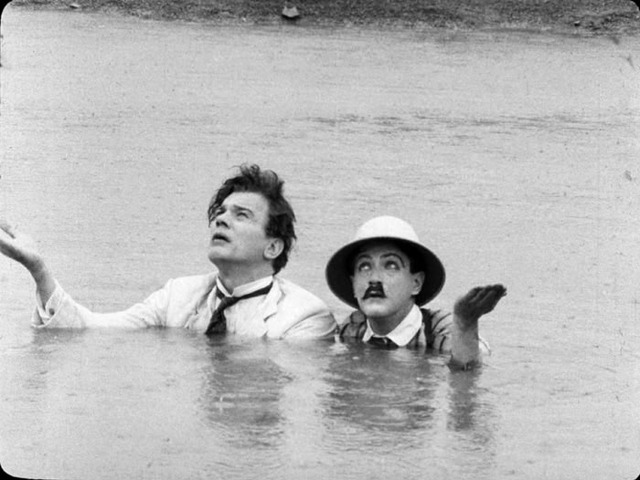 To download a copy of the film (mp4, 552 MB), right-click HERE and save to computer.

Too Much Johnson: The Films Reimagined

This 2014 edit of the Too Much Johnson work print is one rough guess at how the three films—the short silent movies intended to precede each act of the 1938 stage production—might have looked if Orson Welles and his Mercury Theatre colleagues had completed them.

Still, if this edit is only a guess, it strives to be an educated one, informed by research into the unpublished play scripts left behind by Welles and the Mercury Theatre company. As described in the note accompanying the work print, Welles pared down William Gillette’s 1894 play to not much more than an hour of stage time, with the goal of creating a breakneck multimedia farce. That film-and-stage project never quite came together. The play previewed in Connecticut before the films were finished, and on its own the cut-down play proved unimpressive.

When one views the surviving footage, however, it’s hard not to be struck with a sense that wonderfully lively films are buried there, yearning to be freed. That is the justification for this edit. Of course, there are any number of ways that the films might now be pulled together from the partially edited footage. It’s worth setting out a few notes about what was done here.

Editing Choices
This edit uses slightly less than half the surviving footage. (Of the 66 minutes, it uses about 30, with new intertitles bringing it to about 34.) It’s likely that Welles intended to shoot a few more scenes, or that reels were lost in the intervening 75 years. Not found among the footage, for instance, were shots Welles described decades later of a small-scale model of the Cuban plantation, intended for the second film, before act 2.

The surviving footage suggests that Welles found time to complete a relatively polished edit of the first four sequences (together running about seven minutes), which rapidly introduce the situations and all the principal characters (except the Cuban planter, Johnson), and likewise to prepare a nearly finished edit of the two-minute sequence in which Dathis (Edgar Barrier) hunts for his wife’s lover, Billings (Joseph Cotten), at a Manhattan suffragette march. These sequences are incorporated in this version with only slight trimming.

The rest of the original footage was found as an assemblage: many takes of the same scenes along with a few obvious outtakes but ordered to the extent that footage for each of the three films is together. (Material for the first film was found spread over eight reels of varying lengths; that for the other two was on one reel each.) Because nothing survives among Welles’s papers of any film script or treatment—and he reportedly worked without one—the intended order of individual shots and the placement of the episodes themselves is certainly debatable. Within the first film, for instance, one might well position the hat-knocking scenes or the suffragette march somewhere else. On the other hand, with some sequences it is relatively clear where most shots fit together, even when they require a full reedit, as with the conclusion of the first film, when everyone arrives dockside and races aboard the ship bound for Cuba.

For the chase across lower Manhattan, through the market and over the rooftops, there’s little doubt that any final cut would have been tighter and shorter than this one. But the shots are so breathtaking that it seemed better for this presentation to savor as many as the storyline would allow. Indeed, one comes away from the rooftop chase amazed that Joseph Cotten survived to make another movie. Welles said that his inspiration here came from Harold Lloyd’s Safety Last (1923), but we know now that Lloyd mixed photographic tricks with studio shots to achieve his skyscraper acrobatics. The actors in Too Much Johnson were clearly working without nets, as they say, and Welles evidently took Lloyd’s title literally! In this edit, I’ve made Cotten’s most miraculous balancing act, atop a chimney, the climactic second-to-last shot of the rooftop chase. As Dathis, Edgar Barrier sensibly scrambles with more caution. If you look at background skyscraper windows, you’ll spot Manhattanites also amazed at the goings-on.

This edit is only a rearrangement and trimming of shots, without attempts to imitate what might have been Welles’s editing style. The footage in any case suggests that he was playing with the fullest range of editing approaches: from rapid montage to extended-take jokes. For instance, the opening tussle of Faddish with his daughter and her boyfriend relies on quick cutting, in contrast to such shots as the 80-second chase across the horizon in the third film or the 30-second four-sided chase (Billings, Dathis, cops, and cart driver) through the market in the first film. (In both those shots, incidentally, the witty extended takes are created through a series of hidden cuts in the original footage, carried over to this version.)

New Intertitles
The intertitles added here are primarily informational: filling in story background so that the films make some sense without the accompanying play. Welles mentioned in a later interview that he had planned to write intertitles for the films, but it’s likely that this was among the many tasks left undone. If he did draft intertitle texts, they don’t survive among his papers at Indiana University or the University of Michigan.

Along with the informational titles, I’ve added three for dialogue: The first (“My husband!”) is clearly mouthed by Arlene Francis (as Clairette Dathis) and echoed by Joseph Cotten (as Billings) as their characters are awakened in bed. The text for the other two dialogue intertitles, both spoken by Dathis, repeat his lines in the Mercury Theatre’s version of the play.

The Three Films
In both the work print and this edit the first film is more than twice as long as the other two combined. To some extent this corresponds to revisions in the Mercury play script (which cuts Gillette’s acts 2 and 3 to less than half their original lengths), but one also suspects that Welles’s interest—or the available shooting days—favored opportunities offered by the Manhattan locations for the first film over the Hudson River–side locations for the Cuban setting of the others. (Welles is seen directing the third film in a home movie preserved at the Pacific Film Archive; excerpts are viewable here on the National Film Preservation Foundation’s website.)

The sequencing of shots in the second and third films is even more uncertain, but because less original footage survives for each, the choices are also simpler. The film before act 2 is little more than an arrival in Cuba, with Billings, Dathis, and Johnson making their separate ways from the harbor to Johnson’s ranch. Near this film’s start is a graveyard scene: Mercury’s adaptation kills off Billings’s old friend Billy Lounsberry, whose ranch, Billings later learns, is now owned by the real Johnson. (In Gillette’s play Lounsberry has merely sold out and moved to New Orleans.) Laying the wreath on Lounsberry’s grave is his devoted assistant Frederick—self-described in the Mercury play script as now Johnson’s “slave”—played by Erskine Sanford (soon to be memorable in Citizen Kane as the Inquirer’s blustering initial editor, Mr. Carter). One unexplained detail in this second film: Billings rides a white horse to the ranch while the other two walk. From both versions of the play, we know that the white horse belongs to Johnson. My suspicion is that the planned Mercury film version may have involved Billings taking—or stealing—Johnson’s horse at the docks so that he could reach the ranch ahead of the others. This would also help explain why Johnson is looking so put out and winded as he walks back home and would further justify his sour demeanor when he first comes onstage, in act 2. All of this presumably would have been clarified in intertitles. It also helps to know that in both the Gillette and Mercury versions of act 1, Billings slashes off some of his hair, so that by this act 2 film his haircut ostensibly no longer matches the torn photo that Dathis brandishes so obsessively in the first film in his search for his wife’s lover.

It may be that the third film was intended to follow act 2 without pausing for intermission, because the film’s action proceeds directly from that act’s last lines, when Dathis slaps Johnson and demands a fight. Among the puzzling details in this final film: It’s evident that Billings attempts to stop their swordfight by showing them a piece of paper, but whether this is a photograph or some document is unclear. Again, an intertitle would presumably have sorted that out.

This reimagining of the Too Much Johnson films is necessarily only one guess among many. Now that the work print is available for streaming and downloading, let’s hope that other reconstructions will follow and inspire a staging of the Mercury Theatre’s 1938 multimedia production.—Scott Simmon

Scott Simmon is Professor of English at the University of California, Davis, and curator of five of the National Film Preservation Foundation’s DVD anthologies, most recently Lost and Found: American Treasures from the New Zealand Film Archive. Also for the NFPF is his 2012 article “Let There Be Light (1946) and Its Restoration.” His books include The Films of D.W. Griffith and The Invention of the Western Film.