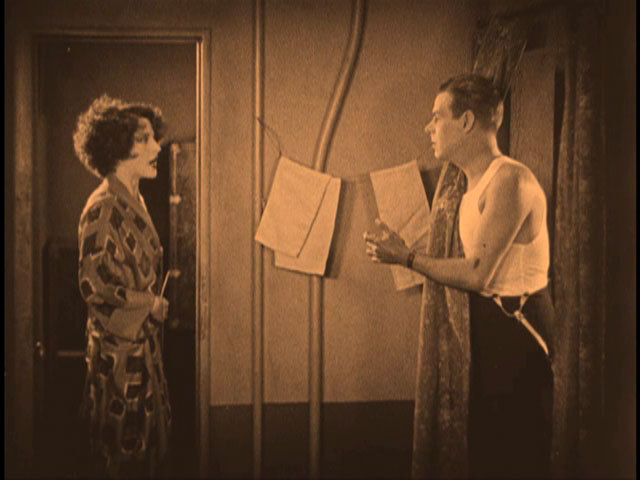 For some viewers, a movie without previews doesn’t seem complete—like dinner without appetizers. These days, trailers are often watched à la carte, with the biggest venue for coming attractions now being the Internet. But their importance as advertising remains just as strong as ever. In fact, Hollywood Reporter has a regular column reporting on YouTube’s top-10 trailers.

Back in the silent era, coming attractions were first advertised with static slides. During the mid-1910s moving trailers started to appear. In a 1916 Motography article about the new practice, the president of Triangle Film Corporation heralded its importance for the industry: “We realized that the screen itself is a most powerful advertising medium, and one that was not being taken full advantage.” As the practice evolved, trade magazines began to include advice in their reviews about how to use trailers to exploit the film’s box office potential.

There also arose companies such as National Screen Service and Advance Trailer Service, which specialized in creating “intimate, snappy and interesting” previews instead of “random shots” thrown together. Most of the studios ended up contracting their services, but some like M-G-M continued to produce their own trailers.

This M-G-M preview for Upstage (1926) is typical of its time, with catchy taglines and animated lettering. An illustrated title announces “The heroic story of a girl with grit! who came to New York – on her nerve – and kept it!”, then proceeds to show some of the film’s attractions, including glimpses of the backstage vaudeville milieu, Norma Shearer’s extravagant gowns, and the climactic knife-throwing scene.

Shearer plays a young woman, newly graduated from a secretarial school in Bangor, Maine, who strikes out on her own in the Big Apple. Applying for a stenographer position at a talent agency, she ends up being recruited instead as the partner of a song-and-dance man played by popular Broadway musical star Oscar Shaw. A positive review in Variety swells her head and she suddenly thinks she’s a big star only to find out the hard way that she’s still a freshman on the vaudeville stage.

The film was directed by Monta Bell, whose off-screen relationship with Shearer led to an exceptional group of films, compared by film critic Mick LaSalle to the work of Josef von Sternberg and Marlene Dietrich.

Luckily, we don’t have to content ourselves with just this trailer. Upstage survives as a complete feature thanks to the pioneering film preservation efforts of M-G-M and is occasionally screened in festivals, archival programs, and on Turner Classic Movies.

About the Preservation
This trailer was preserved under the direction of George Eastman Museum from a 35mm tinted nitrate release print found at the New Zealand Film Archive. Work was completed in 2012 by Colorlab Corp. with support from Warner Bros.

Besides this trailer, another for the lost John Ford film Strong Boy (1929) was also brought back from New Zealand and is currently available on the Lost and Found: American Treasures from the New Zealand Film Archive DVD. More trailers for lost films can be found in the More Treasures from American Film Archives DVD set as well as on our website, where you can watch The Sin Woman (1922?) trailer rediscovered at The National Film and Sound Archive of Australia in 2008.