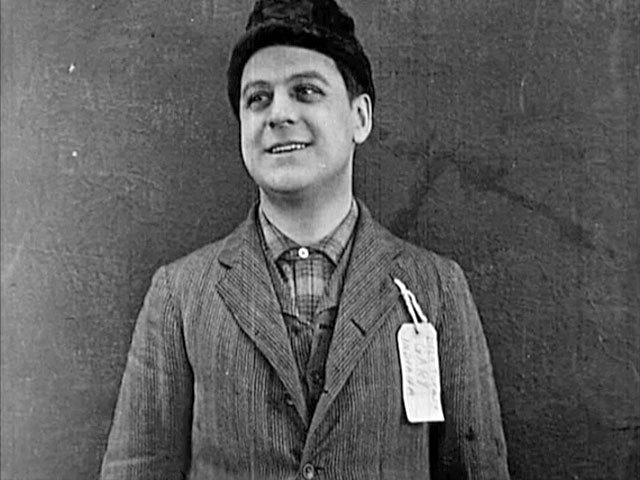 For information about accessing this film, please contact the National Archives.

“Every European liner that steams into New York Harbor brings in its steerage, Americans in the making”—so begins the National Association of Manufac­turers’ publicity for this revealing one-reeler, released in April 1913. An American in the Making seems, at first look, an unjustifiably odd mix: an industrial safety film surrounded by a story promoting citizenship for new immigrants. The latter genre is remembered now through such surviving films as Making an Amer­ican Citizen (directed about three months earlier by Alice Guy Blaché) and The Mak­ing of an American (1920; sponsored by the State of Connecticut).

An American in the Making opens with a rapid sketch of a real-life pattern: An eastern European peasant leaves his fields after receiving passage money from a relative already in America. By the next shot, he’s gazing out from the Ellis Island ferry at the Statue of Liberty. The imagery suggests “huddled masses yearn­ing to breathe free,” but the film was made partly because many single men came to America as temporary workers, expecting to endure the loneliness and working conditions for only a year or two. It’s revealing that the film chooses a Hungarian, a certain Bela Tokaji, as his Ellis Island tag reads. Hungarians migrated to America in large number (some 450,000 between the late 1890s and 1914), but many also returned home, and in the recession year of 1908 more Hungarians departed from America than arrived. Men thinking of leaving Hungary were issued booklets warning of hard times awaiting in the United States, and once here, immigrants would find newspaper notices placed by the Austro-Hungarian government: “Dear Countrymen: Do not forsake your home­land for always! When fate forces you to emigrate, at least do not sell your lands.” A Hungarian American song ran: “I boarded the ship on Tuesday morning / Going back to Hungary. / God bless America forever, / Just let me get away.”

An American in the Making was, it’s clear, entering into a debate. What brought its Americanization argument together with its safety demonstration was the interests of the film’s sponsor, the United States Steel Corporation. Although it can seem surprising now, American industries lobbied Congress for expanded immigration, just as labor unions called for restrictions, with both groups rightly seeing the new arrivals putting downward pressure on wages. According to the president of the Thanhouser Film Corporation, C.J. Hite, the film originated this way: “The United States Steel Corporation came to us and requested us to prepare a story in moving picture form, with the idea of circulating the same through our theatres, which would show the human side of this great company. They wanted to convey to the public in general that they had a heart.” There was a little more to it than that.

Founded in 1901, the U.S. Steel Corporation was by this time making more than half the nation’s steel. Its success had been built on replacing unionized craftsmen with low-wage unskilled laborers. A 1910 congressional investigation found that 40,000 U.S. Steel workers (almost half its employees) earned less than 18¢ an hour, with some 20,000 putting in 12-hour shifts. President Taft initiated an antitrust suit in 1911, which the company was still fighting. U.S. Steel thus had reasons to dramatize on film its safety measures and its concern for workmen. Muckraking articles had long focused on the dangers in the industry, notably Everybody’s Magazine’s 1907 “Making Steel and Killing Men,” which documented 46 deaths and some 2,000 injuries at U.S. Steel’s South Chicago plant over just the previous year. Had Bela been a real immigrant, he could have read in the Hungarian American newspaper Szabadság a regular feature titled Fatal Accidents and Mine Disasters. Indignation at U.S. Steel reached a height with another set of congressional hearings that concluded in 1912, just before the company approached Thanhouser about the film.

When Bela arrives in Gary, Indiana, “HIS BROTHER SHOWS HIM THE WORKINGMAN’S MODEL CITY,” an intertitle tells us. Named for himself by U.S. Steel’s president, Elbert H. Gary, the city had been built from the ground up in 1906 as the company’s “industrial utopia,” with its “model schools” and “company playgrounds” that Bela’s son will use. In a nice moment, Bela first heads for a saloon when he arrives in Gary, but his brother redirects him to the YMCA. At the time there was one saloon for every 100 inhabitants in Gary—most on “Whiskey Row”—and saloons everywhere were community centers for immigrant workers, mainly single men. The YMCA—promoted here as the sober alternative—had a cozy relationship with U.S. Steel, which paid for the impressive YMCA building displayed in the film. About one-quarter of steelworkers spoke no English, and the accident rate for non–English speakers was twice the rest of the labor force. U.S. Steel ran English classes in Gary, where we see Bela meet his future wife. (The actors—Harry Benham and Ethyle Cooke—were real-life husband-and-wife, and their seven-year-old son, Leland Benham, plays their movie son.) No English is needed for the “universal danger sign” that Bela’s brother shows him (a symbol that “promises to be as well known as the Red Cross in its field,” the National Association of Manufacturers claimed, but that is now forgotten).

An American in the Making was widely distributed to regular movie theaters and also screened for workers by the National Association of Manufacturers and later by the U.S. Bureau of Mines. The film’s assimilation fable evades a few things that would have been obvious to worker audiences. Bela’s living situation is not shown until he marries and apparently moves into the house of his Eng­lish teacher, but he would have lived in “the Patch,” the instant slum south of company-owned property where immigrants crowded. The film also hides its relationship to a new labor struggle centered on immigrant workers. Although U.S. Steel had essentially defeated its unions, declaring itself an open shop in 1909, the American Federation of Labor had started a campaign in August 1912, with brochures in 13 languages, to educate immigrant steelworkers about the power of collective bargaining. An American in the Making was part of U.S. Steel’s response.

It’s easy to find cynical corporate motivations for both the film’s safety prom­ises and its Americanization argument—and yet a core of something authentic and genuine remains. U.S. Steel kept ahead of workers’ compensation laws (passed in the majority of states between 1911 and 1914) and in the year of this film paid out $2.5 million in accident claims under its internal policy. The company’s Committee of Safety pioneered many of the now-familiar devices displayed in the film, and serious accidents in company plants declined 43 percent between 1908 and 1912. What we see is part of a nationwide “safety movement,” one of the final expressions of the Progressive Era’s reformist optimism about improving the world (as also seen in The Cost of Carelessness). Similarly, however idealized is the family happiness at the film’s close, with its integration of the immigrant with a native-born wife, steelworkers from Euro­pean peasant backgrounds were genuinely surprised by the relative fluidity of class boundaries in the United States. Unskilled immigrants also regularly rose through the ranks in the steel industry, as does Bela in the film. This is, how­ever, the end of an era. The following year World War I brought a halt to European, particularly eastern European, travel. Bela had come with the last tide to America. —Scott Simmon

About the Music
From the title, this short narrative would seem to be an immigrant’s tale, a chronicle of an individual’s brave journey to a new land and struggle for a better life. This is a great story, and most of us have at least one ancestor who lived it. I came to realize, however, that An American in the Making uses this low-key, everyman’s story to bookend a more central purpose: to showcase the safety practices of the steel industry. The key melting pot in this film is the one shown on the factory floor.

Thus the score underplays the edges and gives the major oomph to the middle. From “Yankee Doodle” for the opening title I move to a Polish dance by E. Mlynarski (from Erno Rapée’s Motion Picture Moods, G. Schirmer, 1924) for the peasant’s farewell, to “America” for the shipboard scene, and to the bustling “Polka Intermezzo” by Ernst Luz and W. Hauenschild (no. 20 in A.B.C. Dra­matic Set, Photoplay Music, 1916) for his arrival in New York. John Philip Sousa’s “Hands across the Sea” (1899) carries the action vigorously from the YMCA scenes to the point where the film begins its safety lessons. For this high purpose the music embraces opera. The workmen with hammers receive Verdi’s “Anvil Chorus” (originally sung by anvil-pounding Gypsies in Il trovatore, 1852), and the “muscular” quality of the improvisation grows stronger with each piece of heroic machinery. Eventually, for contrast, the score switches to a graceful waltz by Charles Gounod (from the ballet for his 1859 opera Faust) for the escalating parade of safety devices—drill press guard, circular saw, chip guard, emery wheel, and belt and pulley. Following the dramatic music accompanying the blast furnaces, the score finally relaxes into easygoing “American” pieces: “When I Get You Alone Tonight” (words by Joe McCarthy and Joe Goodwin, music by Fred Fisher; Leo Feist, 1912) for the romance, a rag for the family dinner table, and a reprise of “Yankee Doodle” near the end. Our hero’s story may not be the stuff of high drama, but it ends in the happy American way. —Martin Marks

About the Preservation
A new 35mm copy of An American in the Making was generously produced for this DVD project by Colorlab.

Further Viewing
A wide selection of Thanhouser films, released between 1911 and 1917, have been made available on DVD by the nonprofit Thanhouser Company Film Preservation Inc. The two other silent films mentioned above that explore immigration and assimilation are available on DVD: Making an American Citizen (1912) in The Movies Begin (Kino) and The Making of an American (1920) from Northeast Historic Film (www.oldfilm.org).