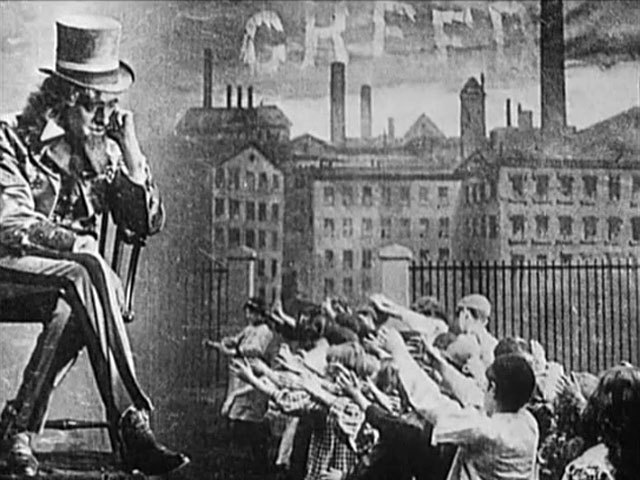 In what a review called the “fittingly symbolical” opening of Children Who Labor, a crowd of faceless children trudging to a factory raise their arms beseechingly to the looming figure of Uncle Sam, who turns to gaze down on them impassively. Above the factory, smoke in the dark sky forms the word GREED.

One of the ongoing surprises of American silent film is how numerous and varied in political viewpoints were early social-issue dramas, which took on topics later forbidden in Hollywood. Movies in the early 1910s appealed to working­-class audiences and at the same time showed progressive critics how the nickelodeon product could provide social “uplift.”

The Edison company would regularly collaborate with nonprofit welfare organizations on one-reelers, including several with the American Red Cross. Children Who Labor was a collaboration with the National Child Labor Committee, the nonprofit organization founded in 1904 and chartered by Congress to promote the rights of “children and youth as they relate to work and working.” The official statistic from the 1910 census was that 18 percent of U.S. children between the ages of ten and fourteen were “gainfully” employed, but the true number, especially in textile mill regions, was higher. To convey conditions under which children worked, the NCLC pioneered mass mailings and photo documentation, most famously seen in Lewis Hine’s investigations. Movies were a logical extension.

Children Who Labor was directed by the openly radical Ashley Miller and written by his wife, the actress Ethel Browning. Its political argument is hung on a credibility-straining family melodrama featuring an industrialist who shuns photographic evidence put before him by an NCLC investigator (who is unobtrusively gathering information at the far left in the opening shot). The industrialist’s wife, by contrast, is shocked and sympathetic. When their young daughter gets lost during a train trip through a factory town (the location was Paterson, New Jersey), she’s taken in by an immigrant family—probably meant to be Italian—that has found mill work only for their elder daughter. The lost child too joins the workforce, and “fate” leads the industrialist, after he buys the mill, to unknowingly become his daughter’s employer.

Moving Picture World raved of the film: “Sincerity glows in every one of its scenes…. This reviewer has heard audiences receive good pictures before, but he has never heard the applause that this picture got.” The New York Dramatic Mirror, however, complained of the logic: “How the child, apparently ten or twelve years old and obviously not dumb, could have failed to make people know who she was is past comprehension. It is presumed that the foreigners could not understand her, but they had no apparent difficulty talking with her father later on.” Plot implausibilities notwithstanding, the film makes the political argument that adult labor competes with child labor, which itself depresses wages. Surprising moments include harassment by the foreman even of the preteen girl, after she goes to work in the mill. When the situation is sorted out, and the mill owner retrieves his daughter from the immigrants’ home, he’s quick to offer them a few dollars—but no one lets him off that easily. His daughter upbraids him for the family’s living conditions, and the unemployed father asks instead for work. (The poor and rich daughters are played by sisters, who had major careers under the names Viola Dana and Shirley Mason.)

Two months later, in April 1912, came the Thanhouser company’s darker family melodrama of labor conditions, The Cry of the Children, shot partly in an actual textile mill. It’s again the suffering of a young girl that most calls for reform. The 1912 Democratic candidate for president, Woodrow Wilson, mentioned the Thanhouser film as illustration of Taft administra­tion failures, implying rightly that the National Child Labor bill signed by President Taft that month was toothless in creating a federal bureau with investigative powers only.

Children Who Labor ends by returning to children beseeching Uncle Sam, GREED still wafting in the sky. The image seems to say that, notwithstanding one employer’s change of heart—which leads to the immigrants’ children carrying schoolbooks past the factory gate—the national problem remains. Uncle Sam looks only marginally more interested in the children than he was in the opening shot. This perhaps reflects the National Child Labor Committee’s sense in 1912 that meaningful child labor laws at the national level were difficult to sustain (and the key ones were subsequently overturned by the Supreme Court). After winning the presidency, Wilson too refused to support the child labor bill drafted by the NCLC. Thus the committee worked more successfully to pass laws in state legislatures.

The Edison company no doubt saw commercial opportunity, more than social commitment, in its collaborations with welfare organizations. Such is suggested by another of its 1912 one-reelers, The Crime of Carelessness, which used some of the same cast members, this time in a collaboration with the National Association of Manufacturers, which regularly lobbied against child labor bills. In this fictionalized docudrama about the 1911 Triangle Shirtwaist fire (in which 146 textile workers, mainly women, died, primarily because of locked fire doors), the factory owner accepts some blame, but the man responsible for the fire, after ignoring the owner’s warnings against careless smoking, is a worker. —Scott Simmon

About the Music
Children Who Labor is a tragic melodrama with a happy resolution, and by 1912 there were many sensitive pianists across America who would have played some of the same dark pieces I have woven together here. With the exception of an achingly sad theme from a Schubert piano sonata (which underscores two scenes near the end), all the selections come from early publications intended for movie pianists. The oldest of these is Emerson’s Moving Picture Folio; Containing: Waltzes, Operatic, Melodramatic, National Airs, Sacred Melodies, Overtures and all Music Needed for any Moving Picture (1913). Appearing so close in time to Children Who Labor, the anthology’s repertoire is comparably direct and powerful. The most crucial piece I took from it is the so-called “Miserere” music, extracted from act 4 of Verdi’s Il Trovatore (1852). I play it first under the opening scenes, which show the film’s two families, and rework the most lyrical portion at the climax, when the industrialist succumbs to the pleas of the unemployed worker and then to those of his daughter. For the film’s symbolic opening and closing shots, I used another piece from the Emerson Folio, a somber funeral march titled “Elberon to Washington.” The composer was Almon D. Hougas, who wrote it in 1882 as a memorial to President James Garfield. (Garfield died in 1881, while trying to recuperate from an assassin’s bullet.) As it happens, Garfield was one of the first post-Reconstruction presidents to achieve serious political reform. The link, though coincidental, gives an added layer of meaning to this reform-minded film. —Martin Marks

About the Preservation
Children Who Labor was preserved by the Museum of Modern Art from the original nitrate negative, which includes a few frames (known as “flash frames”) from each intertitle. These were printed to normal duration in MoMA’s preservation version. A new 35mm viewing print was struck in 2003 with the support of the National Film Preservation Foundation.

Edison’s assembly sheet—a single-page postproduction script—for Children Who Labor is reproduced in Eileen Bowser’s essential history of American film in this era, The Transformation of Cinema, 1907–1915 (University of California Press, 1990).

For a pioneering exploration of labor and political filmmaking in the silent era, see Working-Class Hollywood: Silent Film and the Shaping of Class in America (Princeton University Press, 1998), by Steven J. Ross.

Two related 1912 films preserved by George Eastman Museum are available on DVD: The Cry of the Children is included in Thanhouser Classics (available from Thanhouser Company Film Preservation Inc.); The Land Beyond the Sunset, an Edison one-reeler made in collaboration with the Fresh Air Fund, is in the Treasures from American Film Archives DVD anthology.