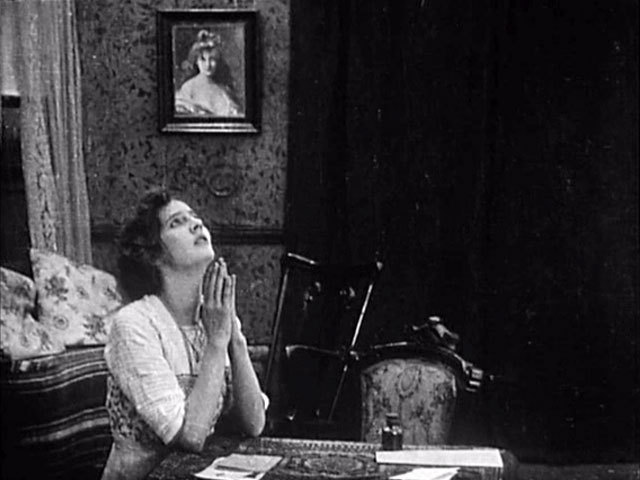 Hope opens with a small-town banker laughing off a solicitation letter from the National Association for the Study and Prevention of Tuberculosis. His response letter reads, “This is a country town. We don’t have consumption here and therefore do not need a sanatorium.”

When the film was made in 1912, tuberculosis was still the leading cause of death in the United States, as it had been throughout most of the nineteenth century. Known familiarly as consumption, for the wasting weight loss that followed initial bouts of coughing, the frightening disease was finally traced in 1882 to the tubercle bacillus. Although the death rate from TB had been declining even before then, urbanization and workplace changes at the start of the twentieth century conspired to make the disease more of a social problem. Once TB was identified as a bacterial contagion, sweatshops and urban tenements crowded with new immigrants were recognized as breeding grounds, and polluting smoke from factories was understood as increasing susceptibility. The popular thought was that tuberculosis was a “city disease”—and that the more affluent living in small towns needn’t worry overmuch about it. (The parallel today would be with AIDS as a “gay disease.”)

The challenge for this little one-reel melodrama was first, as suggested by its title, to argue that things weren’t hopeless for those contracting the disease and then, more surprisingly, to reverse presumptions about the disease and cities. Sponsored by the National Association for the Study and Prevention of Tuberculosis—the organization that solicits the fictional, small-town banker—Hope is another in the series of collaborations between nonprofit groups and the Edison company (see The Usurer’s Grip). Founded in 1904, the association (which simplified its name by 1920 to the National Tuberculosis Association and is now the American Lung Association) was the first large volunteer organization dedicated to combating a single disease. In turning to movies in 1910 to promote its cause, the association took the position that “a story is fundamental to the motion picture scenario, since the dry details of taking the cure…are hardly of sufficient interest to arouse the enthusiasm of the million people who visit the motion pictures every day.” To write the story for Hope it enlisted a former settlement-house worker for the urban poor, James Oppenheim (1882–1932), remembered now for editing the literary journal Seven Arts and known in 1912 for his poem “Bread and Roses,” which had been adopted as a slogan earlier that year by the striking textile workers of Lawrence, Massachusetts. Oppenheim’s scenario rests on the character type who is usually struck by the disease in previous movie stories about tuberculosis: a beautiful young woman (see, for instance, Alice Guy Blaché’s Falling Leaves, from earlier in 1912). Here Edith (Gertrude McCoy), the banker’s fiancée and the daughter of one of his clerks, develops what she takes for a cold until she gets the diagnosis from the local doctor. In a plot twist that would have been seen as grimly ironic, she must secretly leave Palmer, New York (a small town 50 miles north of Albany), for Manhattan’s East Side to get treatment at Bellevue Hospital—the implicit argument being that the specialist medical facilities at Bellevue (the nation’s oldest public hospital) more than compensate for the dangers of the city environment. Still, the strikingly dark shot of Edith alone in her sparsely furnished New York apartment reinforces the need for a sanatorium back home. (The first U.S. tubercular sanatorium was established only in 1885, the result of two clinical understandings following the discovery of the bacillus: that the contagion was preventable by separating the afflicted and that if caught early, the disease was curable with therapeutic rest. Not until the 1940s would antibiotic treatments be discovered.)

Edison’s films with the National Association for the Study and Prevention of Tuberculosis had become “an annual holiday feature.” Hope was the third of six one-reelers, released each November or December from 1910 through 1915 and tied to Christmas Seal campaigns. Arguably the most successful public health fund-raising promotion of all time, Christmas Seals had been introduced modestly in the United States in 1907, with 30,000 of the adhesive stamps, emblazoned with the double-barred-cross emblem of the tuberculosis fight, selling for a penny each, and intended for holiday envelopes. During the 1910s, Christmas Seal campaigns were collaborations between the tuberculosis association and the American National Red Cross, which split the proceeds. The initial film in the series, the now-lost Red Cross Seal (1910), told of a tenement girl who ekes out her living decorating lamp shades but who wins the $100 prize for designing that year’s Christmas Seal—money that she then gives to the consumptive boy across the hall to pay for his treatment at a sanatorium. Hope was released to theaters on November 16, two days before release of the 3 million 1912 stamps.

These collaborations by Edison and the tuberculosis association were probably the first film series produced for health education. They achieved the association’s goal of presenting “the anti-tuberculosis movement in a dramatic and interesting manner” and were popular in commercial film theaters. “If our audiences are being educated they at least are not made aware of it,” one exhibitor commented after showing The Red Cross Seal. The association estimated that “no less than ten million people” across the United States and Canada would see Hope in theaters, but the sponsor also experimented with other venues. Although attempts to screen the film in Los Angeles public schools seem to have been blocked by Christian Scientists, the association organized a series of free summer outdoor screenings in New York parks in collaboration with the city health department. In late June and early July of 1913 audiences of up to 10,000 on Manhattan’s Lower East Side watched Hope and the earlier Edison TB films projected onto the sides of apartments and tenements. —Scott Simmon

About the Music
Of the three reform-minded films produced by the Edison company in 1912 that are included in this anthology, Hope—A Red Cross Seal Story is the most direct in proclaiming its message. Hope is also the most relaxed in pacing and the simplest in story. The dramatic focus rarely strays from the protagonist, Edith, who learns to come to terms with her disease. (No melodramatic villain here: The unseen enemy is the tubercle bacillus.) So I approached this score differently from the other two. Instead of using terse motives to drive the music forward, I laid out more lyrical music scene by scene, with accents on pathos and romance.

In the first two minutes, during the titles and the scene at the bank, I play Felix Mendelssohn’s Song without Words in E Major, op. 30, no. 3 (1834). Mendelssohn’s Songs once were among the most frequently played pieces in the piano repertoire—this is especially so of the simpler ones, which often had nicknames and provided listeners with unambiguous emotional cues. The piece used here is indeed among the simplest, which is an essential part of its effect. Early on it acquired the apt nickname “Consola­tion.” The music begins with ascending, angelic, harp-like arpeggios and continues with a series of gentle hymn-like phrases. The opening arpeggios return at the end before the final cadences. This is music of both melancholy tenderness and quiet faith.

I used this piece at the beginning and repeated it twice. Mid-film, at the dramatic turning point when Edith anguishes alone in her room, she contemplates the necessity of leaving home (the intertitle reads “The Struggle”). For much of this segment I play the intense Romance in E Minor by Adolf Jensen. Suddenly Edith is blessed with a vision: On the curtain appears a sun-filled image taken from the Red Cross’s TB pamphlet, on which is emblazoned the word “HOPE.” After her vision fades, Edith kneels and raises her hands to pray. For this spiritual moment I break off the Jensen and recall the Mendelssohn. The piece is reprised at the end with images of the same Red Cross pamphlet, followed by Edith with her new husband and then a smiling Santa Claus.

Contributing to the drama are three pieces of different types:

1. Chopin’s Prelude in E Minor, op. 28, no. 4 (1839), which pianists always love to play, makes an effective counterforce to Mendelssohn’s music in the scene in which the doctor diagnoses Edith’s condition. Few musical laments are simpler in style, richer in chromatic harmony, or more charged with grief. There is also a connection to Hope’s theme, since Chopin himself died from tuberculosis.

2. When we glimpse the townspeople marching for a sanatorium in Edith’s hometown (the intertitle reads “The rousing of the people at home”), I represent the triumph after long struggle with the noble C major theme Brahms composed for the final movement of his first symphony (1876). The music reinforces the film’s newly confident mood while maintaining the score’s classical orientation.

3. For the Bellevue sequence, I opted for an American flavor, drawing on one of the best-known religious songs of the nineteenth century, “Whis­per­ing Hope,” originally published by Lee and Walker in 1868. This vocal duet by Septimus Winner (“Alice Hawthorne” is his pseudonym on the sheet music published in 1868) is written as a waltz and provides contrast to the rest of the score. “Whispering Hope” could easily have been played when the film was screened in 1912, with the words—from the first verse—unsung but widely known: “Soft as the voice of an angel, / Breathing a lesson unheard, / Hope with a gentle persuasion, / Whispers her comforting word.”

By such means the score strives to put a seal on Hope’s affirmation of the curative powers of both medical science and faith. —Martin Marks

About the Preservation
In 2006, Hope was preserved from the original negative by the Museum of Modern Art with funding from the National Endowment for the Arts and the Celeste Bartos Film Preservation Fund.

Further Viewing
Another film sponsored by the National Association for the Study and Preven­tion of Tuberculosis, The Lone Game, Edison’s 1915 Christmas Seal campaign film, can be seen in Edison: The Invention of the Movies (Kino/Museum of Mod­ern Art). Alice Guy Blaché’s 1912 tuberculosis drama Falling Leaves is presented on More Treasures from American Film Archives.