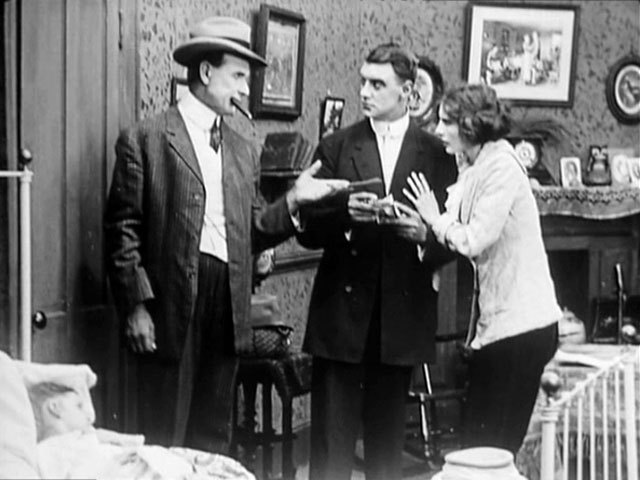 The optimism of the pre–World War I Progressive Era—when belief in reform of society’s ills through investigative research and government action was at its height—is given its most lively illustration in a fascinating series of films produced between 1910 and 1915 by the Edison company in collaboration with a wide range of enterprising nonprofit organizations. Each film dramatized—and resolved—a social problem within 15 minutes.

In The Usurer’s Grip, sponsored by the Russell Sage Foundation’s Division of Remedial Loans, a young New York City couple fall victim to a newspaper ad for quick cash through “private furniture loans.” They borrow $25—less the money the broker grabs back (“Do you think I work for my health?” he demands)—and find themselves owing $45 in six monthly payments of $7.50, notwithstanding the advertised rate of 6 percent. (All these figures can be hard to read on the film.) They fall behind on payments, the husband loses his initial job, and their furniture is being hauled off…when salvation arrives.

The film encapsulates real-world lending practices. Interest on household loans, secured by furniture and other property, was limited legally in New York and most of the nation to 6 percent annually, although virtually all such small loans were made at vastly higher rates, especially after “fees.” A New York survey in 1911, the year preceding the film, found that some 35 percent of workers in the city owed money to illegal lenders. As dramatized when the film’s female “bawler-out” harasses the clerk at work, employees were routinely fired if it became known that they were in trouble with lenders, especially as wages could be garnished even for illegally contracted debts.

“The loan shark evil” was thus a long-standing topic of muckraking journal­ism, peopled with real-life melodramas of “rapacious money lenders” and their “loan slave” victims. By far the most effective investigation was undertaken by the sponsor of this film, the Russell Sage Foundation, which, in a pattern exemplary of the Progressive Era, followed up its published studies—beginning with The Salary Loan Business (1908)—with lawsuits, proposed legislation, and the public information blitz of which this film was a part. The Usurer’s Grip illustrates the Russell Sage Foundation’s two-pronged “campaign against the loan shark,” as described by Arthur H. Ham, director of its Division of Remedial Loans and the film’s cowriter: putting the “leeches and remorseless extorters” out of business and setting up public-spirited alternatives.

The name given the film’s beset husband and father, “Thomas Jenks,” may be a nod to two of the New York Supreme Court justices—Edward B. Thomas and Almet Jenks—who had in March 1912 struck down “fees” above legal in­terest rates. As in the film (released seven months later), the case, brought by lawyers for the Russell Sage Foundation, centered on a $25 household loan. The court decision freed the District Attorney’s office to prosecute 1,000 lenders before the year was out. The resolution of The Usurer’s Grip relies on just such legal action by a New York district attorney, not on the customary change of heart or poetic justice (as in D.W. Griffith’s The Usurer [1910], in which the lender suffocates in his bank vault).

Equally surprising is the film’s portrayal of an alternative institution, the “Co-operative Savings and Loan Association” to which Thomas Jenks is introduced by his next, “enlightened employer” (as the film’s publicity labels him). This benevolent fictional institution (located on nonexistent “Eden Street”) charges only 6 percent per year, which, as we see on the loan card, works out to just 38¢ for Jenks’s three-month $25 loan. The “remedial” loan office actually set up in 1912 by the Russell Sage Foundation under state provisions charged a more believable 2 percent monthly rate—and still needed underwriting to break even.

The financier and railroad tycoon Russell Sage was “one of the meanest skinflints who ever lived” (according to New York mayor Fiorello LaGuardia), but at Sage’s death in 1906 his second wife used his fortune to set up the philanthropic foundation—just to spite him, some whispered. Moving Picture World’s review of The Usurer’s Grip put this characterization more gently—“Very few of us looked to Russell Sage for active and abundant helpfulness to those in sore need”—before praising the foundation, the film, and its social agenda: “The play is admirably constructed, deeply interesting, broadly humanizing, exhibits a deplorable condition existing in our midst, [and] offers a cheering and hopeful remedy.” For the reviewer, “the only unsatisfactory part” was “that the degenerate money lender is not put away where he can do no more harm” but is merely reduced to honoring the legal interest limit. The loan shark is played with convincing coldheartedness by Charles Ogle, remembered now as the movies’ first Frankenstein monster, in Edison’s 1910 version. He is ready to take sexual favors from Jenks’s wife in place of the second payment.

The word usury, which soon fell from common usage, suggested the Biblical sin of charging interest on money. The Usurer’s Grip doesn’t make such a universal damnation but—like most Progressive Era reforms—makes an ethical case against the excesses of unregulated capitalism. Now that America has arrived at an era when obtaining a small loan is as simple as flashing a credit card and average household consumer debt exceeds $10,000 (excluding mortgages), a film about the disaster caused by borrowing $25 can seem particularly quaint. The Jenks go into debt, however, not through some consumerist impulse but because “illness is expensive” (as the opening intertitle puts it), the reason that remains the source of the largest number of non-job-loss bankruptcies. However, exorbitant-interest-rate small loans now come disguised as “paycheck advances,” and usurers have become “predatory lenders.” —Scott Simmon

About the Music
In preparing my score for this film, I came to feel increasing empathy with the victims of the story, the Jenks family. What caught me was the intense anxiety that can take over our everyday lives. The film’s modernity comes across through such understated elements as the stripping away, scene by scene, of the Jenks’s furniture and in the husband’s impulse to remove the embarrassing note left for his new employer by the collection agent (the “bawler-out”). To be sure, the story has a happy ending, but what lingers is its quiet desperation.

I tried to capture that feeling with a few darkly dramatic pieces from the silent period—especially an intense agitato by Harry Norton. He wrote 24 pieces published in Jacobs’ Incidental Music: A Practical Series of Dramatic Music for Motion Pictures (Walter Jacobs, 1918), and they are all gems. This particular agitato from the series was subtitled “For General Use”—meaning that a good pianist could make the piece fit a hundred plots in a hundred ways. The selection is perfect for The Usurer’s Grip, largely because of the way it begins—as a simple, bar-long repeating motive conveying insidious menace. I introduce it near the end of the first scene, when the husband shows his wife the loan shark’s newspaper advertisement. The ad, shown in close-up, is accompanied by the phrase played at the top of the piano’s high range and then repeated thrice—more quietly—in successively lower, increasingly “heavy” octaves. Thus is born a musical metaphor for the ease with which we can all be tempted into ruin. This phrase offers little more than a variant of the oldest misterioso formula in the book, but Norton has given the formula a sweetly deceptive, Schubertian harmonic twist, and with that the trap is set. At the end of the piece comes the strong, implacable cadence. Boom!—the trap has been sprung.

Schubert provides a musical escape by way of his Marche héroique in D Major, originally published in 1824 as one of three such marches for four-hand piano and later included (under the heading “Festival”) in Motion Picture Moods (G. Schirmer, 1924), the indispensable piano anthology compiled by Erno Rapée. Schubert’s piece is at once stirring and graceful. The work sings while it marches, becoming more of a happy wanderer’s song than a triumphant processional. It enters my score when the new boss responds sympathetically to Jenks’s plight and takes him to a respectable lending institution for help.

There are four other pieces in the score, two each on the sides of darkness and light. They are not cited here, because they are easy to understand and to feel on their own terms. —Martin Marks