Please answer both questions below to proceed to the video. Thank you.
SURVIVING REEL OF 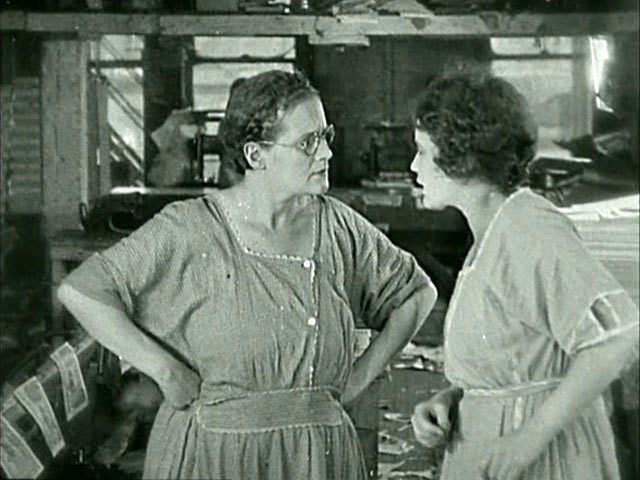 In this surviving reel from Labor’s Reward, we can sample something rare in American film: the workers’ perspective on work. The feature-length dramatization of the benefits of unionization was produced by the American Federation of Labor, which called it “the pioneer experiment of Labor to utilize films.” While such a claim forgets the AFL’s own two-reel A Martyr to His Cause (1911), among others, the reel here does seem to be the earliest surviving piece of film sponsored by a U.S. labor union.

Even though only this third reel of the original five is known to survive (along with the opening credits and a subsequent fragment), it makes for a relatively self-contained story. Missing from the start of the feature is a historical overview of the “stages in the progress from slave labor” and the beginning of the main story: A motherless family has been thrown into crisis when the father is injured at a nonunion machine shop. With no workers’ compensation pay to fall back on, the elder of his two daughters, Mary, has to work long hours for low wages at a nonunion bookbindery. As reel 3 begins, her friend Tom discovers Mary collapsed in bed from overwork.

When Labor’s Reward was made in 1925, the union movement was struggling through the oppressive administration of President Coolidge (“the chief business of the American people is business,” he famously said). The more militant unions, notably the IWW, had been suppressed by the start of the 1920s, when court injunctions also killed major coal and rail strikes. The American Federation of Labor, the sole remaining large organization of unions, had survived by promoting unions as “stabilizing” for business, by being loudly anticommunist during the “Red Scare,” and by avoiding obvious ideological stances except as revealed through its lobbying and anti-immigrant campaigns. The philosophy had been set by Samuel Gompers, who was the AFL’s president almost continuously from its founding in 1886 until his death less than a year before this film (and whose portrait can be seen over Tom’s shoulder as he speaks to the women workers in the reel’s final shots). Union membership, according to the AFL’s figures, had fallen from more than 4 million in 1920 to less than 3 million by 1924. For antiunionists such as Henry Ford and the National Asso­ciation of Manufacturers, these figures argued that workers were learning that “cordial co-operation” or management-controlled “company unions” were all that was needed. As the antiunion Los Angeles Times argued in May 1925, “The history of such plants as the Ford factory in Detroit has given the honest workman the hint as to how he can shorten his hours and increase his earnings without striking or dynamiting.”

This was the unfriendly atmosphere into which the AFL released Labor’s Reward, directing it at audiences beyond merely its committed members. The film was intended as “an appeal to both unionists and the purchasing public. It must, therefore, persuade and convince” by showing “constructive methods which tend to avoid the waste of militancy.”

The professional production was shot in Chicago by the Rothacker Film Manufacturing Company, which (under its former name, the Industrial Film Company) had since 1909 been among the first to specialize in films commissioned by educational, business, and nonprofit groups. Screenings of Labor’s Reward usually started off or ended with two nonfiction reels recounting “a short history of the advancement of labor and the activities of the A. F. of L. from its incipiency,” including its campaigns against child labor and for the eight-hour day. But as John Manning, the AFL’s supervisor of the film, argued, its heart demanded drama: “Expression in human experience adds an emotional conviction with greater popular appeal than factual presentation.” Newspaper ads also targeted mainstream audiences: “Labor’s Reward is enacted by a cast of superior artists and vividly presents the ever combating opposites in our daily life—HATE AND LOVE! PERFIDY AND FIDELITY! INORDINATION AND REASON! TRAGEDY AND HAPPINESS! Do not fail to see the picture and to hear the accompanying lecture, which describes the transformation of a world of inequity and confusion into one of Fellowship and Justice!” All screenings were free (“Tickets may be secured from your Labor Representa­tives and at the Door. BRING YOUR FRIENDS!”), and union-friendly papers assured readers that this shouldn’t put them off: “The fact that the picture is to be shown without charge is by no means an indication that it is of lower grade than those which the public cannot see without paying an admission price…. It is interesting in plot and has an attractive romance interwoven in its action.” The AFL- affiliated American Federation of Musicians provided the live accompaniment. Although there were only five touring prints, Labor’s Reward had 591 screenings in 36 states and Canada and was attended by 479,500 people between its debut in November 1925 and the summer of 1926.

The unit of the AFL most responsible for the film—and listed at the top of the credits—was its Union Label Trades Department, which explains one focus here in reel 3. Although Tom works in a union shop, he has bought a hat not made by union workers—and thus lacking a union label. According to published publicity, at some point in the film he is reprimanded by a coworker who spots the hat: “Tom, don’t you know that for every dollar you spend for non-union goods like this you are contributing to child labor, underpaid workers, long hours and unsanitary conditions? Why, you are even hurting your Mary and her little sister.” In this reel, after hearing of Mary’s oppression at her non­union bookbindery—and especially of the solidarity of her female coworkers—Tom returns the hat, replaces it with a union one, and is further inspired to become an AFL organizer. The sequences at the end of the reel—when union and employer representatives at Tom’s workplace sit around a table to hammer out their working agreement—are a bit dull, but that is no doubt part of the point: to replace the usual film images of workers gathering only as violent mobs.

Surprisingly, it is women who in this reel demonstrate the instinctive solidarity of workers (though they need Tom’s guidance to form a union). One of Mary’s coworkers at the bindery, Ann, is fired after asking for a reduction in Mary’s workload, and other women walk off the job in protest of working conditions. On one hand this female focus looks to be addressing a long-standing criticism of the AFL, which had a history of regarding women workers as low-paid competitors. The Women’s Trade Union League, formed in 1903, still maintained a separate existence in the 1920s because of the AFL’s lukewarm support. But the female focus of the reel is probably also a reflection of another intention of Labor’s Reward: to convince the public to buy products with union labels. As John Manning argued in the AFL magazine American Federationist, “Women have a distinct duty to the labor movement whether as wage earners or as purchasers.”

Reel 3 ends as the women vote to form a union. In the lost conclusion of the film, the bookbindery owner resists their demands and, after his lawyer colludes with a judge at a midnight meeting, gets a temporary injunction against the strike, although an agreement is eventually reached. Mary’s final dilemma is whether to continue working, now that she has helped achieve improved conditions, or to quit and marry Tom. (The possibility of doing both doesn’t seem to arise.) She chooses Tom and presumably lives happily ever after, consuming union goods. —Scott Simmon

About the Music
The two pro-union songs heard back-to-back during the final three minutes of the surviving reel of Labor’s Reward are the key themes of this score. “Workers of the World, Unite” (words by Mark Swan, music by Edward Paulton; Jerome H. Remick, 1913) sounds out at the close-up of the American Federation of Labor’s address on Tom’s letter. (To add to his song’s revolutionary fervor, Paulton attached a few bars of “La marseillaise” to the end of the verse.) I play the piece through the shots of the striking picketers before moving to “Let Us Unite: March Song” (words by Walter J. Millard, music by R.C. Michel; R.C. Michel, 1912). While this sprawling song has irregular phrases and some awkward harmonic progressions, it has rousing rhythms suggestive of a polonaise as much as of a march. The chorus concludes, “Let us unite! Let us unite! / With liberty as our reward, / Let us unite! / The ballot as our trusty sword, / Come, comrades, join us in the fight!” Tom’s speech might have used these very words.

To set up the finale, I used portions of “Let Us Unite” at the beginning and during the flashbacks when Ann tells Mary about her dismissal and the strike. The rest of the score interweaves several other pieces of different moods and styles. For the understated romance between Tom and Mary, I play the waltz song “Your Eyes Have Told Me So” (words by Gus Kahn and Egbert Van Alstyne, music by Walter Blaufuss; Remick, 1919). Tom’s acquisition of a union-made hat receives a lighter touch, the comic song “Where Did You Get That Hat?” by Joseph J. Sullivan (F. Harding, 1888). For the morose scenes in Mary’s home, I used J.S. Zamecnik’s “Dramatic Tension: Grief, Anguish, Etc.” (no. 7 in Sam Fox Photoplay Edition, vol. 1, Sam Fox, 1920). The driving music that underpins the two calamitous factory scenes comes from the Prelude no. 15 in D-flat Major by Chopin (from the set of 24 published in 1839). Chopin’s pre­lude has tragic power, but I would probably not have thought of using it here had it not been placed under the heading “Monotony” in Erno Rapée’s Motion Picture Moods (G. Schirmer, 1924). Perhaps Rapée, a year before unionists made this film, was already thinking about ways to dramatize the grinding effects of factory toil. —Martin Marks

About the Preservation
This reel was preserved by UCLA Film & Television Archive with funding from the American Federation of Labor–Congress of Industrial Organizations and the National Film Preservation Foundation.

Further Reading and Viewing
Steven J. Ross, who was instrumental in saving this reel and gives the audio commentary, provides a definitive history of the representation of labor in early American film in Working-Class Hollywood: Silent Film and the Shaping of Class in America (Princeton University Press, 1998). On the AFL–CIO’s ongoing union-label campaign, see wp.unionlabel.org.

The “Prologue” from The Passaic Textile Strike (1926), another rare film promoting the workers’ perspective on a labor struggle, is available in More Treasures from American Film Archives.