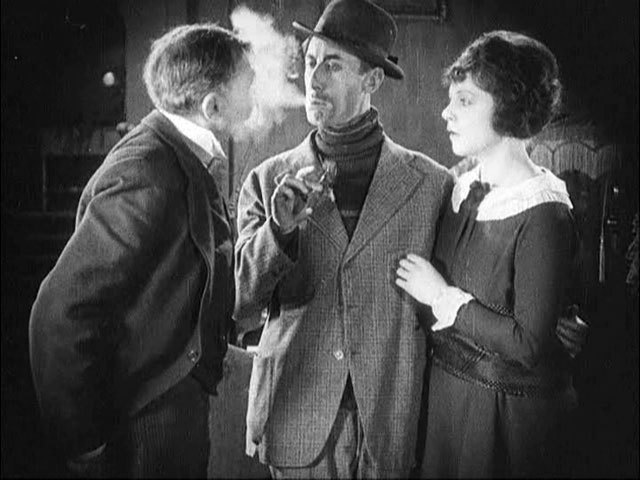 A Husband in Haste is a recently discovered addition to the long, strange filmography of William Beaudine, who directed over 600 movies and TV shows from 1915 to 1968. Starting as a general assistant at Biograph, where he learned efficiency from D.W. Griffith and comedy from Mack Sennett, he was already a practiced journeyman by the time he made the first of 54 films for the Christie Film Company in 1918.

Released under the “Vanity Comedies” banner, A Husband in Haste ostensibly follows the format outlined in Al Christie’s pamphlet The Elements of Situation Comedy, published the same year: “In studio parlance the term ‘situation-comedy’ is applied to the one and two-reel subjects in which the characters are dressed as they would be in real life, and in which their actions are plausible and based upon human motives…While there may be a little exaggeration and a little stretching of plausibility, the situations and incidents must in a general way be of the sort that might happen in real life to real persons.”

The farcical premise of A Husband in Haste stretches plausibility but remains “a credible offering,” (according to Film Daily at least): Jack (Earle Rodney) wants to marry Betty (Helen Darling) but inadvertently offends her parents, who demand “anybody in the world but that whippersnapper!” With the help of an “old time actor friend” (Eddie Barry), he makes his prospective in-laws rue their words.

Despite Christie’s aim for “courteous” comedy, viewers will likely find A Husband in Haste closer to slapstick than a modern sit-com. Its humor builds from a comedy of gestures to a boisterous crescendo complete with a chase scene and gunplay. The film’s speed, air of spontaneity, and the breezy lightness of its performances demonstrate why Hollywood came to regard Beaudine as a skilled comedy director, most notably with the W.C. Fields vehicle The Old Fashioned Way (1934). He also excelled with dramas like The Canadian (1926), while his talent for working with children led Mary Pickford to hire him for Little Annie Rooney (1925) and Sparrows (1926). Yet these classics have been unfairly overshadowed by schlock from the tail-end of his career, such as Bela Lugosi Meets a Brooklyn Gorilla (1952) and Billy the Kid vs. Dracula (1956). Respected in his lifetime for consistently delivering films on time and on budget, he was posthumously smeared as “One Shot” Beaudine. A Husband in Haste, made shortly before Beaudine’s prime, suggests that his career is best approached from its beginning rather than end.

About the Preservation
Preservation work for A Husband in Haste was funded and carried out by Cinetech under the direction of the Academy Film Archive. The source material was a 35mm tinted nitrate print found in the collection of the New Zealand Film Archive in 2010.

Further Reading and Viewing
Two other Christie comedies repatriated from New Zealand can be viewed on the NFPF website: Why Husbands Flirt (1918), also directed by William Beaudine, and A Bashful Bigamist (1920). Sparrows and The Old Fashioned Way are found on Rags and Riches: The Mary Pickford Collection (Milestone) and The W.C. Fields Comedy Collection, Volume 2 (Universal). Beaudine’s granddaughter Wendy L. Marshall authored his biography, William Beaudine: From Silents to Television (Scarecrow Press, 2005).