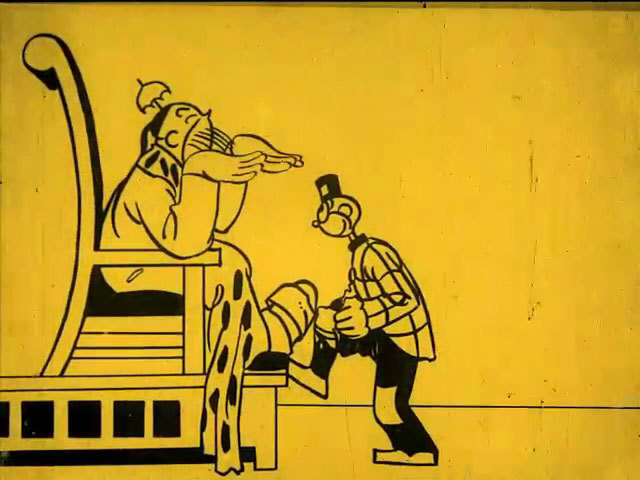 During the 1920s, Otto Messmer, Max and Dave Fleischer, Walt Disney, and a few other individuals transformed the animated cartoon. Their ideas and innovations collectively launched the golden age of American animation, establishing our cultural expectations of what an animated cartoon is and should be.

The corollary is that most of the animation preceding that golden decade—in particular, the voluminous output of cartoon studios in the 1910s—can be difficult for today’s viewer to understand or appreciate. With some notable exceptions, pre-1920 cartoons can seem utterly alien, both in content and in technique. The very concept of animated movement often seems undeveloped in these earlier films; characters tend to jump from one pose to another, with none of the refinement of movement that succeeding decades have taught us to expect.

All of which helps to explain why A Smashup in China, featuring the popular cartoon character Happy Hooligan, is a more significant film than it may appear. This cartoon was one of several series produced by the International Film Service, a company William Randolph Hearst established in 1915. An offshoot of Hearst’s newspaper empire, the IFS produced a weekly newsreel; one staple ingredient of the reel was an animated cartoon based on comic strips that ran in the Hearst papers. To supervise his animation studio, Hearst hired a young Gregory La Cava (the same La Cava who would direct such classic features as My Man Godfrey and Stage Door two decades later). La Cava, in turn, recruited a staff of exceptional artists. One of those artists was Bill Nolan, remembered today as a legendary American animator. Nolan introduced an innovation at the Hearst studio: a new style of animated movement based not on stiff, jerky poses but on rounded shapes and smooth, fluid movement—a style that became known as “rubber hose” animation.

Today we may take this convention for granted, but in the 1910s, critics and audiences were quick to take notice. “Theatres that have discriminated against ‘jerky’ cartoons have found the International process of double-animation most realistic and life-like,” said one trade review, “and audiences that enjoy really clever comedy find the smooth action and continually funny situations the very best sort of laughing material.” In hindsight it seems clear that La Cava and Nolan were paving the way for the innovations that Messmer, the Fleischers, and Disney would establish in the 1920s.

By early 1919, when A Smashup in China was produced, this improved style of animation was in full flower at the Hearst studio. We see it in Happy Hooligan’s movements as, having rescued an airborne kidnapping victim, he parachutes gently to earth, or when, later, having been flattened by an explosion, he “inflates” back to his normal volume. The IFS artists even inserted special set-piece scenes, dwelling on movement for its own sake. As we observe Hooligan’s elaborate preparations to shake the hand of the emperor, his pained gyrations when caught in the grip of the latter’s mighty handshake, and the slow transition of his hand, now a crushed mass of pulp, back to its normal state—however rudimentary these scenes may seem by later Disney standards—we’re witnessing the work of artists who took a special pride in their craftsmanship.

To compound the level of technical difficulty, this film also includes several crowd scenes, a particularly tedious and time-consuming assignment for an animator. Early-animation experts (special thanks to Charlie Judkins and David Gerstein) have identified the film in its entirety as the work of Frank Moser, another “star” animator of the 1910s.

Happy Hooligan may be little remembered today, but he was a highly popular comic character in his time. Introduced by artist Frederick Burr Opper in 1900, he enjoyed a successful run in the comics for more than 30 years. He was adopted by the movies, at least nominally, within a few months of the comic strip’s first appearance, but the IFS cartoons were the first true adaptation of the character to the screen.

Relatively few of the IFS Happy Hooligans have survived, so the discovery of A Smashup in China, in rather good condition, is an especially valuable find. Our print is missing its original main title, and the intertitles are retranslations from the Dutch, but much of the film’s original dialogue was couched in dialogue balloons within the picture—a common device in animated cartoons throughout the silent period—and so has survived intact. Too, a near century of wear and tear has taken its toll on the film’s closing gag, which now appears in abbreviated form—but the buildup to it leaves the final outcome unmistakable.

About the Preservation
A Smashup in China was preserved in 2015 at Colorlab Corp from a tinted 35mm nitrate print found at the EYE Filmmuseum in Amsterdam. The intertitles were translated from the Dutch and are modern recreations. While there is no opening title card of the nitrate print, the source includes an animated logo for the Dutch company licensed to distribute this film in the Netherlands. The restoration was supervised by the Academy of Motion Picture Arts and Sciences with funding provided by the National Film Preservation Foundation.

To see examples of animation predating A Smashup in China, check out The Bray Animation Project, which features films from the personal collection of webmaster Tommy José Stathes. Other contemporaneous examples can be found on the NFPF website: The Breath of a Nation (1919) and The Jam Makers (1919?).