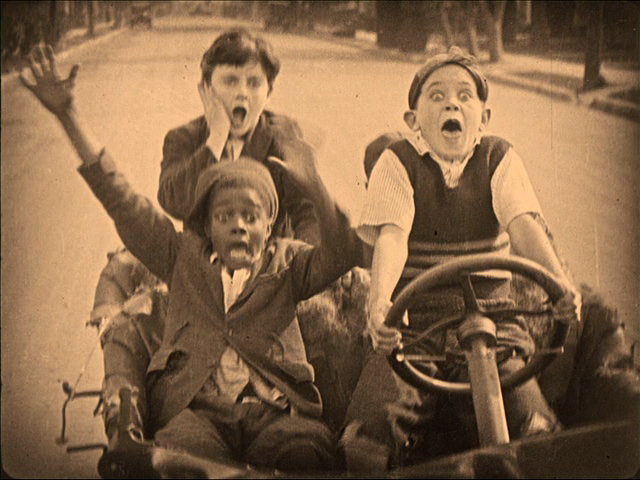 In 1922 Hal Roach embarked on a series of kid comedies, thinking “maybe I can make a dozen of these before I wear out the idea.” Our Gang ended up taking 22 years and 221 films to wear itself out (and found a second life repackaged for TV as The Little Rascals). One of many knockoff gangs that tried to copy its formula was the McDougall Alley Kids, from Bray Studios.

Heading one of the first American animation studios, J.R. Bray had already branched into live action in 1917, when he took over the “Pictographs” film magazine, combining travelogues and educational material with his cartoons. In 1926 he launched several two-reel comedy series, traveling to Hollywood to make a distribution deal with Joseph P. Kennedy’s Film Booking Office of America. For the McDougall Alley Kids he secured veteran comedy producer Joe Rock, who’d recently completed a series starring Stan Laurel.

Oh Boy!, the sixth McDougall entry, inherited most of its cast from an earlier Our Gang knockoff, the Arrow Kids. They played stereotypes familiar to the genre: the “freckle-faced kid,” the “fat kid,” the African American kid, the “sissy,” the “pretty girl,” and the “mischievous toddler.”

A review in Motion Picture News announces the underlying class conflict of the film: “Here are illustrated the social inequalities which wealth and poverty represent.” Embodying effeminate wealth is Cuthbert, who gets chauffeured around town and wears a lace-frilled Little Lord Fauntleroy outfit with glasses—the McDougall Alley kids call him the heroine’s “little girl friend,” mutilate his clothes, and steal his girl and car. Poverty is embodied by Buddy, roughneck leader of the Alley kids, who Bubbles chauffeurs around town in a jalopy. Like his counterparts in Our Gang, Bubbles has a prominence and intelligence often denied to adult African Americans in silent cinema. Yet racial stereotyping remains: though one of the gang, Bubbles often takes a servant role, not just driving but also servicing the jalopy. He also launches into two impromptu dance routines and delivers a segregation joke about sleeping “in de lower berth.”

Writer/director Harry McCoy, who’d acted for Mack Sennett at Keystone, enlivens a derivative project with cartoony props (he also steals a car gag from Buster Keaton’s The Navigator [1924]) and skilled use of off-camera space. Motion Picture News conceded “while the picture is rather trite yet it contains enough material to make an appeal to a wide circle of movie-goers […] sometimes the MacDougall [sic] Alley coterie hit the bull’s-eye with original and decidedly laugh-provoking situations and characterizations.”

Later entries, directed by Robert B. Wilcox with a different cast and without Rock’s supervision, were less positively reviewed. Battered by failing investments and a lawsuit with FBO, Bray lost heart and disbanded his studio’s theatrical units in 1928. That year also marked the release of Steamboat Willie, by an animator whose success similarly prompted dreams of an empire beyond cartoons: Walt Disney.

About the Preservation
Oh Boy! was preserved at Colorlab from a 35mm nitrate release print found in the collection of the New Zealand Film Archive in 2010. The work was supervised by George Eastman Museum and funded by the National Film Preservation Foundation.

Further Viewing
The Bray Studios cartoon Col. Heeza Liar’s Forbidden Fruit (1923) is viewable on the NFPF website, along with the Paramount-Bray Pictograph How the Cowboy Makes His Lariat (1917), which is also featured on the NFPF DVD set Treasures 5: The West, 1898-1938. The McDougall Alley Kids short The Big Pie Raid (1927) is available on the DVD Kid Gangs and Juvenile Stars (Looser than Loose Publishing).