Charming Display at Perfect Back Contest (1928) 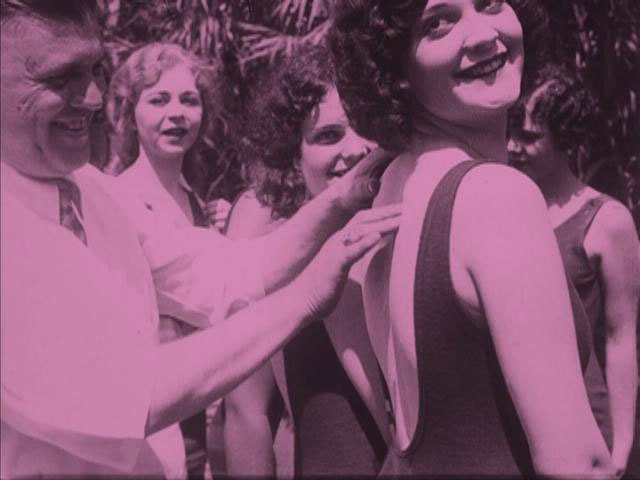 Although newspaper baron William Randolph Hearst didn’t invent the newsreel (that distinction goes to Charles Pathé), he was quick to expand his reach into the new medium of motion pictures. The February 1914 inaugural issue of Hearst-Selig News Pictorial ballyhooed the crossover by hyping itself as coming from “the greatest newspaper organization in the world.” Given Hearst’s unpopular isolationist stance in World War I, his name was dropped in 1918 and the title changed to International Newsreel. The series became a staple in movie theaters across America over the next decade, surviving under various titles until the mid-60s.

Because on-the-spot footage of “hard” news was so difficult to capture, newsreels generally featured scheduled events—parades, ship sailings, sporting matches, and visits of dignitaries. Even easier to document was “soft” news, such as golfing mothers, scenic wonders, or a performing chimpanzee. The “Perfect Back Contest” was soft news par excellence, the perfect amuse-bouche to get the audience in the mood for the latest Clara Bow feature.

Held in Los Angeles in August of 1928, the Perfect Back Contest was scheduled to coincide with the annual convention of the National Progressive Chiropractic Association. The winner Ruth Hurschler appeared in newspapers from coast to coast thanks to International Newsreel’s syndicated photo service but it is the runner-up we remember today. The second most perfect back belonged to the young Iris Adrian, who became a character actress and appeared in Gold Diggers of 1937, Lady of Burlesque (1943), Roxie Hart (1942), The Errand Boy (1961), and The Love Boat (1986). Newsreel stories like the “Perfect Back Contest” are proof that the news stories of yesteryear can have a long shelf life and remain just as fresh as—and perhaps even more odd and revealing than—they were 85 years ago.

About the Preservation
This film was preserved under the direction of the Library of Congress from a tinted nitrate print discovered in 2011 at the New Zealand Film Archive. The work was completed in 2012 by Colorlab Corp. with support from the NFPF.

Further Viewing
Because they lent themselves so perfectly to various forms of reuse, newsreels were often cut up and recombined, making the survival of original, complete issues extremely rare. A complete issue of International News from UCLA Film & Television Archive is featured in program two of More Treasures from American Film Archives.